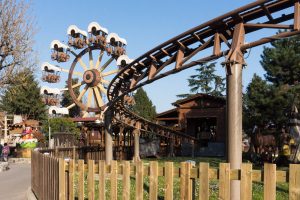 Leolandia near Milan is a pleasant family amusement park, which is run by the Zamperla family. Originally, the park started as miniature park Minitalia in 1971. In 1997, the families Triberti and Fabbri turned it into an amusement park. Since 2007, however, the Zamperla family has been running the park and with them the expansion to a theme park took place, whereby mainly rides from their own construction are presented in the park.

Fun Fact #1: The Leolandia was the first theme park of the Zamperla family. Meanwhile they run, among others, the Luna Park and the Steeplechase Park on Coney Island, New York or Luneur in Rome.

Fun Fact #2: The large scale miniature land of the park has the shape of the Italy. The centrepiece of the theme park White-water rafting with a spin guarantee