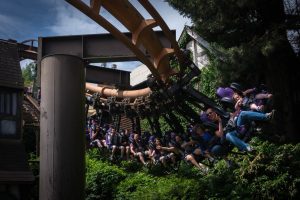 Chessington World of Adventures in Chessington, Greater London is one of three Merlin Entertainments theme parks near the English capital London. The animal and amusement park is open all year round – although the rides themselves are only operated seasonally – and can look back on a very long history.

Founded in 1931, the park houses a variety of family-friendly rides, including the only suspended coaster made by the American manufacturer Arrow in Europe. The Vampire roller coaster offers a breathtaking ride through the treetops of the Transylvania themed area.

In general, the park is very well designed and is one of the most beautiful in the country. The animal park belonging to the park is very rich in species and a species-appropriate animal husbandry is given value. This is particularly evident in Wanyama Village & Reserve, which is located near the park’s hotel and has a large prairie, which is used by the Zufari safari drive. 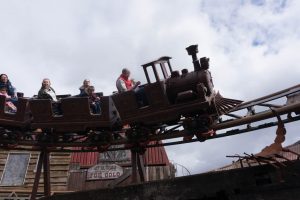 Fun Fact #1: With the Monkey Swinger it goes through the waves in a humid and happy way, as the fountains do not only serve as decoration on this wave swinger!

Fun Fact #2:Almost all the rides in Chessington World of Adventures are located in a pit so that they do not reach out over the treetops of the park. The Disk’o Coaster of Wild Asia Home of many Lorikeet The powered coaster with the scorpion sculpture 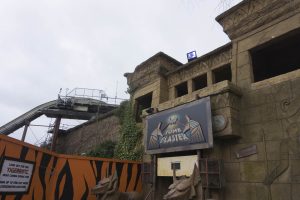 A blast by Sally 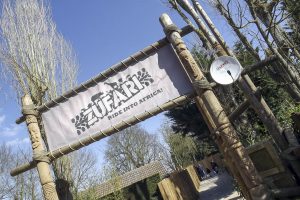 Past Highlight of the Animal and Theme Park A wash machine of a ride

The changes of the past five years

The greatest British amusement park has been under a renovation mania, or rather a transformation mania, for quite some time now; there is no other way to explain the novelties of the last five years – apart from last year’s Adventure Tree Carousel, no new attraction has been added to Chessington World of Aventures. The Runaway Train for example presents itself as Scorpion Express, the dark ride BubbleWorks as Gruffalo’s River Ride Adventure and the log flume Dragon Falls as Tiger Rock. Unfortunately, there are also retirements, e.g. the monorail, which mainly shaped the section of the park around the Hocus Pocus Hall and the Zoo, and the Ferris wheel Peeking Heights have left the park.

The start of this development was the roller coaster Runaway Train, which lost its entire artificial rock massif, which decorated the ride quite impressively beforehand. Although Scorpion Express is now standing relatively naked in the area, you can hardly miss it anymore. A huge mechanical sculpture in the shape of a scorpion adorns the back helix and creates all sorts of effects for a very fun and above all lively ride. For the entertainment of the waiting park guests there are also some terrariums in the queue, in which scorpions can be suitably admired. In total, the attraction has been upgraded; in any case, it’ s a lot of fun to go for a ride or two on the Scorpion Express.

Likewise, the squeaky duck dark ride BubbleWorks in the Transylvanian area next to the terrific suspended roller coaster Vampire was a lot of fun – let’s see what happened to it.

Originally opened as Prof. Burp’s BubbleWorks, the first 15 years were spent sailing in round boats through a lemonade factory before the ducklings of Imperial Leather took over the facility in a night and foggy operation with their sponsoring deal. In 2014, the soap manufacturer’s sponsorship with Merlin ended, after which all references to the manufacturer were removed from the parks. Although the theme of the ride could have lasted until further notice, the design elements used did not. So a new IP was needed, which is why a classic children’s book was chosen, which also fit into this theme area without much effort. In 2016 the last ride in the old design followed, before the Gruffalo’s River Ride Adventure opened on 18.03.2017.

The ride itself offers a very wholesome mixture of static design elements and video projections. The atmosphere inside is now very dense; it feels like following a stream through a forest in a little boat. The individual rooms each tell a part of the first children’s book; after which the mouse stops the fox, the owl and the snake from eating it by threatening them with the Gruffalo – a previously fictitious creature. In the following rooms the mouse meets the aforementioned Gruffalo, who would also like to eat it, but thanks to a statement by the mouse – according to which all other animals would be afraid of it – does not. Travelling together, Gruffalo and the mouse climb up the lift of the ride and then manage the shot into the former bathing room. There, they meet the other animals, who then take to their heels. This scene is successful despite the relatively open design and can at least partly retain its old charm thanks to some of the remaining fountains. On the way back to the station, the mouse chases away the Gruffalo, so that it can finally crack its nuts in peace.

Since I am not familiar with the franchise, I will refrain from making a comparison at this point. Gruffalo’s River Ride Adventure itself has definitely been upgraded and can fascinate again. The mixture of static design elements and the video projections simply works great and doesn’t seem out of place anywhere; despite the rotation of the gondola, you can actually always capture it. In general, the ride is now continuously well visited.

The Tiger Rock log flume, on the other hand, is much less popular, although this does not apply to the new and considerably larger tiger enclosure, which now uses the former open spaces of the log flume. Here, most of the work has been done, because unfortunately, the renovation of the log flume was not carried out. Thus, one floats through a channel that could have been recoated and has a great view to the animals of the (at least partly) surrounding enclosure. This is quite a thing, especially as the animals actually settle down in these areas and thus one actually has the best view from the white-water ride Tiger Rock; but it could have been more. The ride hardware is in contrast to the new arrangement of the ride and from my point of view, this is a missed chance. As Tiger Rock is the last still existing log flume of the group in England, an omission of the ride in the next years is sadly foreseeable.

Conclusion about the visit

Chessington World of Adventures remains my first port of call for the three theme parks located near London. The three major innovations of the last five years all have their raison d’être and can convince completely or to a greater extent. Since a revision of the walkthrough Hocus Pocus Hall has already been teased, one can continue to look forward to the future. Either way, you should always include the park in your UK planning, especially if you’ve never been over there and want to visit a theme park near London.

What is your opinion about Scorpion Express, Gruffalo’s River Ride Adventure and Tiger Rock at Chessington World of Adventures?  Just write it in the comment field below the report or visit our social media channels:

Changes in Chessington World of Adventures

After Chessington World of Adventures had increasingly cared for its animals in recent years and expanded the zoo area, they invested this year, in addition to the constant improvements to the amusement park, in a ride and immediately in new enclosures for African animals. In fact Chessington is more beautiful than ever before, because the Flying Dumbos, which moved last year, is now in a matching paintwork. A further five million pounds is currently being invested in further improvements to the park’s appearance, which is why the Dragon Falls log flume, the Powered Coaster Runaway Train and some of the paths are currently closed to visitors. The start of this movement is Zufari.

The big novelty this year is Zufari, an installation where you are guided in a spacious off-road vehicle, with a capacity of 30 people + driver, to an off-road track with some surprises, where you can observe some animals. Theoretically you can compare the installation with the beginning of the Jungle Safari from the Serengeti Park in Hodenhagen, before you go into the jungle and sarcasm takes over.

Zufari offers everything you would expect from a safari based attraction. After you have completed or skipped the obligatory photo shoot in the queue, you wait for the entrance to a preshow room, which actually only serves to distract the children a little from the waiting time, because the actual film is soon played. Afterwards a monkey appears on the screen, which was already visible in the movie. This monkey interacts with the audience, like for example in Stitch live! from the Walt Disney Studios in Paris. Unfortunately, the comments here are all harmless and the animation is not that good, but the children liked it.

After boarding the truck, the very jerky and funny ride starts. As soon as the vegetation here is fully developed, this part will surely give you a much greater sense of adventure than the ride has been so far. Along a non-equipped flamingo enclosure we now pass the giraffe enclosure, where strange signs have been put up on the hall, all of which warn against passing through a cave.

With a little wit and some forward and backward driving the actual safari starts now. You can see giraffes, zebras and rhinos, which will surely be seen in the big enclosure next door, which will further enhance the hotel stay at the park.

Since a path is blocked, we’re going into the cave after all. What you can expect in the cave itself is especially pleasing for the left side of the car. As known, Chessington enhances some attractions by a huge amount of water. The fact that children are only allowed to occupy the middle seats has now been cleared up, as well as why the floor was so wet when entering the car. A waterfall at the end of the cave is the reason why the cars still drip when entering the loading station is the only effect that was self-evident from the beginning.

For the water-loving English, the finale certainly rounds off the Ride into Africa, but even the German doesn’t have to worry about too much contact with water, as it is only slightly higher than the grand finale of the dark ride Bubble Works and by no means as soaking wet as the wave swinger Monkey Swinger – where the drenching fountains were unfortunately not used on the day of the visit – or the Top Spin Rameses Revenge.

What is your opinion about Zufari?  Just write it in the comment field below the report or visit our social media channels: