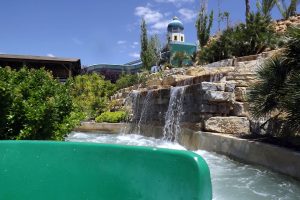 Zoomarine in Albufeira in the Algarve is one of the country’s largest theme parks. The park was founded in 1991 and is famous for its marine animal shows. Although the animal and amusement park offers only a limited number of rides and other attractions, the existing shows and animal enclosures are sufficient to spend a full day here. The park also has a small water park with two slides and a large wave pool.

After leaving the water park Slide & Splash nearby Lagoa, I reached the animal and theme park Zoomarine around noon. It exists since 1991 and should not be confused with the Mundo Aquático park of the same name near Rome. Like similar parks, Zoomarine is characterised by a large number of shows, so that despite the manageable size of the park, you can easily spend a whole day here.

When I entered the park I knew from the beginning that I wanted to see at least one of the shows, because the entrance fee is by no means low in this park either. Since the show called Flying Colours was supposed to start in about 20 minutes the time was enough to explore the park a little bit. Soon I noticed a peculiarity of the park, because the attractions in the back of the park opened staggered one after the other and so did the only roller coaster of the park.

The parrot show then turned out to be very entertaining, instructive and quite well produced. The transitions were fluid, the story was stupid, but parrots who destroy a flat are just very funny and more or less reflect reality. It’s a bit strange that Zoomarine attempts to deal with the dangers of the shrinking habitat, only to sell some animal welfare bracelets shortly afterwards. Last but not least, the tree that has been impressively chopped down is hydraulically lifted back up into the sky.

In general, animal welfare activists will not be very satisfied with the animal husbandry in this park, so a visit is not recommended for this group of people. The few animals that are shown here in the enclosures, however, have enough space for their needs. The animals shown for the presentations have just as much space in generous aviaries or basins and even the dolphins can have it worse elsewhere with their lagoon. Of course, with the best will in the world this is definitely not ideal, especially as the dolphins’ lagoon can also be visited as an up-charge attraction.

As a roller coaster, Zoomarine offers small Zamperla Powered Coaster called the Buffalo Coaster. The ride with the Twin Helix layout is beautifully designed and is a lot of fun due to its lateral forces during the two helices; luckily it was only a three laps special.

If you follow the path further on, you will come to a junction where you can either continue up the mountain and see this year’s novelty, or go down to the Harakiri dinghy slide or the almost non-existent rafting, which should open at 2 pm. At that time I had basically achieved my goal, but I decided to take the Rapid River as well. Because the Era T-Rex was not supposed to open for half an hour I took a closer look at the front section of the park.

Passing some animal enclosures I went into the aquarium Aceanus, which is quite inconspicuous from the outside. It is very close to the Sea Life centres, apart from the missing design and the very dark and exclusively blue corridors. The aquariums were all large and well populated, but the highlight here is the huge tank towards the end of the run, which can be seen from three sides. This is where you could spot some sharks.

Back in the daylight I quickly looked at the other enclosures before I decided against the pirate-style sea lion show called Wonderland and walked towards the rapid ride. Prior to this, I took a closer look at the tent of the Era T-Rex, which looked rather unsuitable from the outside. The inside turned out to be a quite solid museum with some animatronics in which guided tours take place regularly. Since I didn’t want to wait for the next group I joined another group that was already advanced in the guided tour.

Next, I headed straight towards the Rapid River, whose entrance is located halfway down the dinghy slide. You can only find it through the signs in Zoomarine, but not on the notes of the individual opening hours of the rides, nor on the park map. Nevertheless, the ride was actually open and so it didn’t take long until I was sitting in one of the round boats.

To be honest, I didn’t expect much and the waterfall visible from the outside only looked as if it would, like in other parks, wet the boat a little bit, if at all, by splashes. But as it turned out after the first few meters of the ride, this was a very wrong estimation, because in fact this small passage is enough to wet at least half of the passengers due to the rotation of the boat. The following curvy stretch is then unfortunately free of any rapids and surprises, but nevertheless, the beautiful design and the rather less beautiful foam tunnel provide enough elements to distract you and shortly afterwards to introduce the great finale. The similarities with the dark ride Bubbleworks from Chessington World of Adventures are not to be denied, but the water jets end here all inside the boat. Shortly afterwards the lift and the end of the ride is reached.

The ride, built by L&T Systems, is a magnificent and, above all, wet pleasure which, once you are in the park, should not be missed. A bit annoying is the late opening time of the ride and the resulting time spent at the park.

Apart from the individual shows, of which I unfortunately didn’t watch any more, you can also visit the small water park Zoomarine Beach and test the two water slides and the large wave pool. In addition to that, the park also offers a 4D cinema with a film about turtles, a nicely designed carousel, a small boat swing and a Ferris wheel.

Zoomarine is a park that looks quite expensive in the first place, especially if you visit it just for its roller coaster. However, if you take the time to see the shows, the aquarium and the attractions that open later, Zoomarine is a good park where the price/quality ratio is good.

What is your opinion about the animal and theme park Zoomarine? Just write it here below the report in the comment field or visit our social media channels: