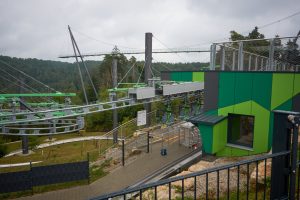 The Erlebnisfelsen Pottenstein is one of the Wiegand Erlebnisberge and is operated as a showcase by the manufacturer himself. Where initially only the Frankenrodel luge entertained the visitors, there is now a small amusement park with an Alpine Coaster, Hexenbesen and the imposing Skywalk viewing platform. 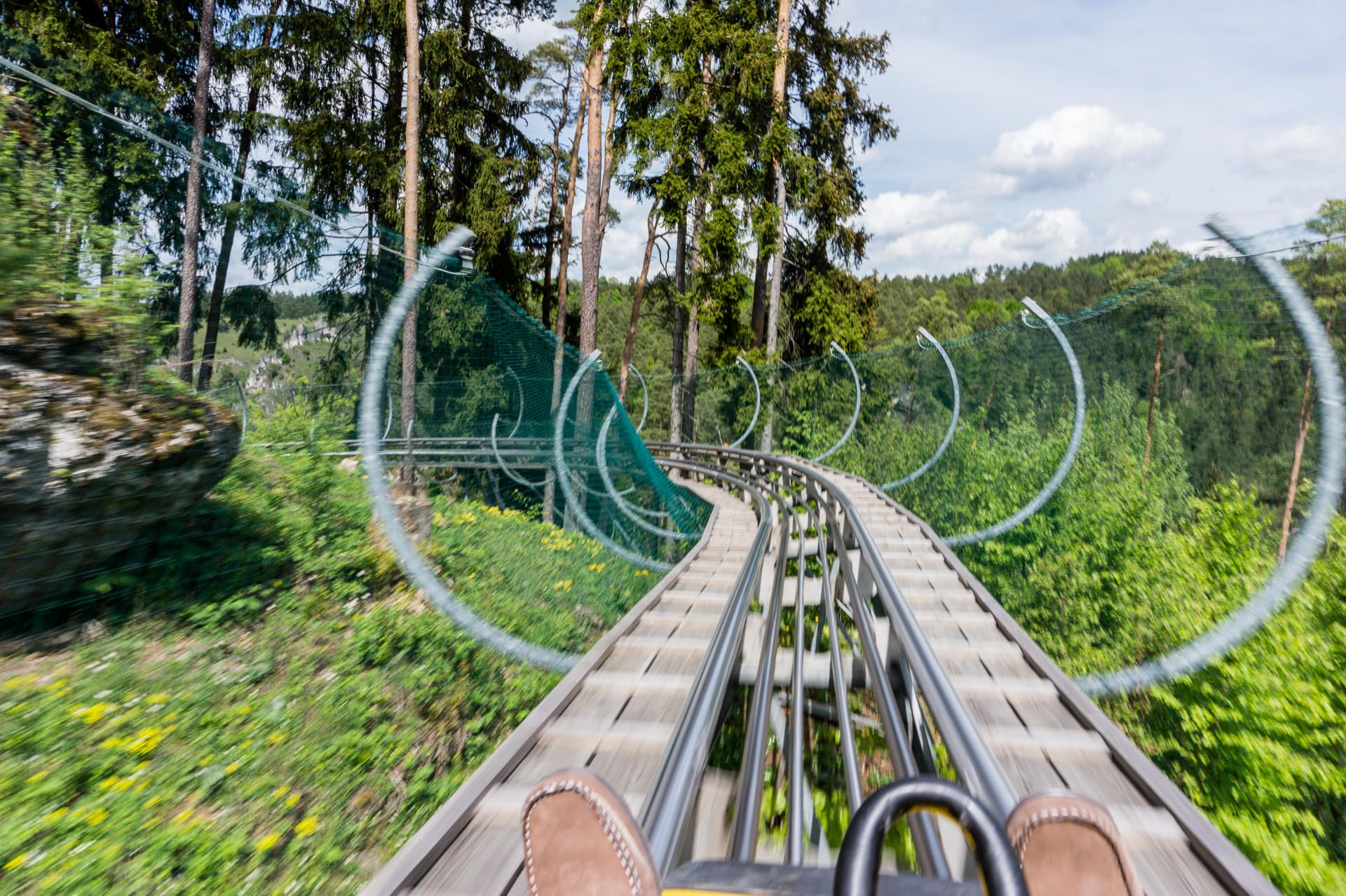 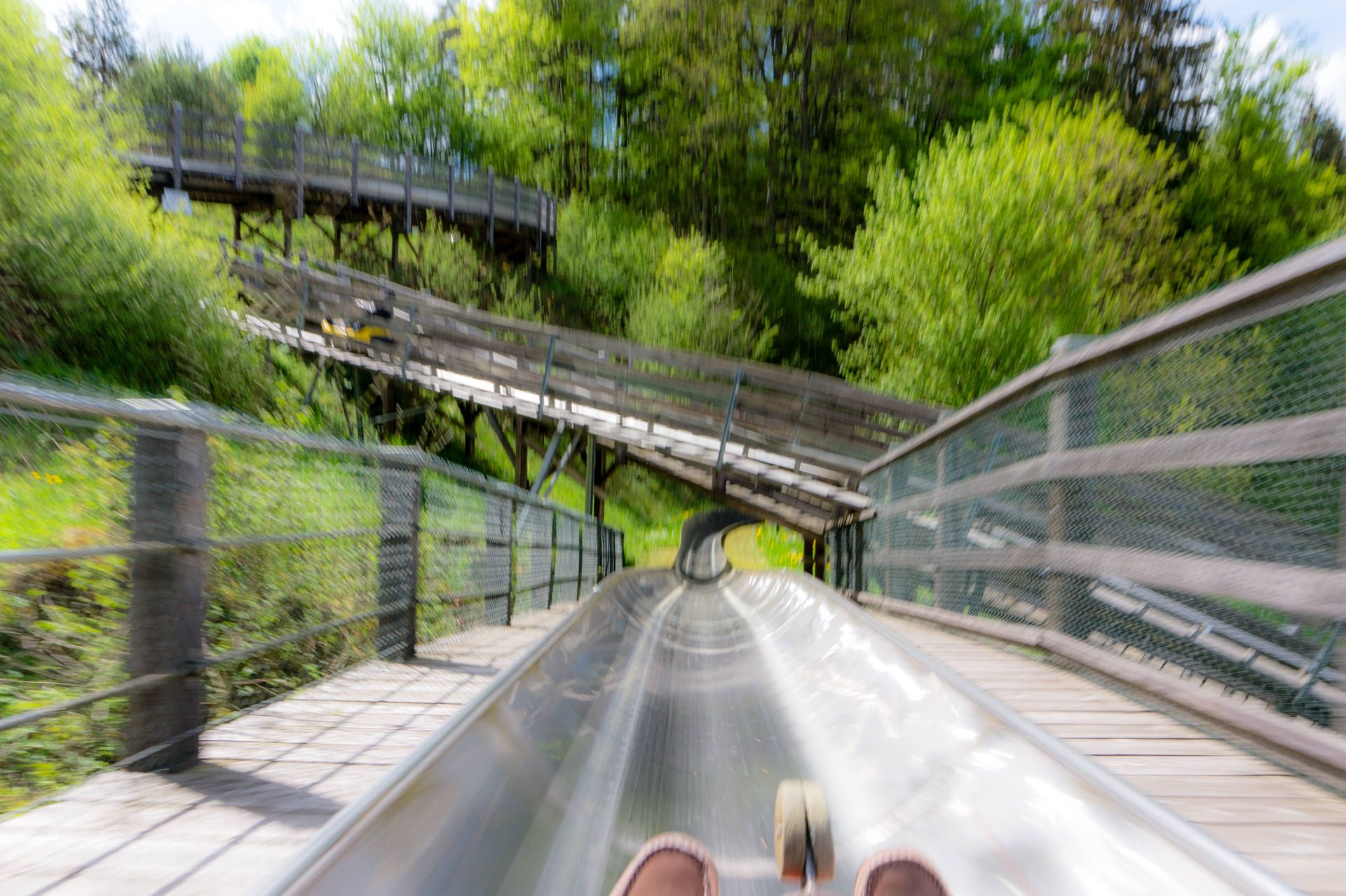 The luge of the Erlebnisberg 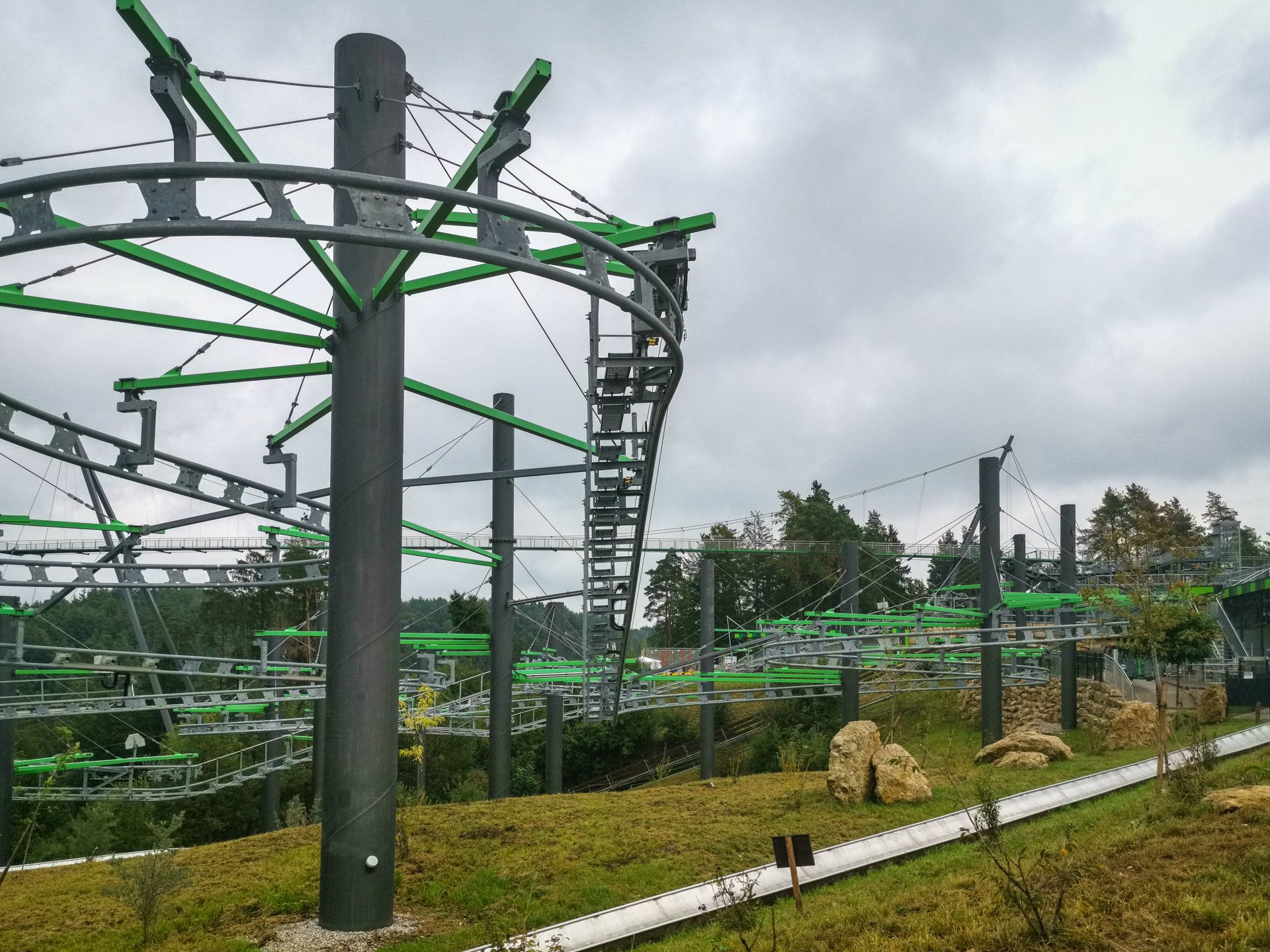 I can understand if you don’t run your luge due to the wetness of your track. I can also understand, that you don’t open anything where somebody might hurt himself due to the slippery underground and may even fall to the ground on your awesome looking Skywalk viewing platform. But Wiegand, why did you not operate your small suspended coaster Hexenbesen? It was the only reason why I had to stop at the Erlebnisfelsen Pottenstein on my way back from Munich to Hamburg and you did not operate it even though your website stated other things.

Don’t get me wrong. The route via Pottenstein is just gorgeous and I needed a break of all those road works anyways. It was interesting to see your new facilities, but it would have been nicer if I could use the bought ticket on more than just one of your rides. The Frankenbob is a beautiful looking Alpine Coaster, but unluckily it is also a rather tame one. The Frankenrodel on the other hand is just a nice luge and your Hexenbesen at least looks great and interesting. I’m pretty sure your expansion of the Rodelmekka Pottenstein was the right choice. I just can’t see it, if you don’t operate your rides at the Erlebnisfelsen Pottenstein in the late afternoon on a quiet Monday.

What is your opinion about the Erlebnisfelsen Pottenstein and the new features of the park?  Just write them in the comment field below the report or visit our social media channels:

On the way to a job interview in Munich, Vienna is somehow on the way from Hamburg. Actually, it is not even close. I just don’t like to miss a good opportunity to plan a road trip through Bavaria and Austria.

After a seven-hour drive, the trip was supposed to start at the Greuther Keller around noon, but the facility doesn’t open until late afternoon within the week. The amusement park Schloss Thurn also preferred not to open at all on this day, so that the first tour stop was at the Sommerrodelbahnen Pottenstein – a Wiegand Erlebnisberg.

Blinded by the impressive view of the runs, Jan and I immediately pulled out our purse and bought a ticket for three departures each. Since the Alpine Coaster Frankenbob had priority for us and nobody was standing in line here, the first ride was on this course. The view from the lift to the luge Frankenrodel and the upcoming meters of the Alpine Coaster are very good, but after a few meters on the downhill chute you notice very clearly that the speed is missing. After some turns and a fantastic view of the surroundings, the highlight of the ride is approaching, a section with several jumps. Thereupon, some curves will follow but this time in interaction with the luge Frankenrodel until a roundabout finally appears at the end of the ride.

The track itself is very neat from the view and in theory also because of the built in elements, but unfortunately lots of riding fun may not come up here.

Practically you can start your next ride immediately after the ride via a path in the station of the Sommerrodelbahnen Pottenstein. This time, however, the choice fell on the untested luge. Parallel to the lift ride of the Alpine Coaster, we climb up the mountain and shortly afterwards, following a right turn, we descend again. The sled picks up speed much faster, even though the swing tends towards zero during the first curves. Two jumps later this problem is solved and the sled descends the mountain with an appropriate cornering behaviour. After several undercrossings of the lift and some interactions with the Alpine Coaster, the end of the course follows.

Contrary to the ride next door, the speed on the luge track is always perfect. Due to the tighter curve radii and the Jumps the ride seems more dynamic, making it by far the stronger track for us.

What is your opinion about the luges of Sommerrodelbahnen Pottenstein?  Just write it in the comment field below the report or visit our social media channels: