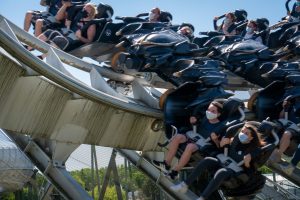 Heide Park in the middle of the Lüneburg Heath near Soltau, Lower Saxony is the largest theme park in Northern Germany. Driven by the success of the Europa Park amusement park near Rust, the showman Hans-Jürgen Tiemann built the amusement park on the site of the former Heidenhof wildlife park in 1978. The park was already a great success in its first season. As time went on, more and more attractions came to the park and by the opening of Europe’s highest roller coaster, the Big Loop, in 1983 at the latest, the Heide Park was on everyone’s lips.

The time under the Tiemann family was always associated with superlatives. They always built the fastest, longest or highest attraction of its kind. The peak of this was the wooden roller coaster Colossos, Europe’s highest wooden roller coaster. At the same time the park was sold to the Tussauds Group, which later became Merlin Entertainments. Scream, the highest gyro drop tower in the world, followed, before the park focused on German premieres with Desert Race, Krake and the Flug der Dämonen. For some years now, the company has also been increasingly relying on well-known licenses, such as How to Train Your Dragon, Peppa Pig and the Ghostbusters.

Fun Fact #1: Heide Park is closely connected with the history of Europa Park. Originally, Hans-Jürgen Tiemann’s father Otto Tiemann was supposed to run the park in Rust. Even today you can discover many similarities between the two parks. 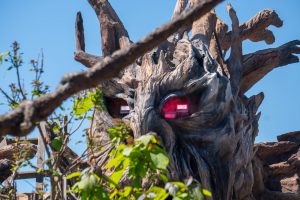 Fun Fact #2: For years Heide Park was world famous for its pile-dwelling competition in the Dutch part of the park. The Guinness World Record, which is still valid today, was also set in Heide Park in 2002.

Fun Fact #3: Germany’s biggest and most professional independent frightening group, the Boo Crew, have been shaping events such as the Hamburg Dom or the Zeit der Schattenwesen in Hansa Park as live frighteners for years, but they started in Heide Park, whose Halloween event they have been shaping since 2004. 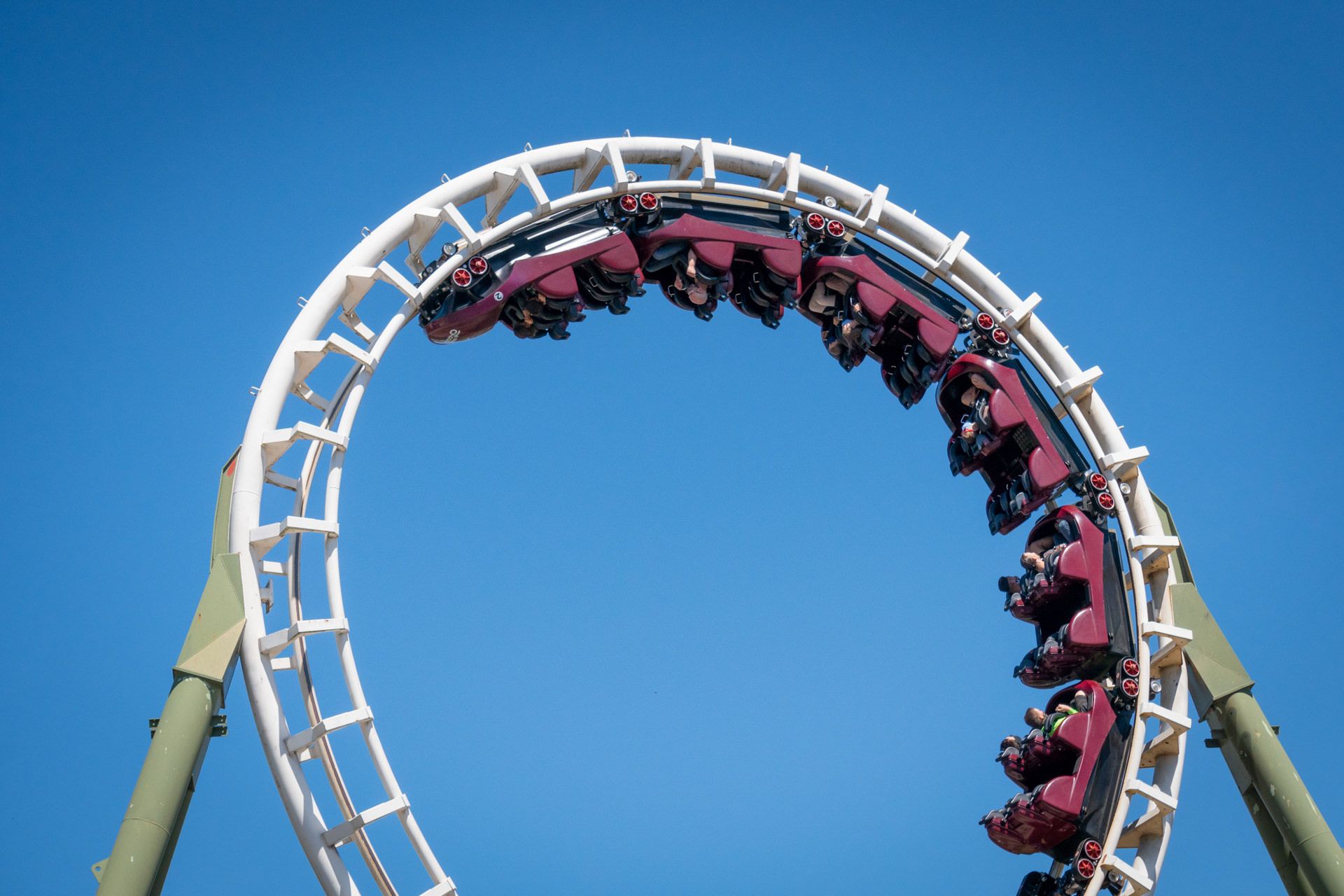 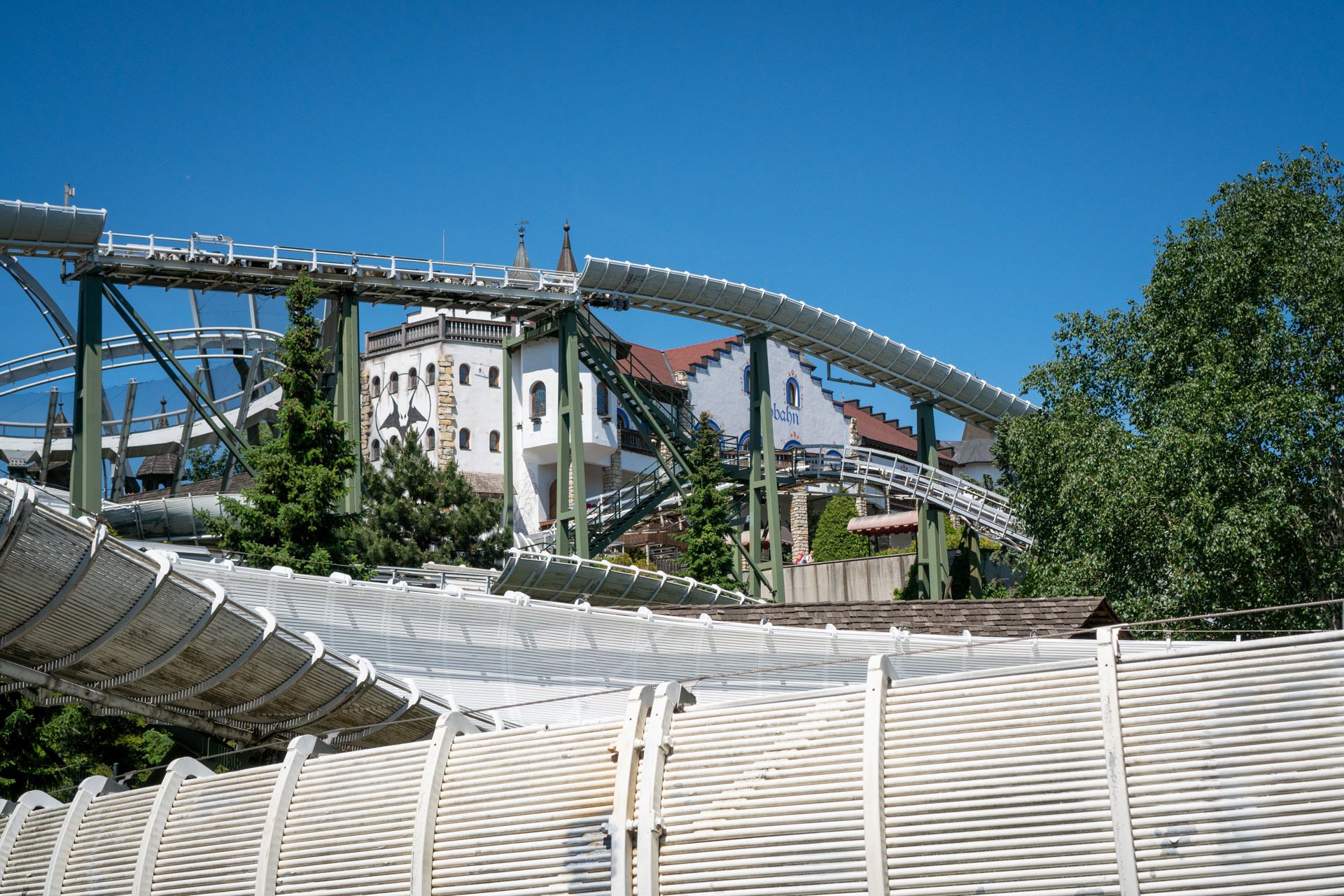 The longest of its kind 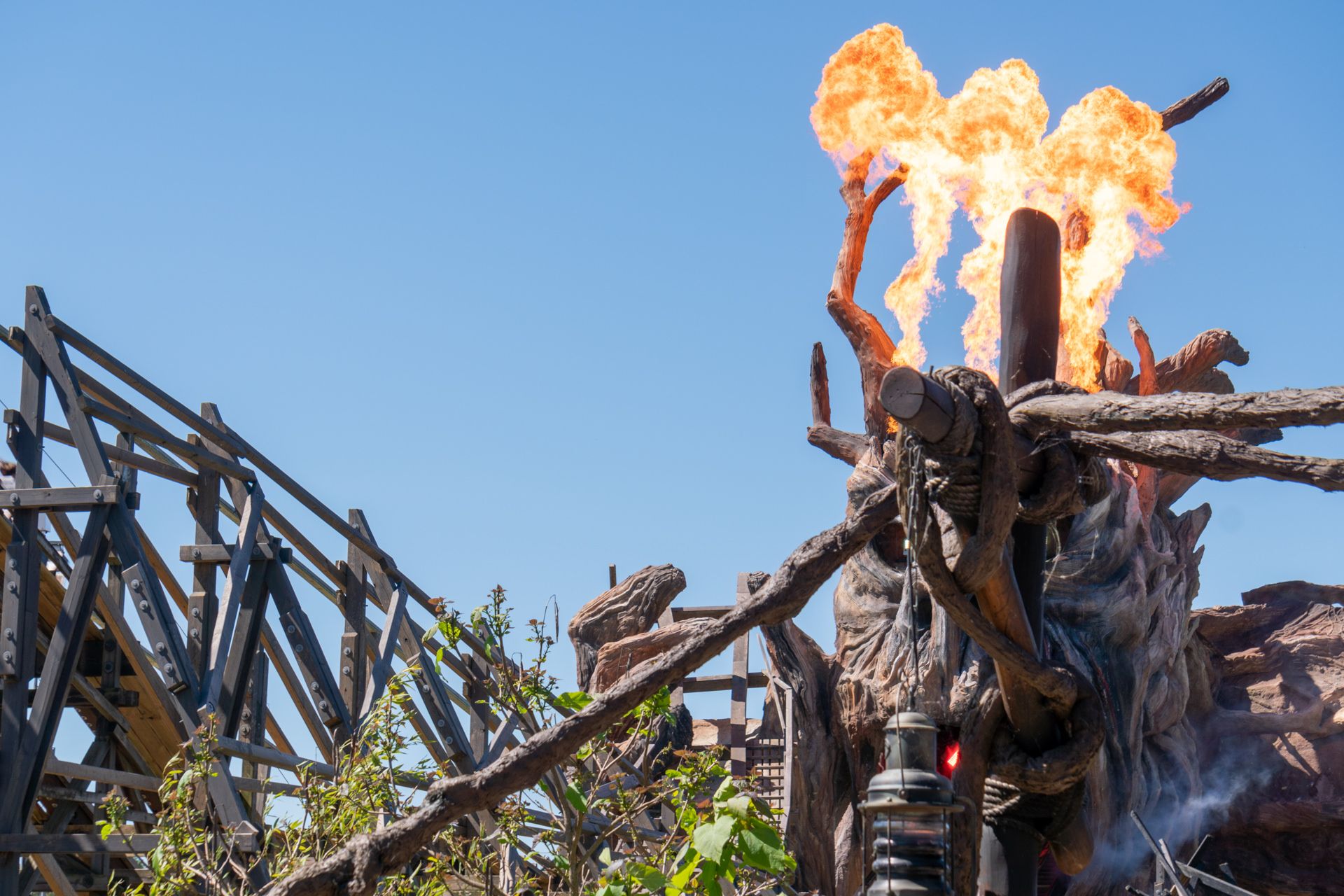 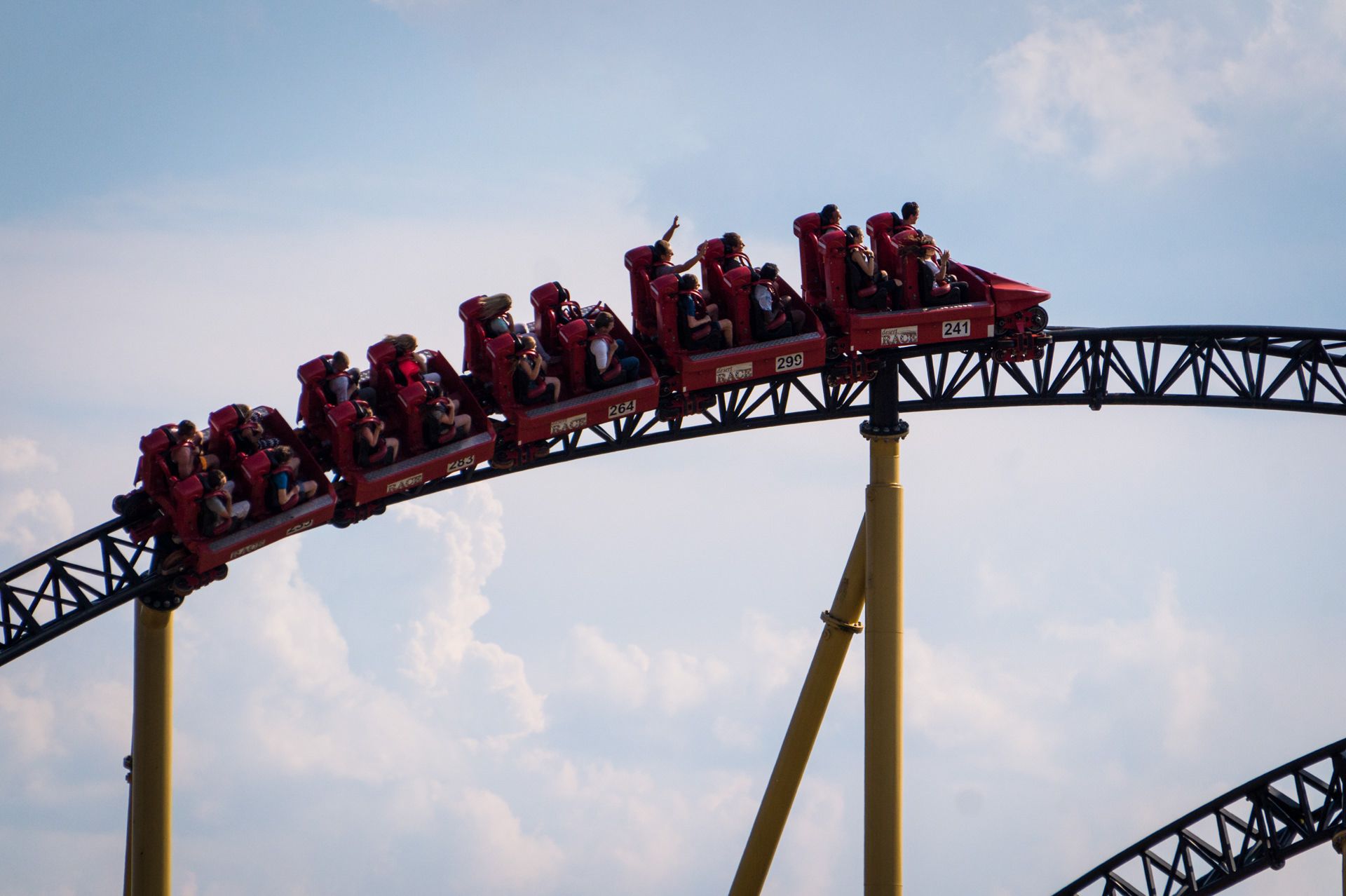 Some people call it the Desert Rita 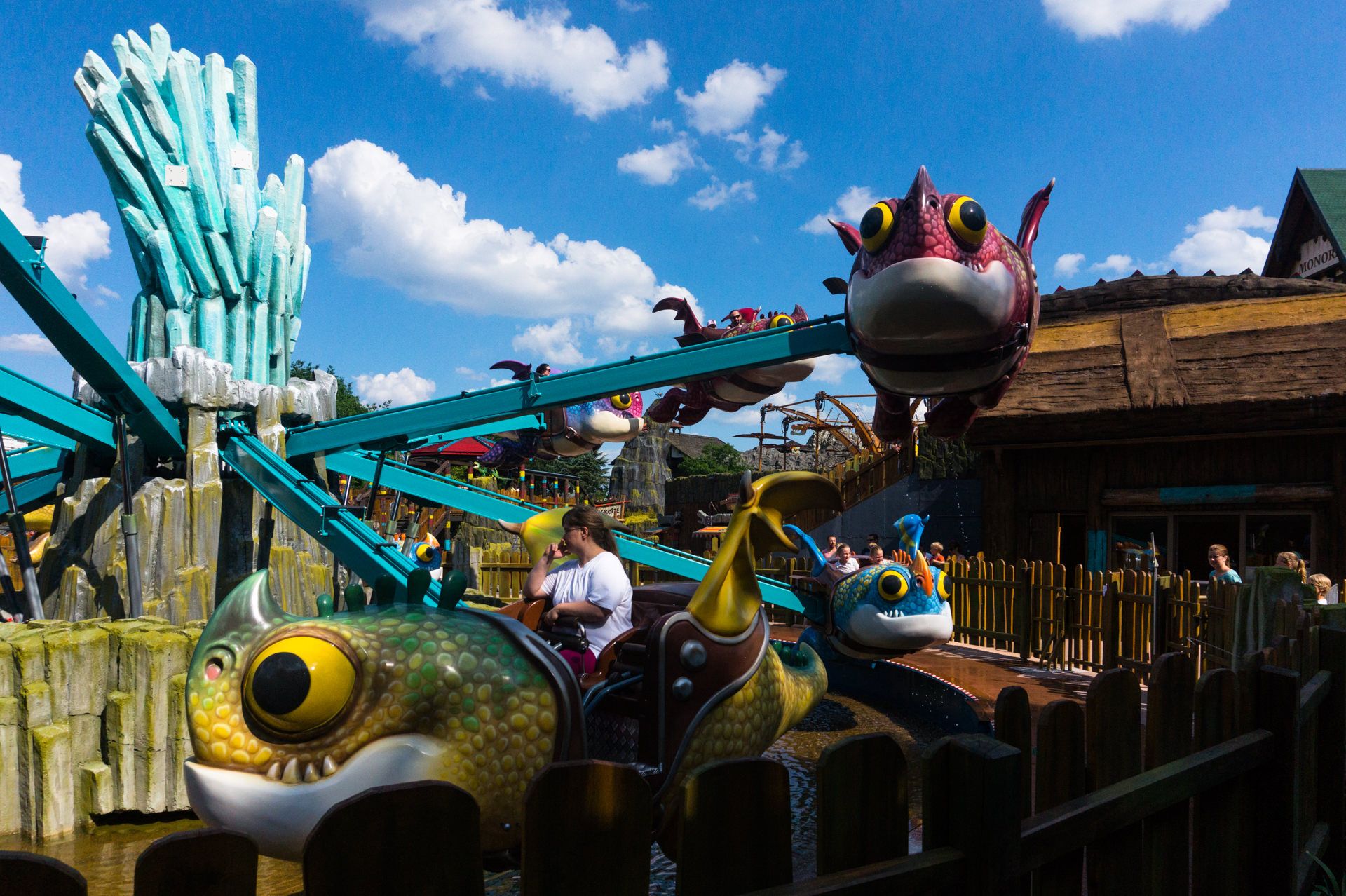 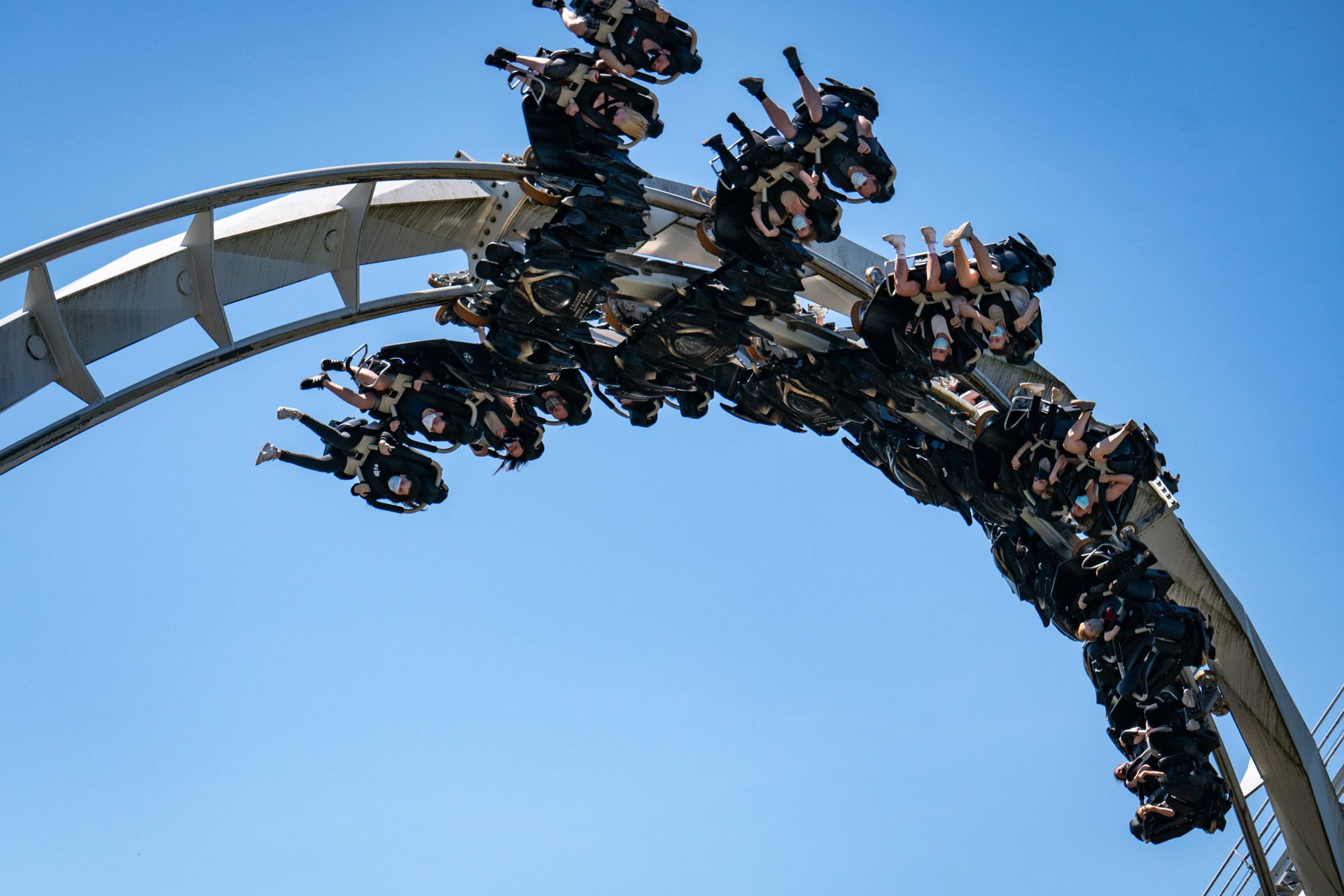 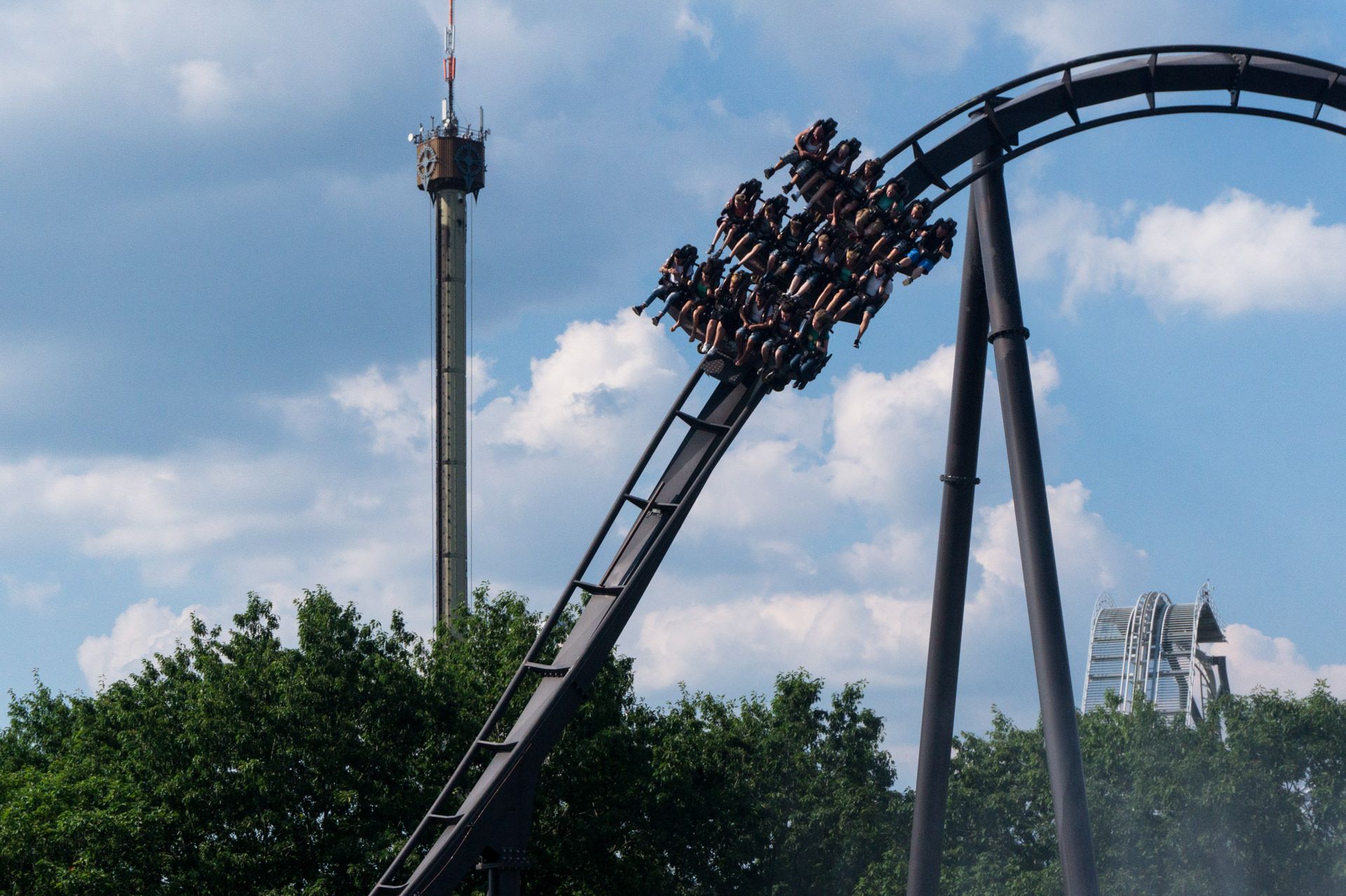 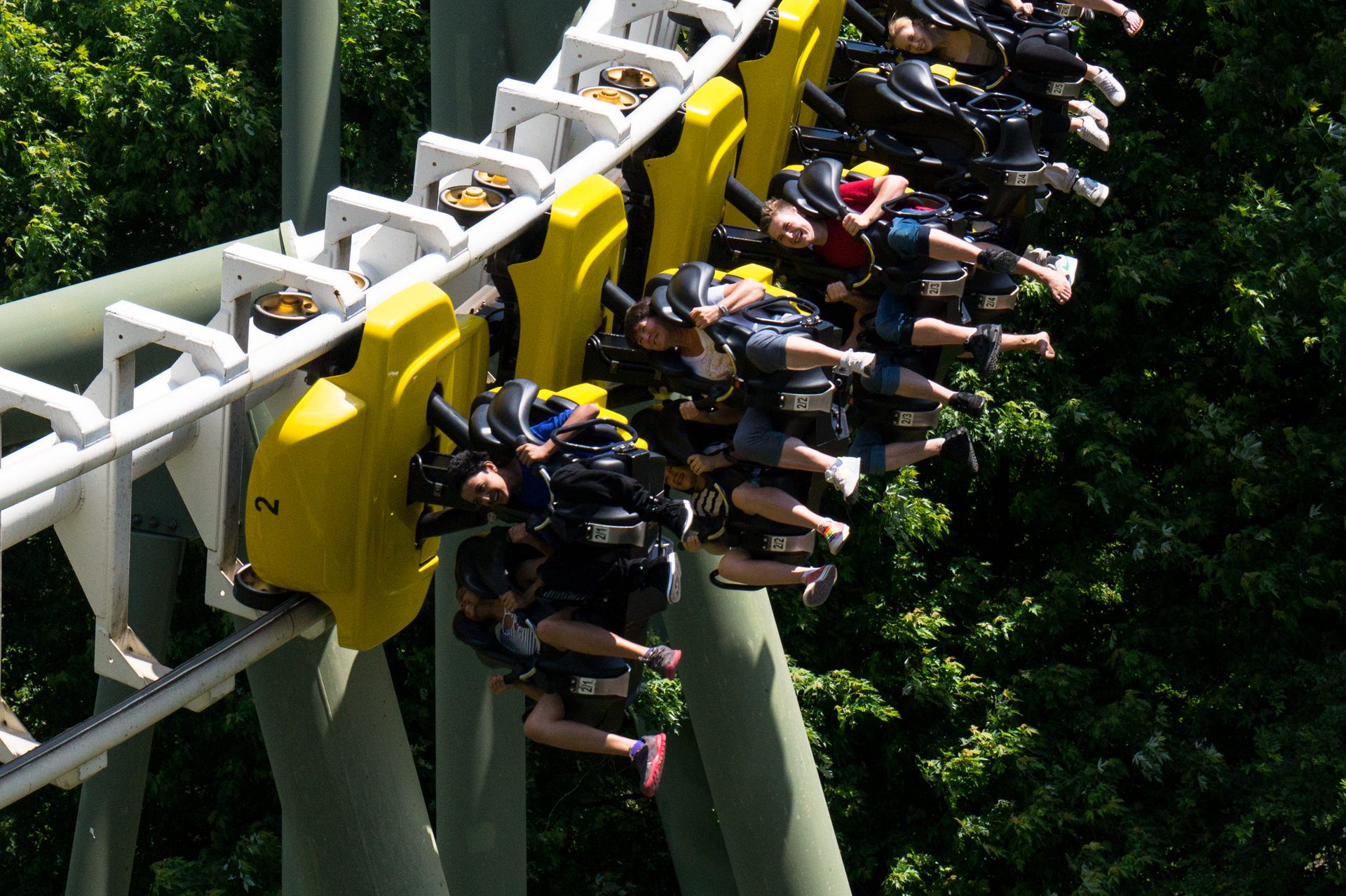 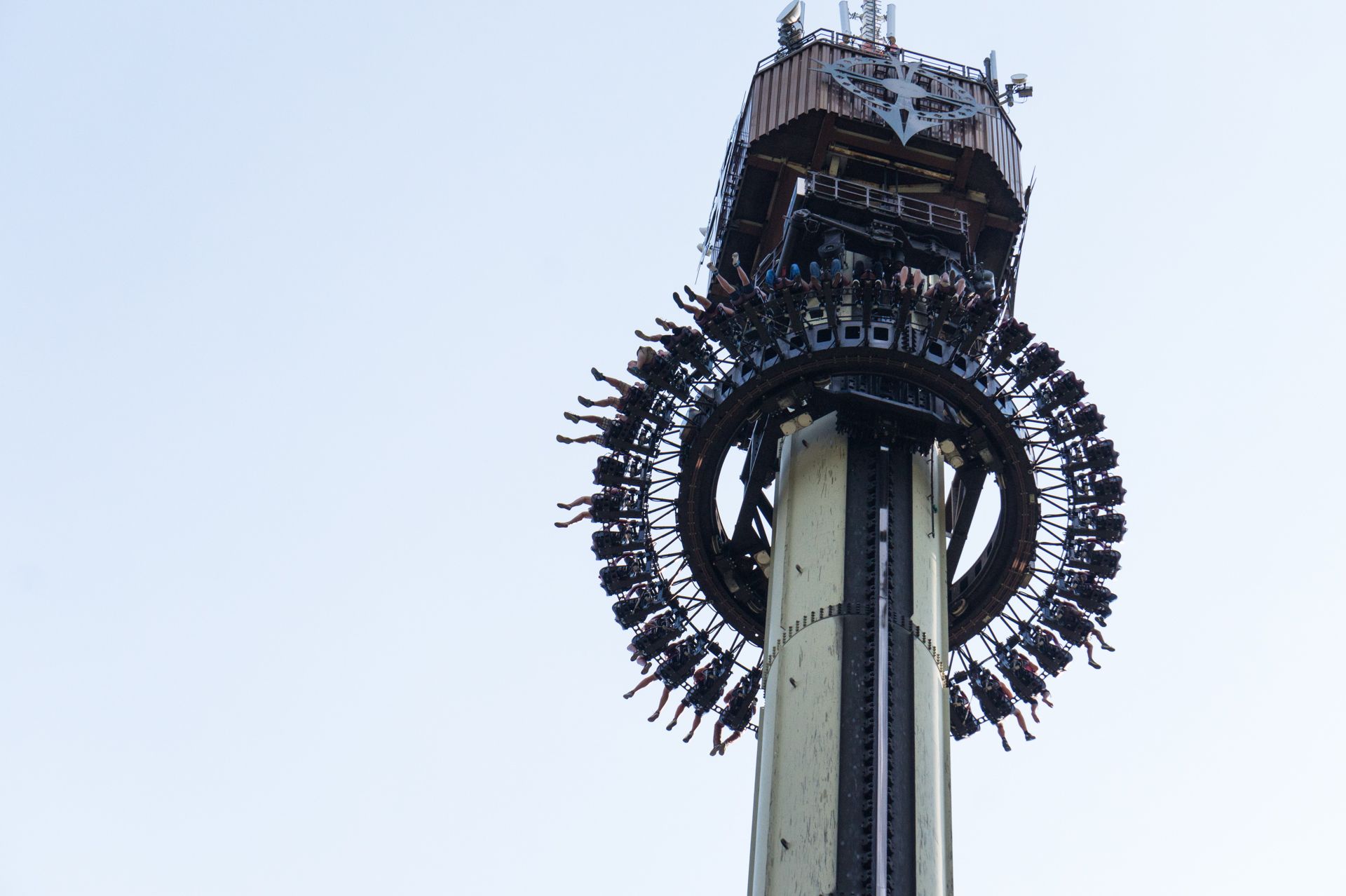 One of the best drop towers 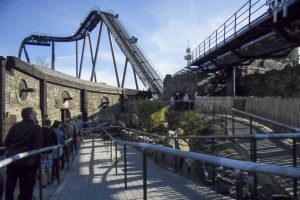 An aging wooden coaster of superlatives

Large wooden roller coasters have always been associated with problems. While they were still doing very well in their premiere year, after a few years of operation at the latest, there was nothing left of them. With Colossos, however, it was different. For far more than a decade, the giant of the Lüneburg Heath was able to pull its passengers out of their seats; thanks to the elaborate track construction. It’s just unfortunate if at some point the rail no longer has the condition necessary for operation and has to be completely replaced. However, it has to be mentioned that Colossos is the first wooden roller coaster that was equipped with this track and even the TÜV – which is a worldwide inspectorate for roller coasters – had no experience with this type of track and therefore tested the ride again and again out of line. Now, engineers are working with safeties that are many times higher than the actual load case to guarantee fatigue strength or the longest possible life span – so a ride over the track would have been safe. The park management, however, understandably considered the risk too high and the ride was taken out of service.

For the Heide Park, this was of course the worst case scenario. Even though the park is well positioned, Colossos was and is the main attraction of the amusement park. Interestingly enough, the management of Merlin Entertainments had to acknowledge this themselves first, because an immediate mise-en-budget of the wooden roller coaster was not planned. Lately, the group has not been known to repair problematic rides immediately. It’s better to put a fence around a ride and let it vegetate. Examples are the Slammer and the Logger’s Leap log flume at Thorpe Park or almost the whole Maya-Tal area here at Heide Park. But Colossos is hard to hide despite the fence. I don’t want to know how many visitors inquired about the big wooden roller coaster; but the reduction of the ride offer will not have pleased every visitor. Personally, I also did not like the fact that one of my favourite roller coasters did not run anymore, so I did not visit the park for the time being.

At some point at least, the top management gave the green light and Colossos was allowed to be rescued. To be honest, I don’t even want to imagine the damage to their image if the ride had simply been torn down. Even on a rather rough wooden roller coaster you would be happy to go different ways nowadays, but as I said before, Colossos had no incentive to do so. There was speculation in the fan forums about a RMC conversion, but the probability of that was rather low. Meanwhile, the wooden roller coaster Wicker Man opened in the sister park Alton Towers.

At the beginning of 2019, it was clear to everyone that Heide Park would breathe new life into its old wooden roller coaster. At least the publicity drum was stirred well and there were some documentaries. But there was a little bit of secrecy around one feature: The Wicker Man 2.0 or as Heide Park prefers to call it, the giant. Instead of the burning Wicker Man, which actually never burned outside of the premiere party, there is a huge concrete sculpture in the Heide Park that, in keeping with the dramaturgy of the ride, throws fire bales into the air. And yes, that is impressive. The whole make-over is impressive. Colossos suddenly has Theming.

Although I am familiar with the design with the tree-people, which was created a few years ago as a remnant utilisation around the remnants of Miss Liberty, one could hardly take it seriously. But now Colossos is absolutely immersive from the beginning of the queue to the end of the ride. In this respect, the new station just knocked my socks off.

In the station, you board the new trains, which now correspond to those of the later installations of El Toro and T-Express. This is a bit unusual, but on the other hand they are really comfortable and have some features that should make working on the ride a bit easier in the future. For the passenger it is definitely an advantage that it is no longer necessary to press down the bars. So you have some space.

After you have reached the starting height of 50m and have enjoyed the view in a wide right-hand bend, the lively interplay of very high positive and distinct negative forces can start immediately. So we skilfully plunge into the depths before we plunge through the valley and are then lifted out of our seats on the first hill. After the next valley we repeat the game again, before we turn to the back turn of the Out & Back Coaster. Here we first climb a hill after the top of which we lean to the side more and more. In a beautiful steep turn we descend rapidly before we straighten up again in a small S-curve turn and climb a hill. Directly next to the layout we just completed, we plunge down another time, whereupon we hit a speed hump – i.e. a relatively flat hill – and take off a little bit from our seat once more. After a short ascent, a longer straight line awaits us, followed by a downward helix to the left. We approach the ground faster and faster, whereupon the rapid finale of the ride begins. Here we cross a series of parabolic hills, the last one being taken by the fire giant. With airtime and underscored by numerous effects we are heading for our doom directly into the giant’s gorge. But somehow we seem to get away and then we board a rather flat turning curve back to the station, where we come to a halt in the braking section.

Colossos – Kampf der Giganten is still a great roller coaster with outstanding ride characteristics.  It rides the same way as before, but now – apart from its impressive structure – it looks simply fantastic. I honestly don’t know if you should mourn a RMC conversion now, because although these coasters are without a doubt sublime, they are no roller coasters that you should and can ride permanently – but with Colossos it’s different: It has always been sublime and gets better and better from ride to ride.

What is your opinion about the make-over of the wooden coaster Colossos? Just write it in the comment field below the report or on our social media channels:

Heide Park and the Corona measures

You can see that Merlin Entertainments is a little more professional than the medium-sized company nearby. It is therefore less surprising that the Heide Park Resort is also making exemplary progress in its implementation of the Corona measures. The entrance including instructions on how to wear your mask in the park simply works smoothly. In the park itself this is a different game, as many visitors do not want to follow the rules. Masks can be worn at will, often they only cover the mouth and not the nose. Also keeping distance is often an unsolvable task during the course of the day despite existing and clearly visible ground markings. Only in the attractions themselves the rules are respected. This is a pity and only ensures a large number of announcements.

Despite maximum capacity, the Corona measures taken result in longer queues at each attraction. The staff is visibly trying to keep the operation running at its best despite the measures taken. In this respect I would like to thank all the ride ops in the park; you guys are really great!

But as the queues were partly too exhausting for myself, I enjoyed the day with only a few rides. Especially because of that it was a quite relaxed day all in all, where a lot of videos but also some photos were taken.

What is your opinion about the Corona measures at Heide Park?  Just write it in the comment field below the report or visit our social media channels: