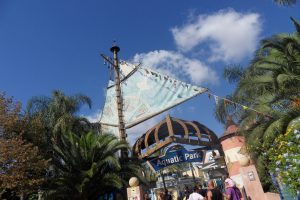 Port Aventura Caribe Aquatic Park is one of the largest water parks in Spain. The water park is located right next to the two theme parks Port Aventura and Ferrari Land and is therefore part of the leisure resort Port Aventura World on the Costa Dorada near Salou. The water park convinces with its large number of excellent water slides and its Caribbean flair.

During a stay in one of the hotels of the Port Aventura World you will have the possibility to visit the main park for an unlimited time during your visit, as well as the water park Port Aventura Caribe Aquatic Park. At least this was still the case in 2011, but nowadays the offer is focused on the new theme park Ferrari Land.

The Aquatic Park was created at the same time as the Hotel Caraibe, but is located right next to the main park. Because the temperatures were quite high and the whole coastal area had a rather unpleasantly warm climate, the urge of the visitors to go to the water park, despite the low season, was enormously high, so that the probability of catching a free lounger was very, very small.

The offer of the water park Port Aventura Caribe Aquatic Park is not outstandingly large, but not too small either. The Proslide Tifón slides in the covered part of the park were, to everyone’s surprise, damn fast and had a really well-done course.

Mambo, Limbo and the Barracudas

The bodyslides Mambo and Limbo of the same company in the outer part of the water park Port Aventura Caribe Aquatic Park, on the other hand, were rather harmless, even if they basically had a good speed towards the end. Unfortunately these slides share the same tower as the tube slides of Barracuda, so that sometimes you had to stand longer than necessary – after all the tube sliders often block the access.Unfortunately, the waiting time for the tyres was also too long, so that we decided to do without a ride.

The park’s El Torrente rafting slide is really impressive, where several people in a boat can reach slopes of more than 90°, thus involuntarily approaching each other, as the boat is not stiff but very elastic. Those who are at least afraid of a bobsleigh run should definitely not get on here, but for everyone else this family raft slide is great family fun – as long as you hold on tightly.

The park also has WhiteWaterWest’s La Laguna de Woody water playground, where you can stand under a huge bucket, the beautiful and long Lazy River El Rio Loco, and the wave pool El Triangulo de las Bermudas, with rather leisurely waves and water cannons.

What is your opinion about the Port Aventura Caribe Aquatic Park? Just write it here below the report in the comment field or visit our social media channels: