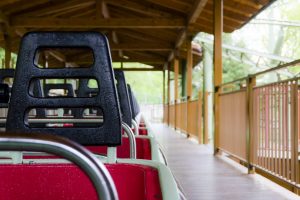 Bayern Park in the small village of Reisbach is one of the largest theme parks in the state of Bavaria. Opened as the Vilstaler Wildpark in 1978, the zoo and leisure park offers a variety of family-friendly rides, including the rather intensive launch roller coaster Freischütz or the lively white-water rafting. 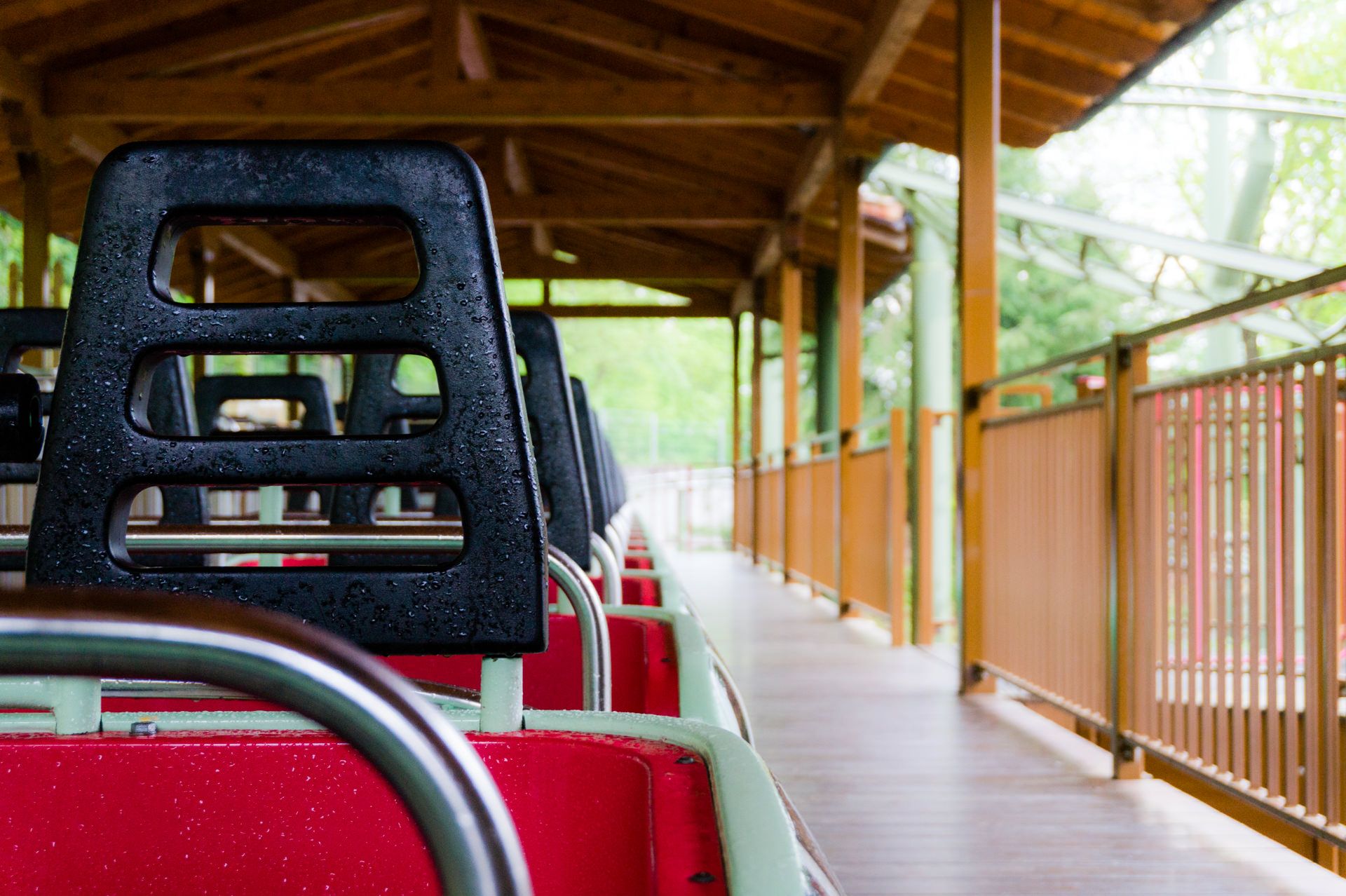 The large roller coaster with the super long train 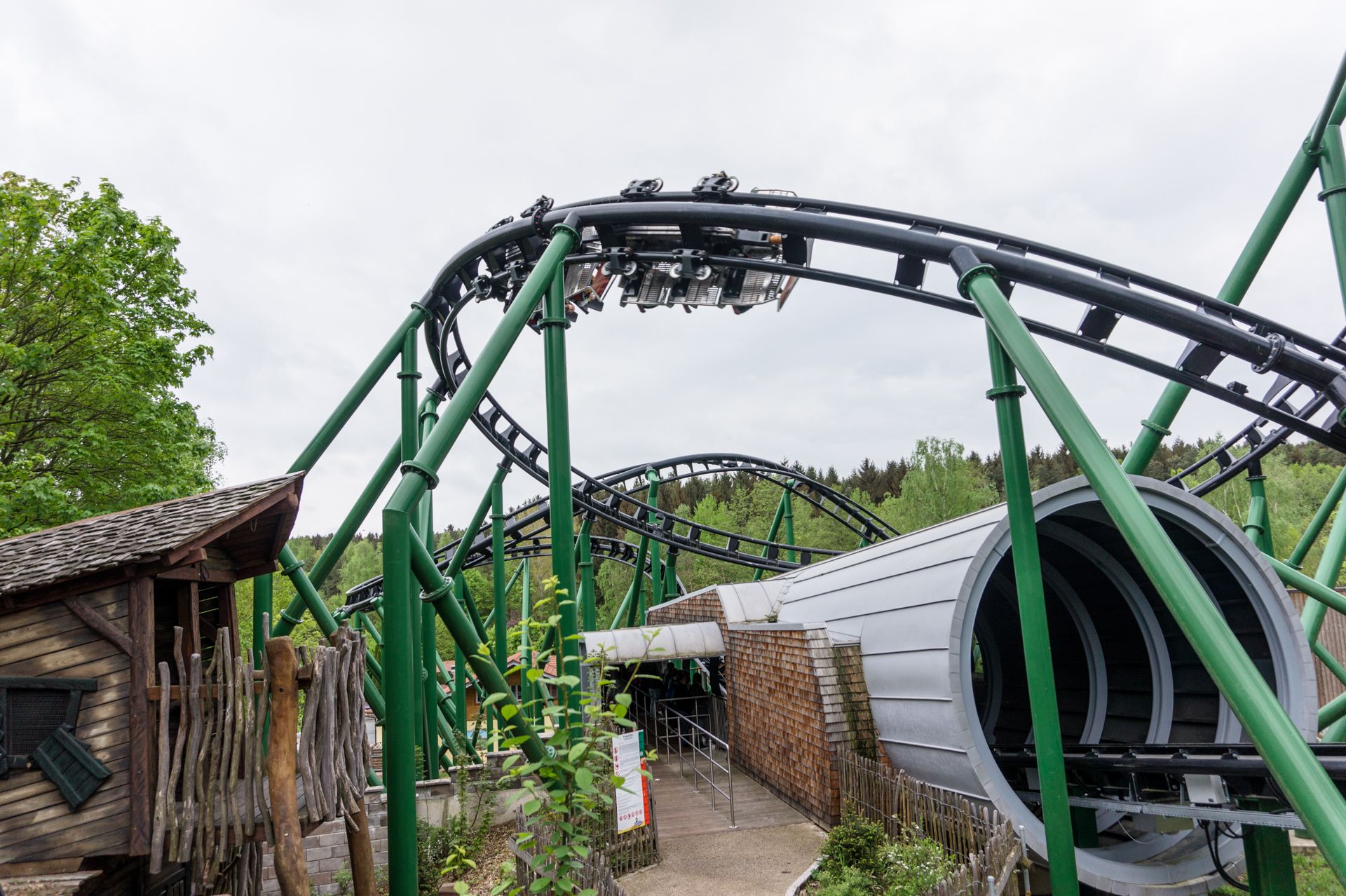 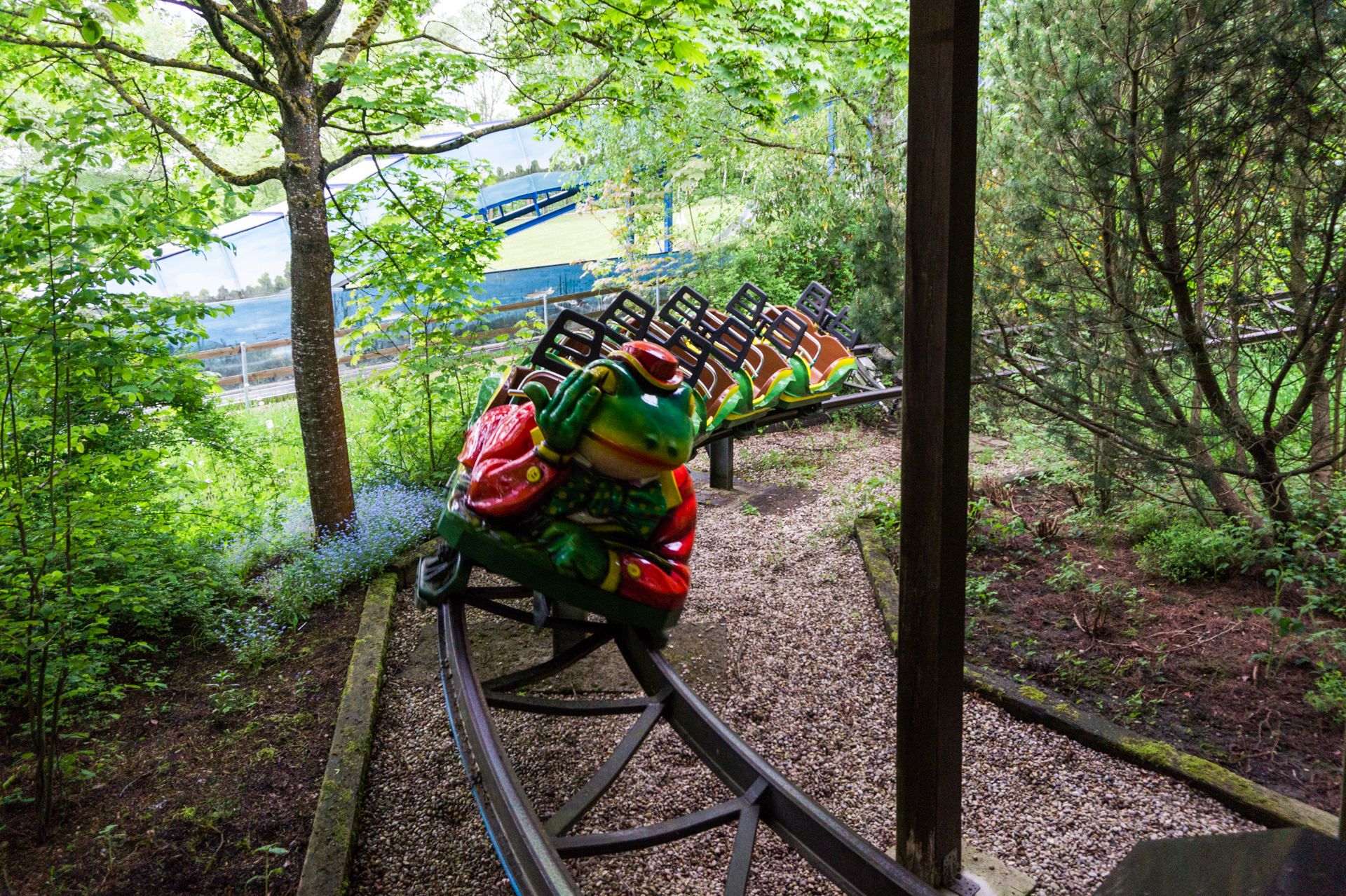 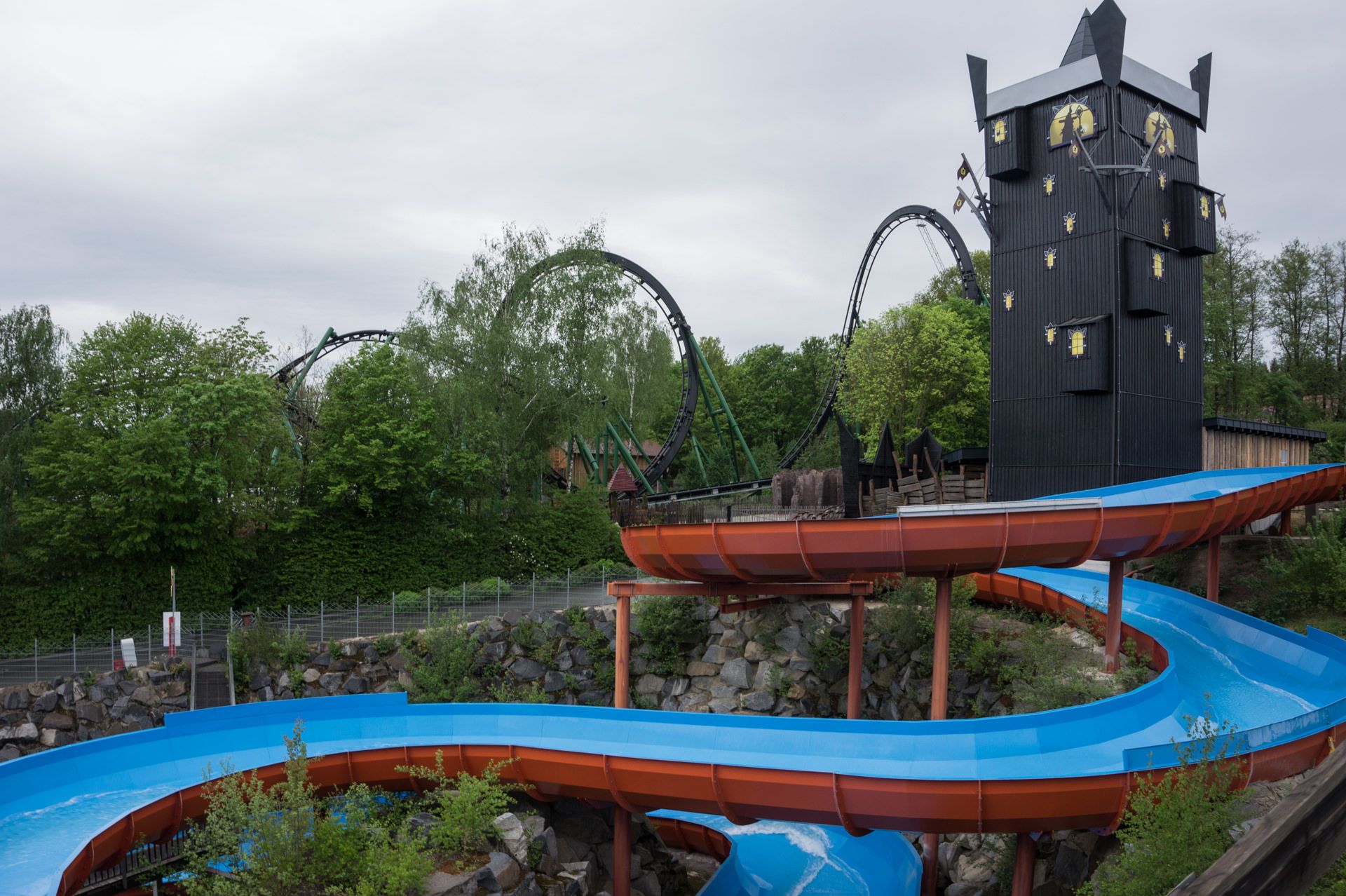 A family ride in the dark 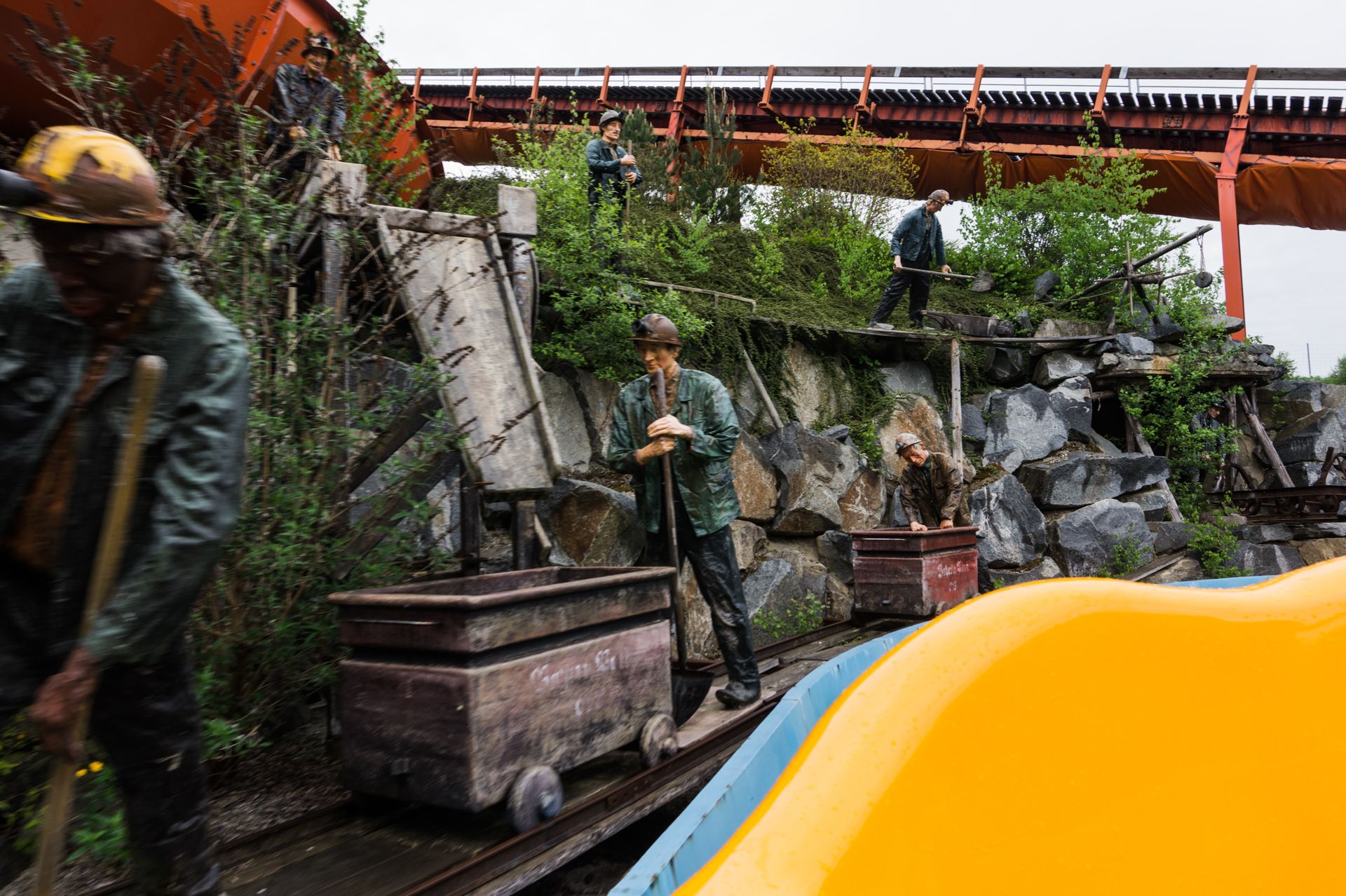 The Bayern Park belongs to one of the more highly praised amusement parks in Germany, which attracted the attention of all roller coaster enthusiasts with the construction of the Freischütz at the latest. We arrived at the park just in time for the opening, after all we only had a drive of about 6 km that day, and the first impression was quite positive at first, although the weather unfortunately didn’t want to play along like the day before.

Because the ride at most of the attractions still didn’t start at this time we enjoyed the Heege comet swings, which offered airtime en masse. Unfortunately we overlooked the complete upper part of the park with wave swinger, an arcade including butterfly in space optics, as well as the second butterfly for the time being, thus this part was only checked off towards the end of our stay.

The relevant part of the park in Bayern Park is further down anyway and can deliver the first roller coaster ride of the day with the Froschbahn. Fortunately, the small coaster by Zierer opened just slightly delayed, but still had to do some test rides. Due to a small group of youngsters the train was well filled and did a few laps on the small oval-shaped layout with a great atmosphere.

Friends of particularly long roller coaster trains will find something for themselves at the New Tivoli roller coaster by Zierer with the incredibly original name Achterbahn. This roller coaster is identical in construction with the Green Scream from the English Adventure Island in Southend-on-Sea, but rides a little better due to the later year of construction.

After the train has been dispatched without being checked, it goes up the lift hill after a left turn and the train shows itself in its full splendour for the first time. Very shallowly follows the first descent, which quickly gains speed in a right turn. A left helix follows, so that the layout results in a figure of eight. Above the station building you take up momentum again and pass the following valley quite powerfully. Another helix, this time clockwise, follows and circles the lift just before it goes straight on the shortest way to the end of the ride.

The roller coaster has a very neat layout and makes a good impression due to the strong forces, if it weren’t for the totally incompetent staff. It’s a big mystery to me why the train was completely humid despite the covered station and the staff, standing at the other end of the station just so that nobody notices that they are there, not even the idea to clean the train before the first guests were waiting for minutes for the ride. Funnily enough, even Karlos Taxi in the Danish Djurs Sommerland was cleaned by an older gentleman before our ride. But in the course of the day this competence turned out to be missing basically everywhere in the park.

After a meandering ride on the HUSS Airboat Schmetterlingstanz we went over a bridge towards a part of the park with no real meaning. Not every park can afford a totally filthy lake with a steamboat ride and an artificial castle with a Bavarian look at its edge. Through its optically appealing garden a small round boat trip takes you to a grotto where a fountain of youth is waiting for you – the hottest temptation for Americans since the beginning of Europe.

The luge of the game park

In this corner you will also find the entrance to the game park of the Bayern Park, probably the only reason why it is worth the long way to come here. Friends of luges might see it differently, but the extra charge of obligatory rides in a theme park, where even the Heege rides are free, borders on impudence. In addition, there is another installation in the upper park area. As the slope at the Olympus of the animals seemed to be too steep, we went back the same way.

Connected to civilization again we could observe the first test runs of the Freischütz, but it did not seem that the rideF would open soon. Therefore we climbed up the mountain parallel to the track, as at the upper end of this way Thalon a modified tower construction was waiting for me to explore its interior.

The ride inside the former observation tower is a Zierer Family Freefall Tower, the best examples of which are the double ride Tikal of Phantasialand or Majas Blütenturm of Holiday Park. In contrast to the brilliant fun machines, however, one tried to enhance the ride with an unimportant background story, in which one lights up scenes in different heights without any animatronics. The concept itself could be good, but for that the ride itself would have to be more dynamic and not operate in toddler mode, similar to Screamie in Heide Park. The scenes inside make absolutely no sense and can also be left out completely, which would even enhance the ride and also improve the look of the tower a lot, because the extensions for the interior scenes don’t make the tower very attractive, even though the ugly paint scheme already retouched some of it.

Next to the tower is a Zierer Kontiki in a stone look, which doesn’t really offer anything apart from the queue where you should watch your head as an adult. But admittedly, this way it fits wonderfully into the theme area Thalonia.

Below these attractions, one of the highlights of Bayern Park is on display: the ABC Rides Rapid River Splash Wildwasser-Rafting. At first glance, this beautifully designed ride seems hardly to differ from the smaller installations of the manufacturer, but a compact design was not abandoned in favour of a flow channel in front of the lift hill, including a waterfall. The lift here shows itself in a very simple version, which is unfortunately a pity, because the 45° lift of the Lost World from Erse Park Uetze is a small highlight, just like the vertical versions. At the top, the boat slowly but surely picks up speed and after the first curve combination at the latest, you are spinning like crazy. In addition, the boats have a very distinct upswing, so that the descent is very entertaining. At the end of the slide, the obligatory splash waits for the passengers, but as it is typical for the manufacturer’s constructions, the wetness of the ride tends to zero.

The second highlight is right beside the rafting course, but unfortunately, the entrance is at the other side, so that from here, one has to walk long ways up and down again, although there is a bigger open space at this side and the waiting area could just start here. Beautifully designed waiting areas do have their charms and the opera roller coaster Freischütz could well cope with a suitable area, but instead, a path below the inside tophat leads through two buildings with zigzag pathways to an open square before entering a labyrinth. After this square follows the bigger one before there are several smaller paths with different obstacles, but here only one path was open, leading to the very modern station.

As soon as you sit down in the train, it starts immediately; first a little bit forward, then a little bit backward and in a funny way only perceptible in the first car, the train slowly starts moving and is immediately accelerated forwards. Always leading upwards, it goes with a lot of pressure into the first inversion. In the following valley you are pressed into the car very powerfully, but also shaken properly. The following looping goes the way a looping should go, but often does not. Afterwards an insanely intensive Bavarian curve with a heartline roll that is just as intense is performed. A little more leisurely follows a steep turn whereupon the last inversion is completed. Another right turn later you pass through the station and with a lot of luck you are sent on a second lap through the course. Most of the time you are braked and driven back to the starting position.

The Freischütz is a very good roller coaster by the Munich roller coaster manufacturer Maurer Söhne, but it is justifiably notorious for its pronounced rocking of the cars, which is especially more pronounced in the front car of the train than in the rear car. As prospective mechanical engineers, Jan and I immediately thought of several possibilities for improvement, but these would unfortunately result in higher friction and thus a far less snappy ride. In my opinion, the intensity of the layout is grossly exaggerated despite the powerful driving style, because the greyout during the ride, which is often advertised as a core feature, was consistently omitted despite several directly consecutive rides.

Bayern Park is a well-kept amusement park with some good rides and a reasonable price/performance ratio both in terms of park admission and catering. However, a park loses a lot of sympathy points as soon as the staff turns out to be incompetent, unfriendly and above all unenthusiastic. Apparently, it is quite normal in this area, as the staff in the premium partner hotel Schlappinger Hof was the same. Sure, the Bayern Park attracts tourists and you don’t have to like them, but elsewhere you force at least one or two smiles on your cheeks while you serve your guests professionally and without grumbling – why they don’t do it here is highly questionable, although it was only one day in the off-season.

What is your opinion about the theme park Bayern Park? Just write it here below the report in the comment field or in our social media channels.