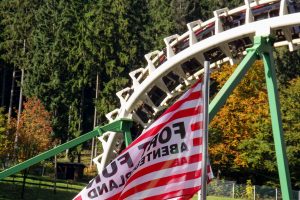 Fort Fun Abenteuerland in the middle of the Sauerland near Bestwig-Wasserfall, North Rhine-Westphalia is a medium-sized amusement park that has developed from the western city Fort Fun City. Even today the western city is still the figurehead of the amusement park. With its large number of family-friendly rides – including the breathtaking Trapper Slider summer toboggan run – the theme park, which belongs to the French Looping Group, is an ideal destination for the whole family.. 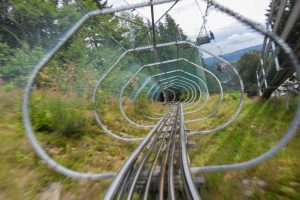 Fun Fact #1: The Fort Fun Abenteuerland is a seasonal amusement park, but can offer additional attractions all year round. For example, you can ski here in winter or visit the indoor playground Fort Fun L.A.B.S.

Fun Fact #2: The theme park offers a drive-in cinema on selected days. Current films are shown, as well as a selection of classic blockbusters. In addition, during the Covid-19 pandemic, church services, comedy shows and concerts were shown. 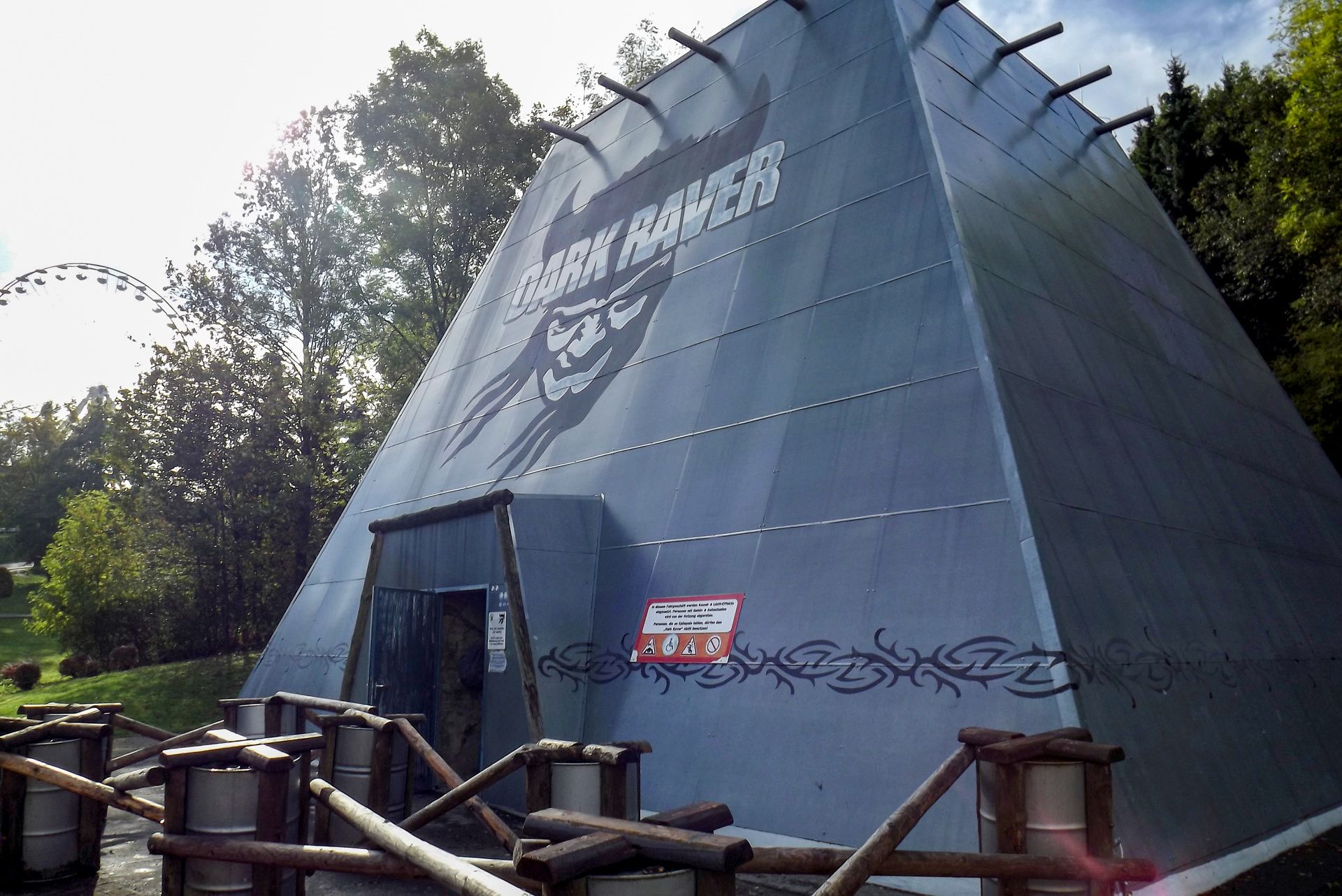 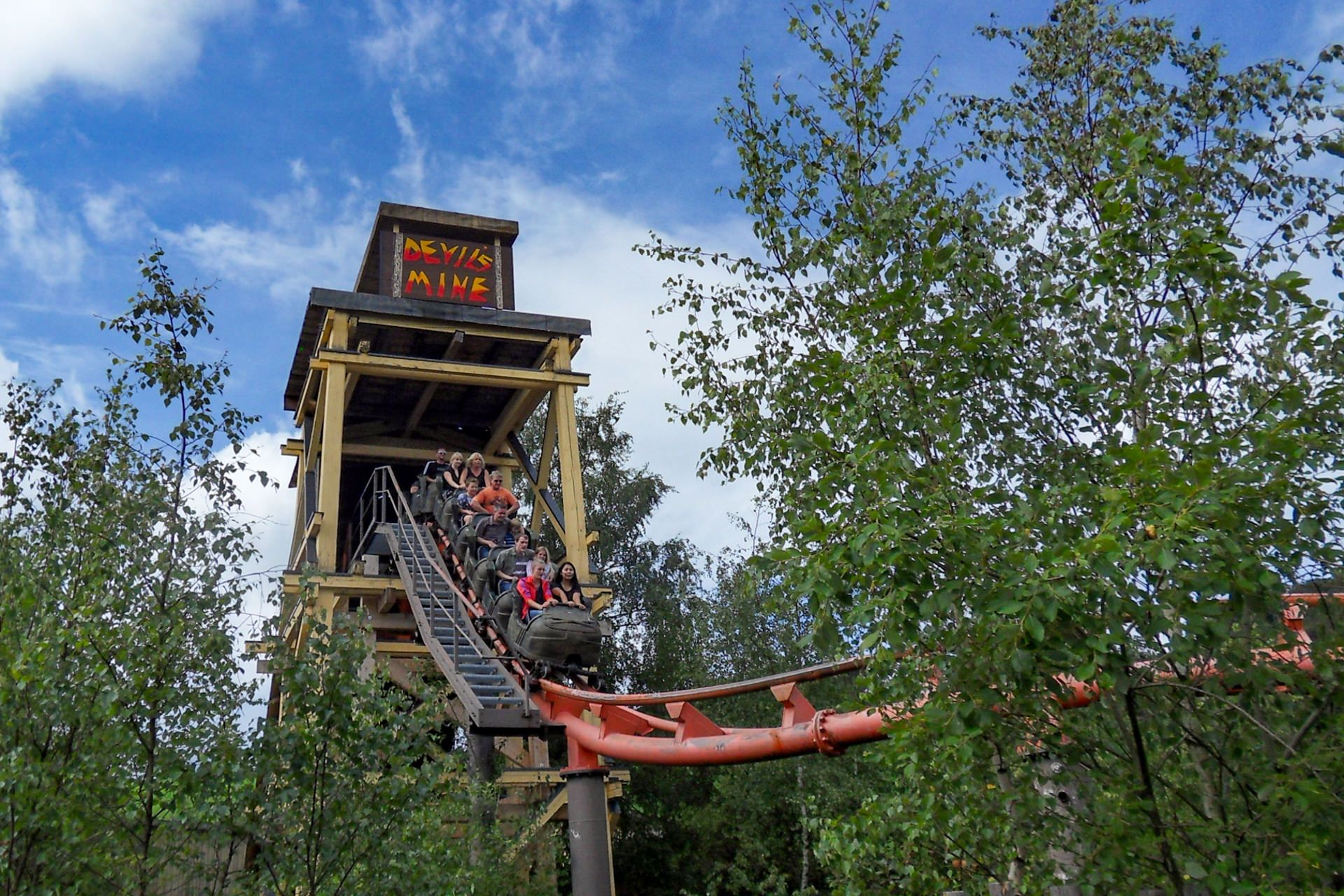 The family roller coaster with the crooked queue 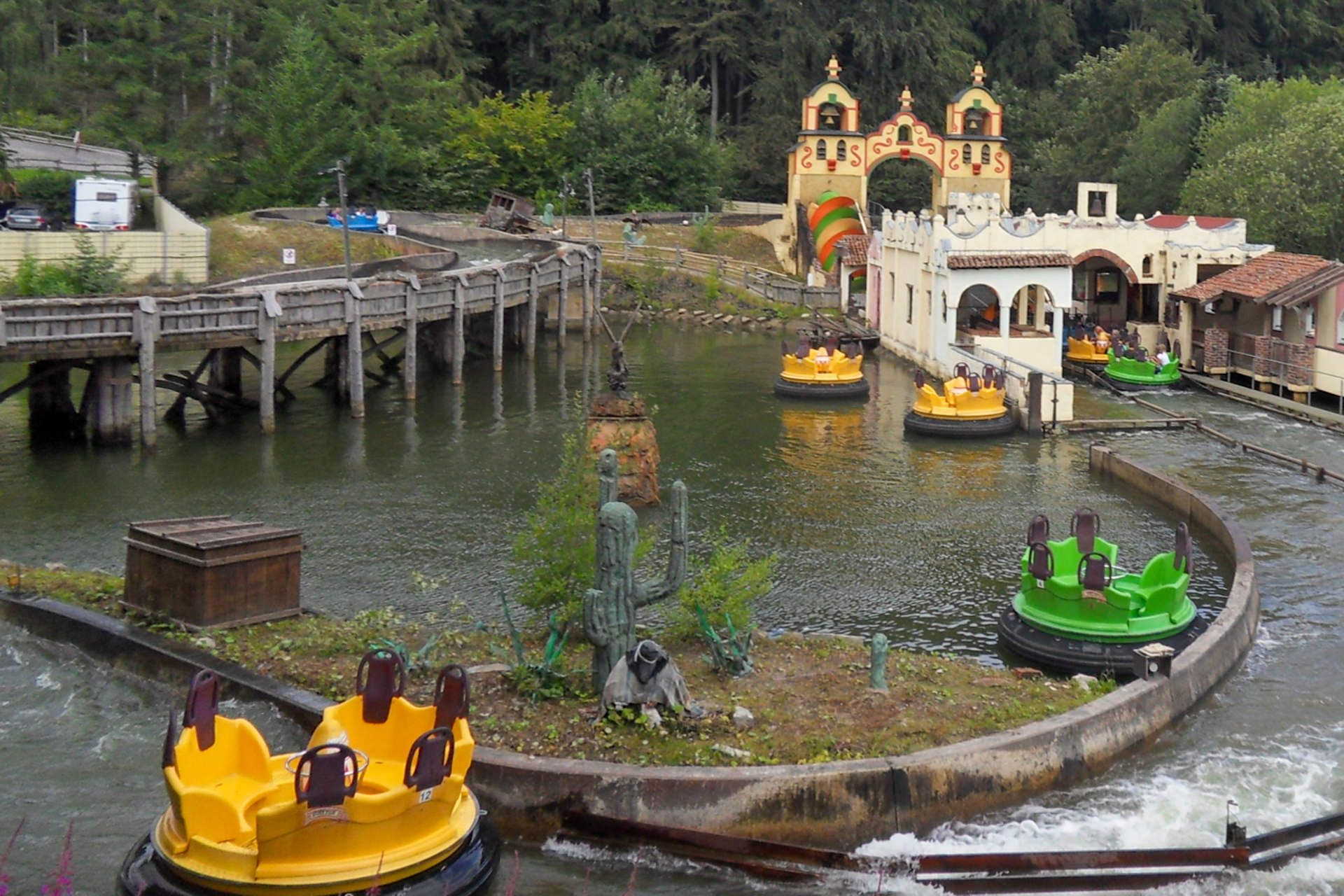 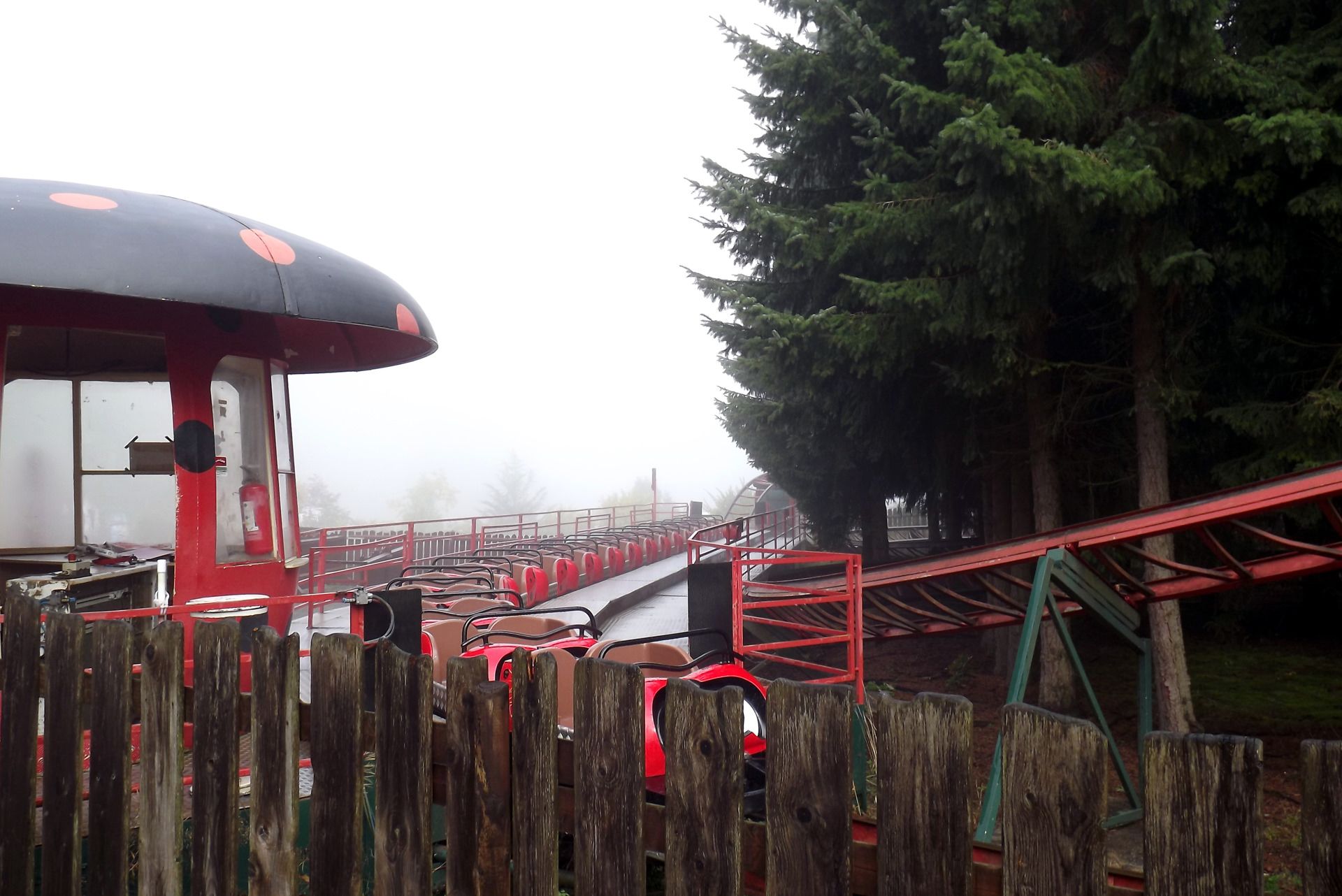 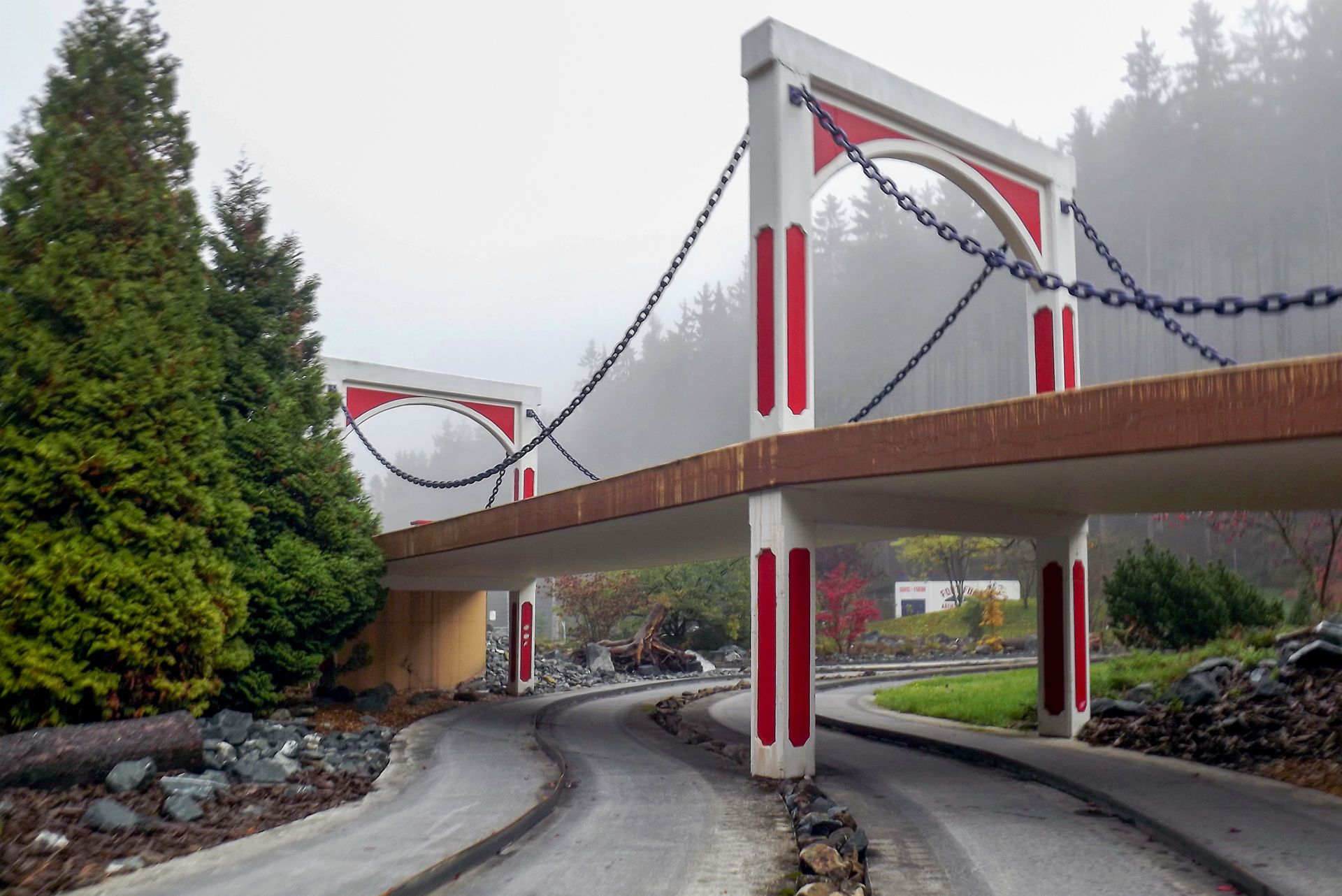 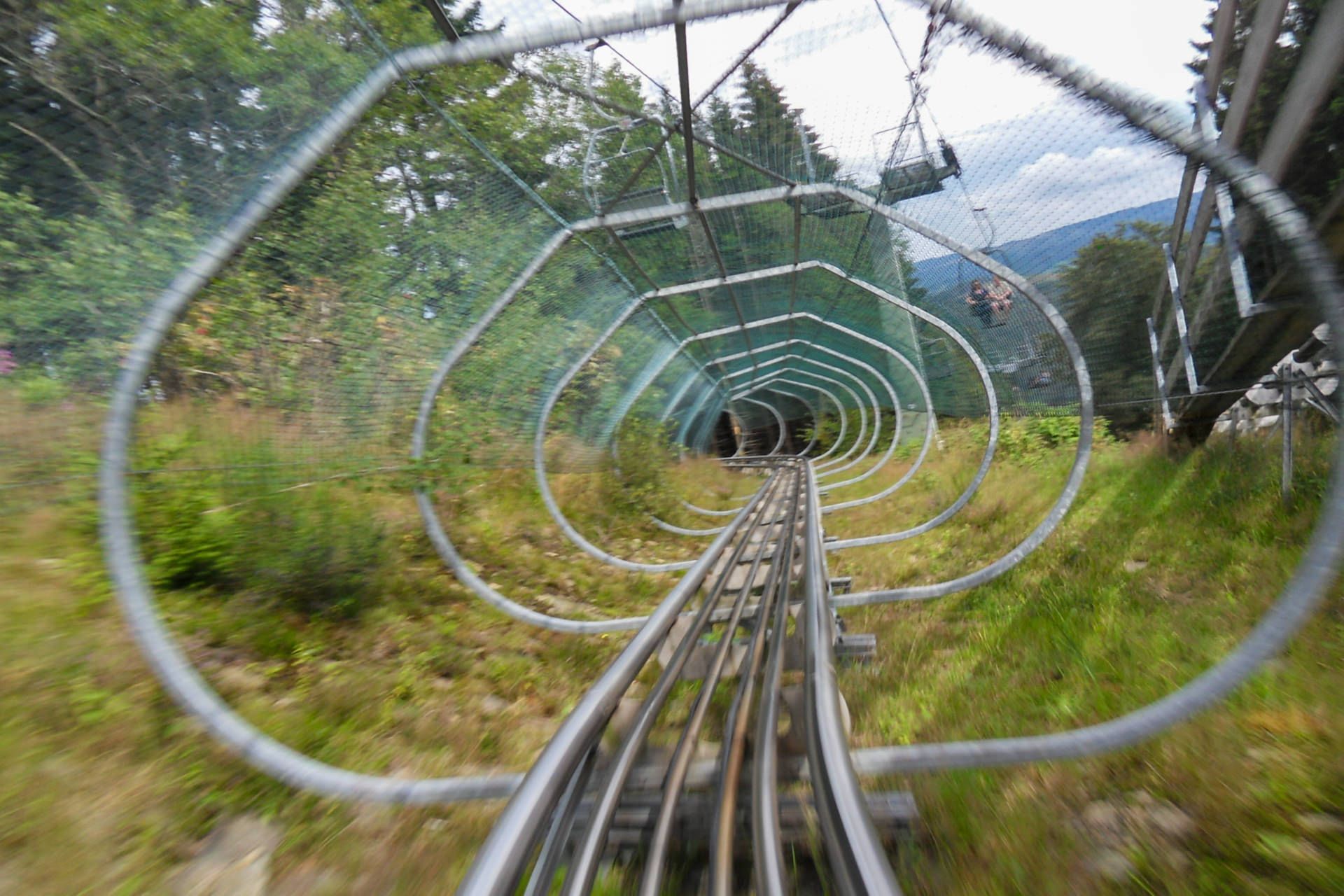 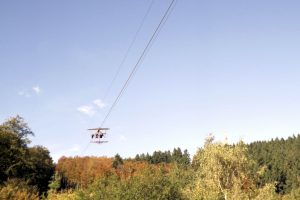 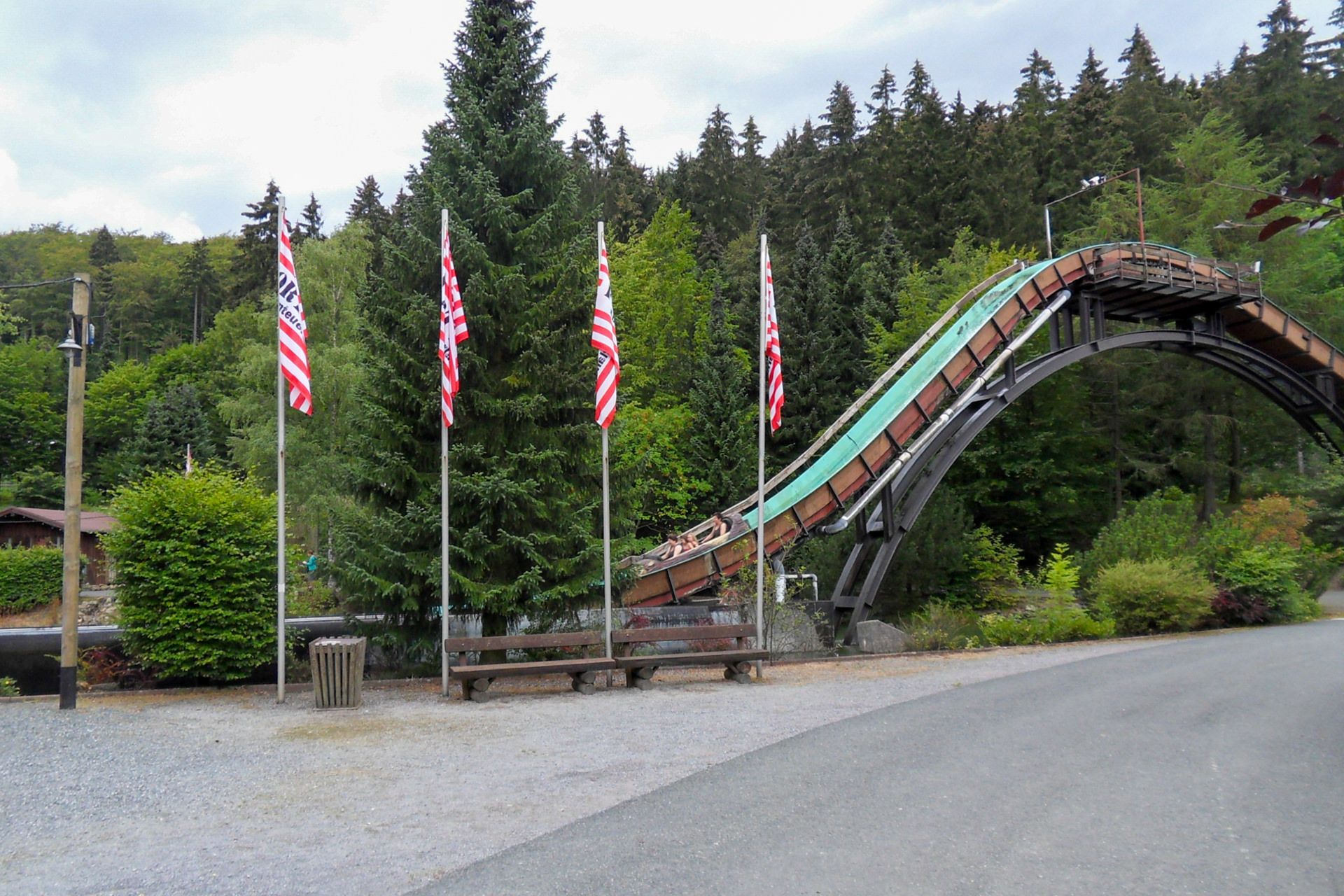 One of the first of its kind 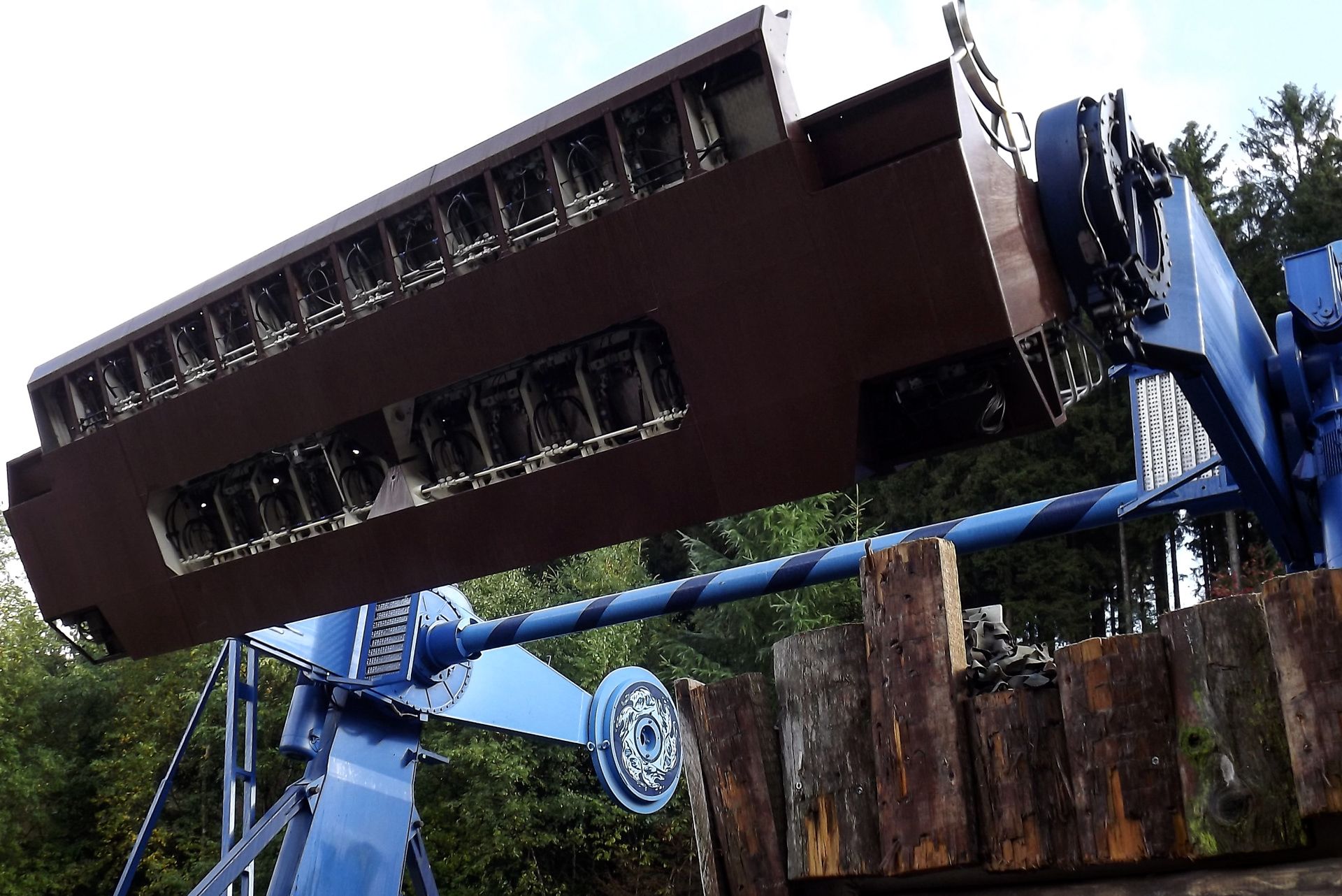 I didn’t intend to drive back to the Fort Fun Abenteuerland via Hesse so soon, but the revised roller coaster Speed Snake was a good reason to do so. In order to avoid the expensive 25€ ride photo this time, I drove through the village Niederwetter out of protest always well below the posted speed limit; to be honest, one doesn’t deserve anything other than artificially caused traffic jams, thanks to the unclear signposting, alleged traffic safety or not. Shortly after surviving the Hessian part of the Sauerland, one passes through the much more beautiful North Rhine-Westphalia, passing a single speed camera at a place where it actually makes sense. Funnily enough, the state on its border with Hesse makes fun of its neighbour, because you could be flashed.

Arrived at the park, Sheriff Fuzzy showed us the way to the parking lot and welcomed us shortly after with even more flattering sayings in the park. For some people a little bit annoying, but for most of us quite entertaining. Later in the day he draws the visitors into the shows and performs in them, where he gained cult status some years ago.

Beside him, the new Mascot and the unfortunately still closed Funny Fux Bau there is another novelty this year, as the Vekoma Whirlwind Speed Snake has undergone a retracking. It would be wrong to say that the ride would have needed such a treatment, after all it still performed quite well, but it makes sense if you want to use the ride for the next 20 years. The money used for this could have been saved outside of the unfinished repainting of the ride. The ride has definitely changed for the worse, what used to go round and round is now driving strangely angular. This gives a oddly interesting and exciting ride in the corkscrews, but during the course of the ride you get to know the restraints, although quite gently.

Although the visit at Fort Fun was only a rather trivial meeting compared to the previous day at the Holiday Park, it saved me a few hours of travel time back to Hamburg. The novelties of the Fort Fun Abenteuerland are at least pointing quite consistently in the right direction and so a test of the Funny Fux Bau would have been certainly interesting.

What is your opinion about the roller coaster Speed Snake? Just write it in the comment field below the report or in our social media channels:

It was crazy to go back home one day after driving 500km to the south, only to drift off towards the Netherlands. On the other hand, the trip to the Fort Fun Abenteuerland in Sauerland to test the new attractions, including the Top Spin Yukan Raft, was a necessary part of our plan, which no minefield in Hesse could stop us from doing. Our trip was unforeseenly made more expensive by the community of Wetter and their hilarious and unfortunately very modern photo equipment by 25€. Therefore, it is no wonder that the more beautiful part of the Sauerland makes fun of the neighboring Hesse by a mercilessly oversized number of speed cameras, namely a single one (even with a warning when entering the state).

Arrived at the cash desk of the Fort Fun Abenteurland we first got ourselves the annual passes which are very important for us to mercilessly and honestly raid the service station. On the question if we are only here for the vouchers we got the tip that you don’t even have to come to Fort Fun, after all the annual tickets including the vouchers can be sent by mail. A great offer for the coming years, of course, but on the other hand, the park under the guidance of the Companie des Alpes is definitely worth a visit.

Tour of the park

At the time of the visit, not too many people saw this, so that the rush was very limited and apart from a company meeting, hardly any other guests got lost in the foggy abysses of the park. For this reason Jan, Julian and I dared to take a ride on the Wild Eagle, which is an upcharge attraction for only 1€ p.p. and really doesn’t matter to anyone. The Wild Eagle is a suspended ride. Lying on your stomach, it is pulled backwards up the mountain to reach its maximum flying height about halfway down the Alpine Coaster Trapper Slider. Shortly after that it goes flying downhill, whereby the actual ride pleasure is very limited in order to be braked very early. All in all, the whole thing was an action you should do once if there is a reasonable waiting time at the ride, but you can also do without it.

So early in the morning there was a wonderful atmosphere at the Vekoma roller coaster Speed Snake. The undeniable photogenicity of the Arrow’s rail profile and the all around existing infrastructure made for countless photos, even though most of them could be taken without a train. In order to make this possible for Jan and Julian, I decided to take a ride in the second car, which strangely enough just hopped over the rail, while all the other cars offered a smooth and rock solid ride.

Further down in the valley and past the still closed Marienkäferbahn (ladybird coaster), which was still closed due to the cold, and the luckily removed children’s parking area, we made our way to the Rocky Mountain Rallye, the newly designed Monza track. Although the changes were really only made on a small scale, the ride now appears coherent in the overall concept of the park.

The second innovation this year, Yukan Raft, is similarly coherent. As with the Indoor Round Up Dark Raver, Fort Fun has proven that they have a knack for designing used rides appropriately and making them interesting. The fact that the ride on the Yukan Raft turns out to be outstanding is something you can be very happy about with a permanently installed Top Spins, because such an exciting ride as well as an intensive ride has rarely been offered by the showman Plaenert, who previously owned this ride, although he could be taken as a benchmark for a good ride.

On the top level of the park, the last novelty since my last visit is revealed to the visitors. This is the newly designed and highly praised ghost train Secret Stage of Horror, which did not really surprise us. Where the ride was a very bizarre but good ghost train before, it is now a good ghost train with really good ideas, but somehow nothing more. The video projections are all good, the house in general is really well darkened, but during the ride nothing happens and the rest of the ride is not enough to really get you into the story line.

Although I considered Fort Fun a good park on my last visit, this visit helped me to see it as one of the better parks in Germany. The Companie des Alpes is doing a lot of work here, although they wanted to sell the park. The existing territory leaves room for more and so one can only hope that in the future more people will make their way to Fort Fun Abenteuerland to make room for further investments.

What is your opinion about the Secret Stage of Horror ghost train and Yukan Raft at Fort Fun Abenteuerland? Just write it in the comment field below the report or in our social media channels: