Thorpe Park in Staines, Surrey near the English capital is one of the largest theme parks in the country. Founded in 1979, the theme park is currently operated by the Merlin Entertainments Group. On the Island like no other visitors can expect an extraordinary number of thrill-packed roller coasters and attractions. Its festival ambience is aimed primarily at a younger audience or families with older children, thus setting it apart from the nearby amusement parks Chessington World of Adventures and Legoland Windsor. Fun Fact #1: Tussauds composed an elaborate soundtrack for the Island like no other, which was adapted to the course of the day. Unfortunately this was replaced by a new soundtrack from IMAscore. 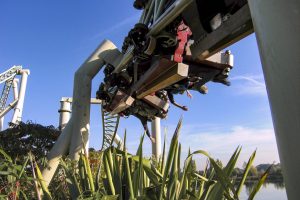 The reinvention of a classic 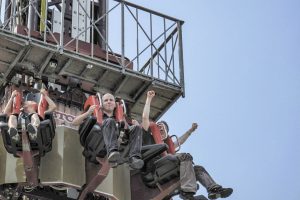 A blast of a drop tower The family coaster of Thorpe Park The ride through the volcano 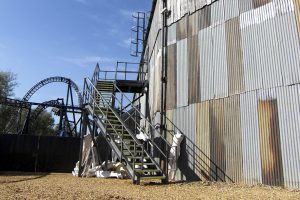 The backwards ride was insane, but nowadays it only runs forwards 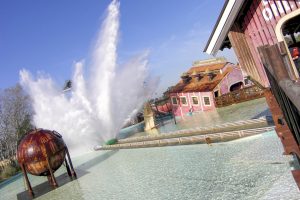 The most beautiful Shoot the Chute The Walking Dead: The Ride One of the best rides ever created

The changes of the past five years

What has Merlin made of the Island like no other in the last five years? The last two rows of the Swarm roller coaster are going forward again, the Disco roller coaster X has been redesigned into The Walking Dead – The Ride, parts of Amity Cove have fallen victim to the birds of Angry Birds, the Logger’s Leap log flume is rotting away, as is the Slammer Sky Swat – which is now officially awaiting its demolition – and Saw: Alive is at least operated from time to time (the same goes for the relatively new Maze I’m a Celebrity…Get Me Out of Here!). In addition, there are a lot of closing days during the season and also the distinctive soundtrack of the island was exchanged.

There are many reasons for many things, but there are some things I don’t understand completely. Officially, Merlin have now taken a much more family-oriented course, which means they’ve moved away from the thrill-ride fetishists and the associated grubby image (# Hard Gaan) – strangely enough, they’ve been selling tickets to students ever since, thus attracting the preferred former clientele in much larger crowds. Can be done, but by now I’m too old for this shit. Just like I can’t approve of employees at the entrance of an attraction encouraging you to buy Fast Passes, even though the corresponding queue is almost non-existent.

But there are also rays of hope. Derren Brown’s Ghost Train is such a one. The reinvention of the classic ghost train is, in terms of storytelling, a huge hit. It’s just a shame that all visitors of the park are aware of this, so long waiting times are often a common issue. But that shouldn’t stop you from queuing here, after all the mixture of ride, Maze and VR experience is unique and about as scary as a Japanese horror movie in a 360° cinema.

The reinvention of the Ghost Train

After you have stood your legs in the queue, Derren Brown personally welcomes you in a short pre-show. It is thematically about the reinvention of the ghost train and why we love to get spooked. This all sounds promising and so we leave the showroom expectantly and climb a short staircase. Here we are held back for a short time, but it doesn’t take long until we enter the hall with the ghost train. Hanging from the ceiling, an old Victorian carriage appears, but its interior resembles that of the London Underground. Now, the VR-glasses have to be put on and when both trains are ready, the trip in the ghost train can start.

Actually, there are three trains, but only two of them have passengers at this stage. Thus we leave the station and ride a little bit with the tube. A man with a dog gets on and tells us a story that the scientists of the BGR in Hannover may not be able to agree with. Fracking is evil and something went bloody wrong. It doesn’t take long and a contaminated person tries to gain access to our compartment. It gets creepy and thanks to the VR-glasses we can’t help but always look directly in the direction of the action. In the meantime it is getting dark and a staff member has to stroke the passengers’ knees once through the rows. There is an accident and we have to leave the train as soon as possible.

By means of merlinary drills we are sent through a short and very nicely designed maze. This is less creepy, but somehow we have to get to the second platform of this dead-end station, where another subway is already waiting for us. But this time we are not the only passengers and each of the others has VR glasses on. The train starts to move, but this time the true story is revealed to the visitors; it’s not the fracking per se that contaminated the people, no demons did. Individually, they now get rid of passenger after passenger, before we turn to our fate in a magnificently staged transfer track scene and fall into the abyss. 3,2,1, we are back again.

So that was the reinvention of the classic ghost train and boy, that was good. The VR staging works, after all the graphics are high-resolution and don’t need real-time rendering. You just feel like you’re in a movie and not in a computer game of the early 90s. As already mentioned in the beginning, the ride on Derren Brown’s Ghost Train is not really scary and more of a suspense horror. However, this is what makes it good, which is why the ride, like any other proper ghost train, is very entertaining.

The Walking Dead – The Ride

Right next to Derren Brown’s Ghost Train is the entrance to the roller coaster The Walking Dead – The Ride, formerly known as X and X:\ No Way Out. Designed around the series The Walking Dead, the ride now shows a clear thematic reference. Zombies are simply better to convey than a computer virus or a discotheque. Basically, the same naked queue inside the building awaits you, but instead of fabulous light effects and a great music you only find desolate brown walls. The ride itself is partly nicely arranged and for fans of the series it’s definitely a great deal. At least I couldn’t do anything with it. On the equally long way back you only find naked brown walls once more, which is why you’re just glad to be back in the open air again.

Well, that was hardly worth it. You can implement well-known licenses, but then you have to exploit their potential. In fact, I wish nothing else than the lively computer virus-infested reverse roller coaster back. At least it was consistently weird and yet absolutely fun. The conversion to X was quite cool and quite optimal for the younger audience, but now as Walking Dead – The Ride it’s not even worth a ride in between. That’s a pity and for me a symbol for the developments of the last years.

Thorpe Park, you used to be cooler. But actually, that’s true for the entire Merlin Group. Something’s gone terribly wrong with you. Why do you want to get rid of the Tussauds image so badly lately? The island used to be coherent, now there’s only an IMAscore mash left, which isn’t good for some attractions. In addition, on both days of my visit many attractions were not running at all or only with problems. Well, breakdowns have always been the order of the day at Thorpe Park, but at least one can try to keep this kind of thing within the limits. Actually, the only thing missing now is the failure of a bigger roller coaster for a period of 2 years (Colossos at Heide Park) and the typical image of the Merlin Group would be perfect here, too.

What is your opinion about Derren Brown’s Ghost Train and The Walking Dead – The Ride at Thorpe Park?  Just write it in the comment field below the report or visit our social media channels:

As the month of May is not one of the busiest months for English amusement parks, Merlin Entertainments has launched a very nice promotion for Annual Pass holders, where they can take their friends to the group’s four amusement parks in England for £15. Compared to the 50% discount that already exists, this offer is much more worthwhile and so my English friend and fellow student Connor went back to Staines after some time.

The park was relatively empty for a Sunday of a Bank Holiday Weekend in the sunniest weather, but occasionally there were longer queues, for example at the beginning of the day 120 minutes were spent at Colossus, while at Saw the Ride one could walk up to the station. Also at Stealth and The Swarm there was a longer queue, but not necessarily with the reverse option of that.

While the right side of the Swarm can generally be quietly considered the better one, it is the left side that scores much more when riding backwards. While the forward ride through a single Near-Miss could convince since this year, you don’t notice anything of it when going backwards, but you are surprised by almost every element, which was mainly unexpected on the last roll. It’s a funny feeling, which keeps me laughing all ride long.

The second novelty this year is the redesigned roller coaster X:\ No Way Out, which now operates under the simple name X. After entering the redesigned queue, the now quite nice and atmospheric queue goes towards the station, where you enter the new trains, but leave the station in a forward motion. In the hall you can expect good lighting effects and a great soundtrack. The forward and backward passages on the lifts don’t exist anymore and so you race down the track until the last two block sections. There you can wait a little bit longer, which isn’t that annoying with the light effects, moreover this break offers a good view of the track.

Merlin Entertainments and Thorpe Park did nothing wrong with the redesign of X, because last year’s X:\ No Way Out was really not an interesting ride anymore. The music, the ride and the lighting effects are quite nice, even though you missed the fact that the trains are running in reverse.

What is your opinion about X at Thorpe Park?  Just write it in the comment field below the report or visit our social media channels: