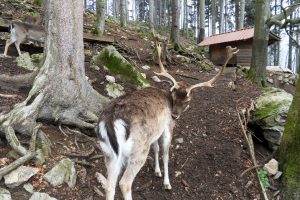 Steinwasen Park located on the edge of the community of Oberried near Freiburg in Baden-Württemberg is a medium-sized, family-run zoo and leisure park. With its hillside game park and three toboggan runs, as well as the rides that wind their way through the basement of the entrance building, the park offers an extremely enjoyable mix of animal park and family-friendly rides. 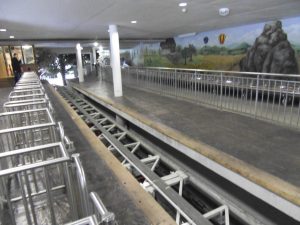 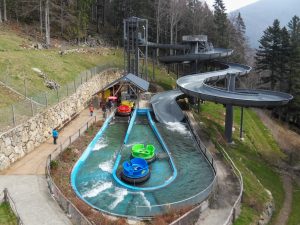 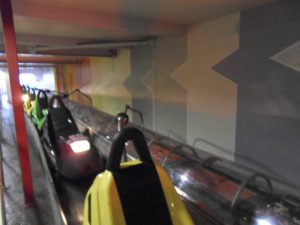 The bobsleigh track through space

Since 1974, Steinwasen Park has been attracting its guests with some wild animals to the vicinity of the village of Oberried in the Black Forest. With two parallel running summer toboggan runs they offered relatively early another attraction for their park guests. After the new entrance building was constructed, a Mack Powered Coaster and a Wiegand bobkart track were stationed in the basement shortly afterwards. Since the construction of the spinning raft ride by ABC Rides in 2008 at the latest, the park has also become better known nationwide.

After you have paid the price for the wristband you will first of all be confronted with the local patriotism of the park. Those who haven’t noticed it before know that they are in the Black Forest and that the whole thing is designed so lovingly and in such detail that one might think they are not in a small park.  Besides a dark ride and several small cinemas, there is also the park gastronomy on this floor.

Via a staircase you can make your way up to the ice world, which once again was too original and professional for such a park. Unfortunately, the entrance to the two attractions that drive through the ice world is at a completely different place in the park. So instead of on our way to the attractions we found ourselves in one of the helices of the Powered Coaster.

In the outer area of Steinwasen Park there are wildlife enclosures and the above mentioned spinning raft ride River Splash. To reach it you have to leave behind an unconventional path with a helix and numerous serpentines. In order to give the onlookers an impression of the ride, there is a platform on the first helix of the water ride. The highlight of the ride is surely the impressive vertical lift, the following curves manage to make the boat turn well, but the purpose of a rafting ride is, as always, not reached with this type of attraction, as one does not get wet.

When you finally reach the entrance to the attractions in the basement of the main building you have to choose between the Space Runner or the Gletscherblitz. While the Space Runner bobsled run offers a nice, fast, if somewhat jerky ride, the Powered Coaster Gletscherblitz scores with an interesting track and great effects.

The cable car takes you up to the entrance of the luges, which features a rather strange sled. As it had no real stiffness when folded out, the ride was a bit worrying, even though this was most likely an unfounded feeling, but it prevented me from going full throttle. Should there be bad weather, there is the possibility to arrive dry on the roofed side of the double layout.

If you are afraid of heights, there is the possibility to walk to the starting point of the luge through the game park, but since the way down is easier, it is recommended to take the chair lift and to walk down the zoo from top to bottom. The enclosures are quite large, although it may take some time to discover the animals due to the mountainous terrain. At about half way there is the possibility to walk on the longest adventure bridge in the world and enjoy the view.

What is your opinion about Steinwasen Park wildlife and amusement park?  Just write it in the comment field below the report or visit our social media channels: