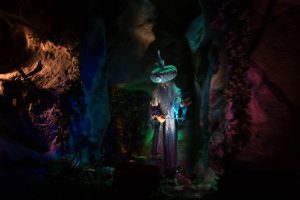 Efteling in Kaatsheuvel, Noord-Brabant ist the biggest and most visited theme park in the Netherlands. The amusement park originated as a fairytale forest in 1952, but originally as a nature park in the 1930s, where a total of 10 fairytales were told. Under the direction of the artist Anton Pieck, after whom the central square with a few smaller carousels in the Marerijk area is named, the fairytale forest grew steadily and – unlike most other theme parks – never lost its importance. Beside the talking tree Sprookjesboom, which tells the children the fairy tales of Sprookjesbos in Dutch, you will find some bizarre and very interesting things, such as the Indian water lilies or the flying fakir. Especially with smaller children you can easily spend most of your time in the park in this area.

The park is home to a large number of very impressive and highly immersive dark rides. It also houses a fine selection of roller coasters for the whole family. The park’s slogan “World of Wonders” quickly comes to reality, when you start to discover all the details presented in the park. Especially the talking rubbish bins Holle Bolle Gijs will stick in your memories, as they always did for many generations before.

Fun Fact #1: The roller coaster Python was once the largest roller coaster in Europe and one of the first coasters ever build to feature four inversions. At one point in the past, Efteling planned to even enlarge the roller coaster by adding many exiting new ride sections to the coaster. Unfortunately, these plans were never realised. The roller coaster itself never lost anything of its importance and the track was recently being replaced. 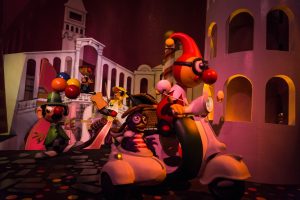 Fun Fact #2: Nearly all the music, which you will encounter during your day, is written for the park. The evening show Aquanura is a great way to celebrate these tunes and relive all your adventures during the day.

Fun Fact #3: Efteling is open all year round and features some of the best theme park events out there. With the Efteling Summer Festival or Winter Efteling, every theme park enthusiast will be absolutely overwhelmed by the offering of the park. Pride comes before a fall A fun trip around the world A fast-paced race on the wooden roller coaster The water roller coaster with the cursed ship Every now and then, a roller coaster that you have grown fond of has to say goodbye. After 34 years of operation, this happened to the roller coaster Bob – one of the rare Swiss Bob coasters of the manufacturer Intamin. The end of the coaster was very predictable, after all it was one of the few roller coasters allowed for smaller children – but due to its low capacity it could not compensate for this, so there was always a longer queue. Since Efteling also became more and more popular, something new was needed. Probably the most family-friendly roller coaster on the market for decades has been the Powered Coaster from Mack Rides. If you double the number of trains, you also get a very high capacity, which leads to additional fun by using two lanes. The result was the roller coaster duo Max + Moritz.

Typical for the theme park Efteling, this roller coaster can also show a very affectionate design. Here, the two rascals from the well-known story by Wilhelm Busch try out their self-built ride gear, which leads to some chaos.

The ride on Max

The ride with Max (the blue lane) begins with a small hill on which we gain some momentum. Close to the ground, we now drive through a few alternating right and left turns, and at the same time we gain a little height in the final right turn. Now we cross Moritz’s track once and spiral in a tight helix towards the ground. In the process we meet Moritz. The train now leads us with momentum through a right turn and a turn to the left before we gain height in a helix. A short turn to the left and a tight right turn later we enter the station building. Here we meet Moritz and start the second lap.

The ride on Moritz

Moritz (on the green lane), meanwhile, is well on his way and so we immediately enter a wide left turn. In two swerves we approach the ground gradually, whereupon we immediately dissipate our energy again in an outward spiral. Above Max’s lane we now take a left turn. Here we meet our brother. After a ground-level turn to the right, we gain altitude within a tight helix once again. Another right turn and a left turn follow before we approach the station on a longer straight and slowly lose speed.

Max + Moritz are clearly excellent roller coasters for smaller children. In this respect, there is absolutely nothing to criticise. However, I personally find it a great pity that you only really meet in two places during the course of the ride. If both tracks went in the same direction, the roller coaster would definitely be a bit more exciting. I also don’t consider either roller coaster to be a dignified replacement for the old bobsled ride, but only a functional one. Admittedly, the colourful ride with its great design and terrific soundtrack fits much better into Efteling than Bob ever did; however, my conclusion is clear: children will have a lot of fun on both rides, adults might ride them once or twice.

What do you think about the new roller coasters Max + Moritz?  Just write it in the comment field below the report or visit our social media channels:

A visit to Winter Efteling

A visit to the Dutch theme park Efteling is always a good idea, especially in winter. Although you have to live without the water rides Piraña and Vliegende Hollander, the Winter Efteling is one of the best winter events in an European theme park. No wonder that I have visited the park by now more often in winter than in summer. With Symbolica and the other dark rides, Efteling is a rather special place in winter.

As the airfares from England to Hamburg were a bit too expensive for me for the Christmas season, I found a trip to the amusement park a practical way to get home. At that time there were no offers, so I decided to buy a Ticket Luxe. This includes the entrance fee, a short ERT on selected rides (which is only worthwhile, when being at the park way before its opening), 25% discount on souvenirs, a snack, coffee & cake, as well as a dinner in one of the park’s service restaurants and the parking ticket. The latter alone costs 10€, which is why the surcharge on the normal ticket price only costs a total of 20€ for a person travelling alone. This is quite a fair deal; for each additional person in the same car, however, the surcharge is 30€, as they do not need the parking ticket – especially for families with children, this option might not be a good idea. It is an all-round carefree package, very similar to the all-inclusive package of the Danish amusement park Tivoli Gardens, except that the amusement park here is much bigger and you can easily lose yourself in the absence of planning.

This has happened to me at least; such a ticket is kind of stressful. After spending my time with the park’s attractions, I was the last visitor in the Panorama restaurant nearby Vogel Rok. After its closure, I even got served an espresso when all the other guests had already left the restaurant. That was very exemplary – and I was very happy to be able to redeem the last voucher of the Ticket Luxe. The food offered here was good, I had salmon with a glass of white wine and the already mentioned espresso – at the end, the ticket option was quite useful. For this reason, I recommend this ticket option to anyone who can manage comfortably with all-round carefree packages and knows in advance that they are going to eat in the park at regular intervals.

In addition to this all-inclusive premiere, another novelty had to be tested: Symbolica. The journey through the Palace of Fantasy is Efteling’s newest dark ride, where you can explore three different paths: the Heroes Tour, the Treasure Tour and the Music Tour. The special feature of Symbolica is the ride system used, as it does not need rails and the gondolas seem to move randomly along the route.

The general ride sequence of Symbolica is the same for all three tours up to a certain point. On our way to the audience with King Pardulfus we are guided through numerous beautifully designed halls and corridors by the court magician Pardoes. The scene in the Botanicum is especially memorable, where a whale suddenly appears on the spell of Pardoes, the surrounding glass roof gets a jump and water penetrates the castle. This moment is Efteling in perfection and thus you can’t get out of your amazement. In the following corridor you can shake your car back and forth – as the car is also fitted with touch panels and invites visitors to interact.

All three gondolas then disappear into a small room where, in addition to the obligatory ride photo, a kind of mini-game awaits the passengers in the front row. The back row has to be a little patient, as this section unfortunately takes some time. Thereafter, each gondola is released into the fantasy depot, whereupon all gondolas enter a special room according to their tour. Especially the hero tour is recommended as it allows to fight against each other with two knight animatronics or to leave it as it is; depending on which decision you choose in this scene or depending on which decision the first row takes in this scene, the grand finale of Symbolica changes accordingly. Arriving in the ballroom you can watch a very happy party or chaos at work. Thanks to the different ends (only two of them are mentioned here, which I attended myself) this ride has a lot of potential for repetitions, however, you need a few rides before you finally understand the influence of the Symbolica’s touch screens. The room with the mirror unfortunately looks uninspired, the rest is just great; although the ride would have been even better if the interaction had been solved differently. Unfortunately, this leaves a bland aftertaste that doesn’t really do justice to this dark ride.

I spent the rest of the day hoping that the Bob roller coaster would eventually open – which unfortunately didn’t happen – and with numerous rides on the roller coasters and dark rides of the theme park. I was also able to do one last lap on the original Python roller coaster before it was rebuilt by replacing the rails and supports. In Efteling nothing disappears so quickly, especially not the family fun.

What do you think about the dark ride Symbolica?  Just write it in the comment field below the report or visit our social media channels: