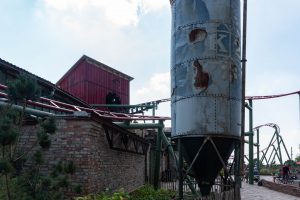 Karls Erlebnis-Dorf Elstal in Elstal, Brandenburg nearby Berlin is one of the farm shop theme parks by the Dahl family simply knows as Karls. Besides the large farm shop and manufactures, you will find restaurants, large playgrounds and amusement rides.

Fun Fact: The park is the first one of the family to feature a full-size roller coaster.

We normally don’t speak about landlords, but we have to make an exception for the Dahl family, as they started to run small amusement parks along the German coast line of the Baltic Sea. As they are also prominently represented in many areas of Brandenburg, you also have a Karls Erlebnis-Dorf (named after the grandfather Karl Dahl) located nearby Berlin in Elstal.

The Dahl family are farmers specialised on strawberries. Similar to the Staveley family of Lightwater Valley, Robert Dahl searched for ways to attract more and more people onto their property in Rövershagen, as their farm shop was running surprisingly well even after the harvest. Overall, the mixture of farm shop, gastronomy and playground was very well received. With time new ideas were added and at one point, the amusement rides were built by abc rides.

The good cooperation between Karls and the manufacturer then lead into the installation of the roller coaster K2 at Karls Erlebnis-Dorf Elstal. Due to the success of the roller coaster, other rides then were installed at the other Erlebnis-Dorf locations and its just a matter of time till every one of them will be a go to location for amusement park enthusiast, as the location in Elstal certainly is due to its highly immersive experience.

The roller coaster K2 for example takes account for the history of the family and gives it a modern twist. In cooperation with the design team of the Filmpark Babelsberg, Karls created a roller coaster based on potatoes and it’s actually pretty good. The theming is done by perfection, but is the hardware worth the wait?

The ride starts with a descent into the cellar, where some smaller scenes were passed by. Through a small tunnel, in which you can see an underground view of the potato plant itself, we reach the lift hill of the ride. Shortly after we climbing to the top, we plunge down the first drop in a steep right-hand curve. A camelback with a nice pinch of airtime follows directly. After a small inclining curve, we quickly enter a small double-down element. In a left-hand helix and a double-up element we gain some height, before entering a small storehouse on top of the building where the block brake section of the ride is located. The speed if throttled in a relatively rough way, before we drop down once more in a right-hand curve. A large downward helix follows. After a short s-curve manoeuvre and a bend to the left, we reach the final brake of the ride. Hereupon, the train enters a second lift before reaching the exit position of the ride.

K2 is a fantastic roller coaster for families. The ride is fun and offers many exiting ride elements, which makes the roller coaster to stand out of the crowd. The only downfall is the capacity of the ride, which is basically too low for a well visited park like the Erlebnis-Dorf.

Overall, I was very impressed by the concept of the Karls Erlebnis-Dorf Elstal. If you are in Berlin and have some spare time, please visit this park. Just make sure you have enough money with you, as there is a high chance that you will buy a lot of things in their farm shop or have a nice meal in one of their restaurants.

What is your opinion about the small theme park Karls Erlebnis-Dorf Elstal and its roller coaster K2?  Just write it in the comment field below the report or visit our social media channels: