Family Center Salou is a small luna park in the touristy coastal town of Salou near Tarragona.

Highlight of the Luna Park 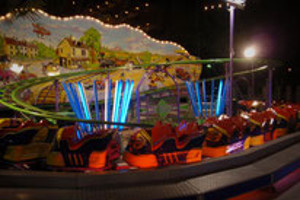 Originally it was planned to meet with Julian, Markus and Martin in the afternoon during the Port Aventura visit. As there was hardly any thought given to exchanging phone numbers in advance, we unfortunately only had one possibility to contact the group, which was made considerably more difficult by the loss of Martin’s phone on the Furios Baco roller coaster. Nevertheless, we finally ran into each other in the late afternoon. There was still enough time for an entertaining conversation with Martin, who then wanted to deal with the guest service and other plans. With Markus and Julian we went for a short walk to the Family Center Salou.

So in the evening we went to Salou, where we visited the small Luna Park. The Muntana Rusa Infantil is a very compact Powered Coaster, whose layout is basically only an 8. Due to larger gauge violations – at least for people outside the target group – and the rather abrupt curve changes in the valley of the ride, the coaster not only creates a constant feeling of fear, but also a little bit of riding fun, which other roller coasters of this size cannot offer.

What is your opinion about the Family Center Salou? Just write it here below the report in the comment field or visit our social media channels: