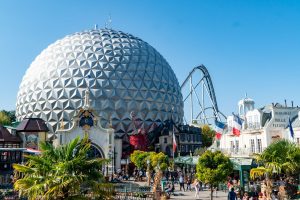 Europa Park in Rust, Baden-Württemberg is the largest and most visited theme park in Germany. The amusement park was built in 1975 as an exhibition area for the rides of Heinrich Mack GmbH & Co. KG – today Mack Rides GmbH & Co. KG, which have their production facilities in nearby Waldkirch near Freiburg. The Mack family, who own the park, has been running the amusement park ever since.

Europa Park is home to a very large number of roller coasters and family-friendly rides, as well as dark rides, all of which have been assigned to European themed countries and thus offer an extremely immersive experience. There is something new to discover at every corner of the amusement park, no matter how small.

Fun Fact #1: The amusement park was originally intended to be run by the showman Otto Tiemann. Since he died shortly before the opening, the Mack family took over the management themselves. Hans-Jürgen Tiemann, Otto Tiemann’s son, however, opened the Heide-Park in Soltau three years later. Even today one can discover many similarities within the two parks. 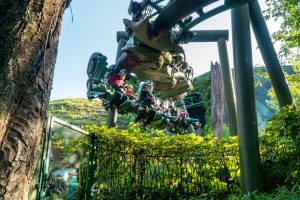 Fun Fact #2: As the track of the popular roller coaster Eurosat has reached the end of its lifetime in 2018, it was replaced. However, as the Eurosat hall is very complex, only a few modules were removed and the track was lifted out bit by bit. To keep the support structure stable, only single rail sections were removed and replaced by the new rail.

Fun Fact #3: Although the first rollercoaster restaurant is located in Harburg Harbour in Hamburg, the Food Loop was the first restaurant of its kind where the pots also go through vertical loops. 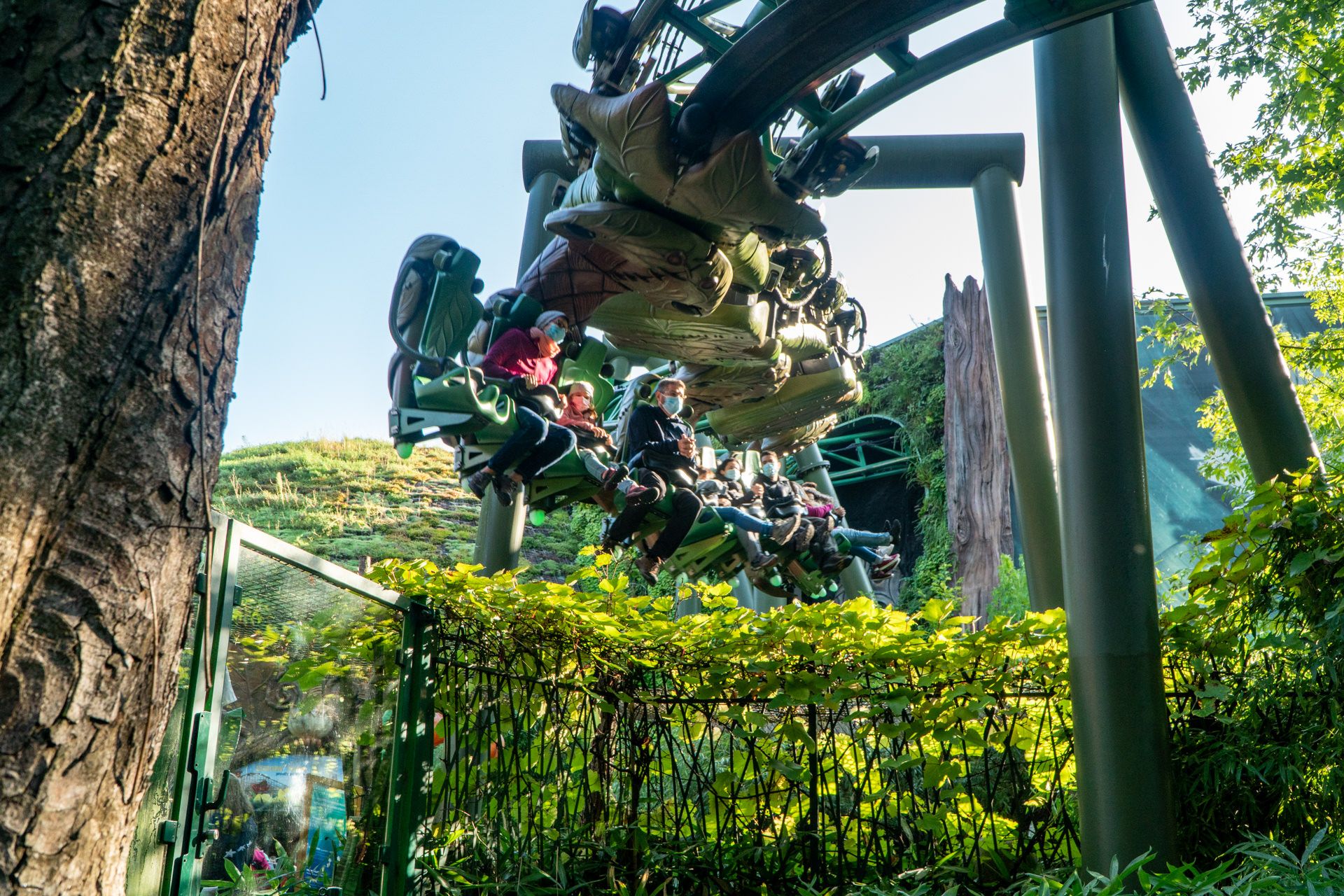 The dark ride coaster based on a French movie 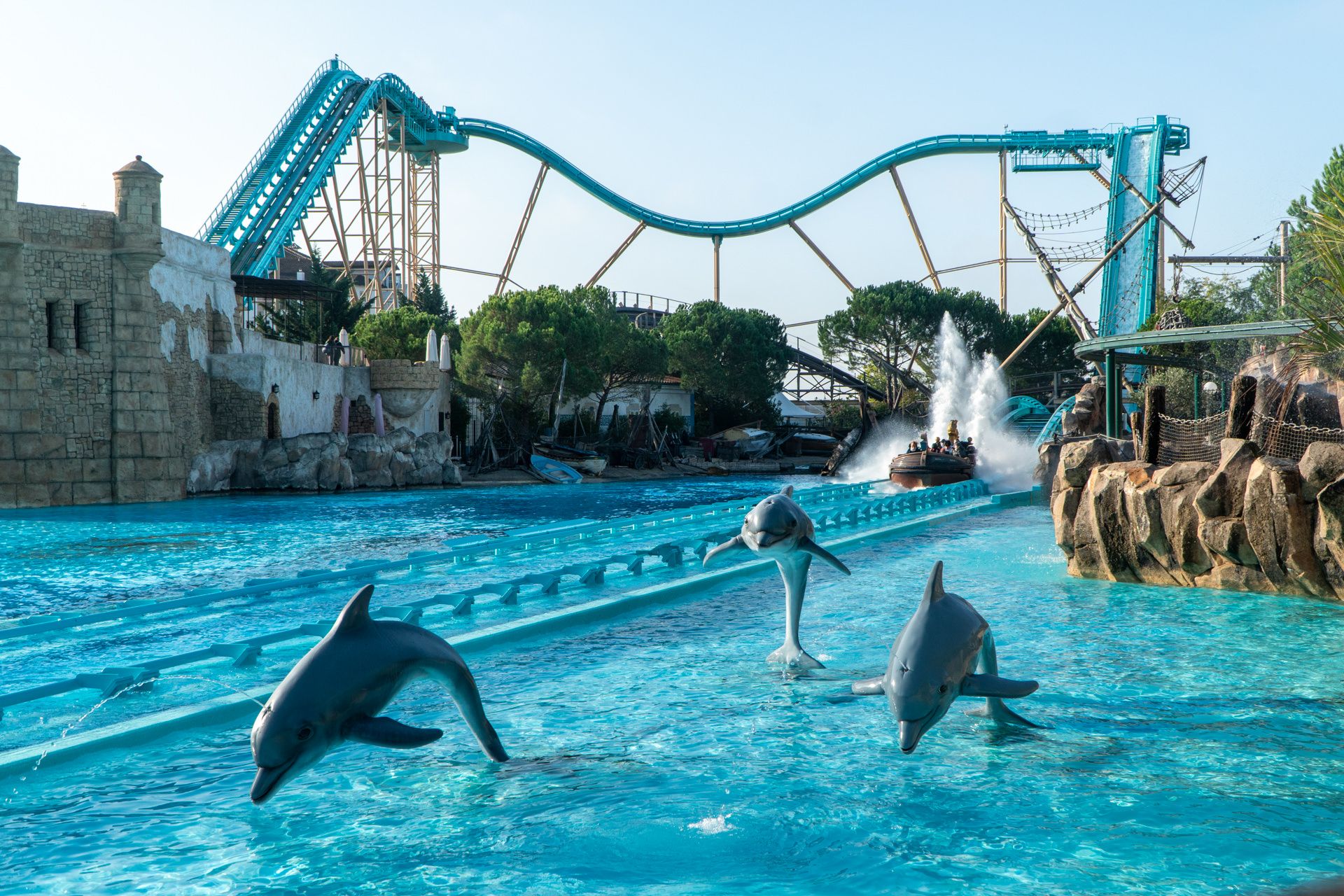 The Shoot the Chute with a hump 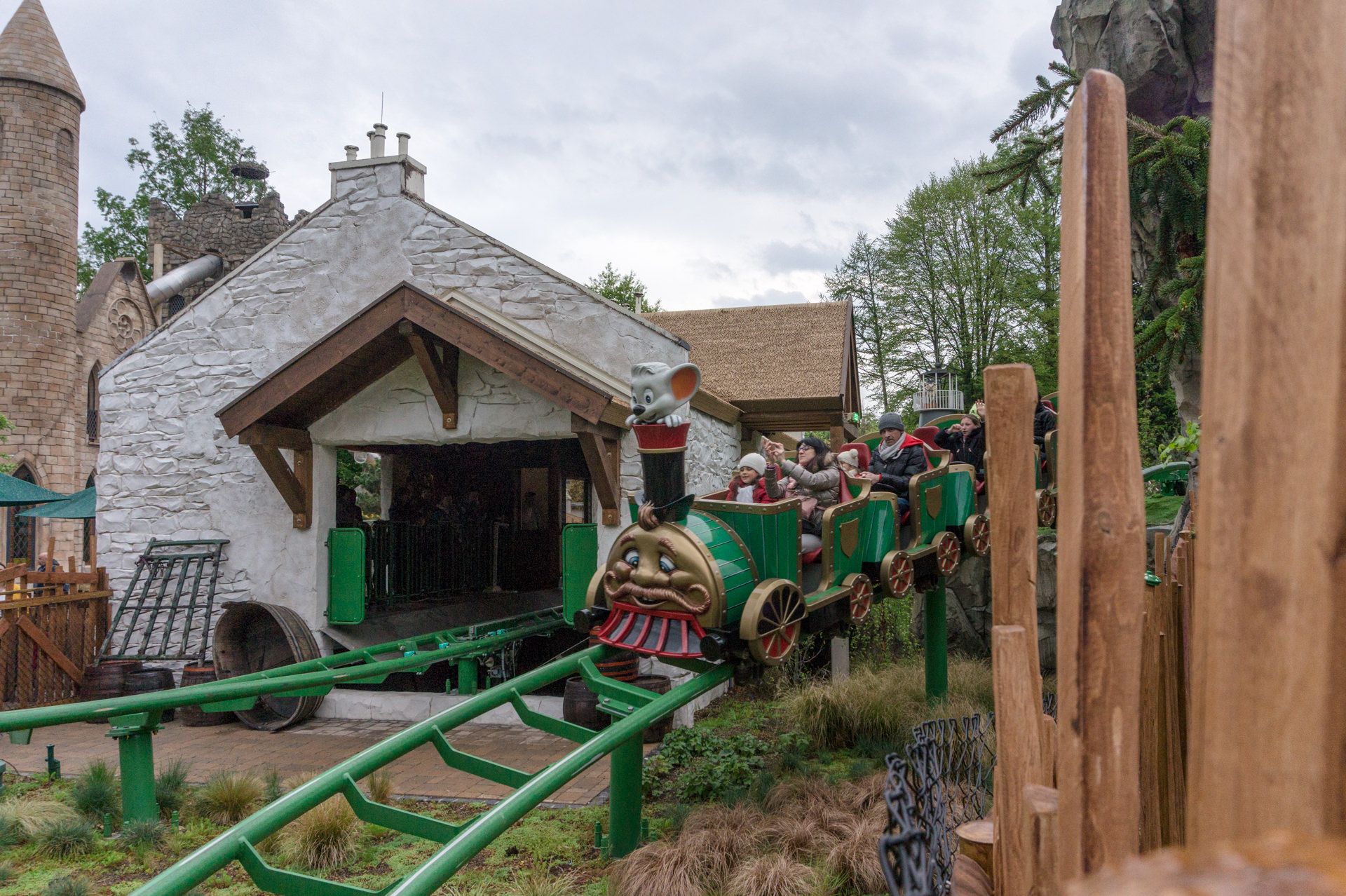 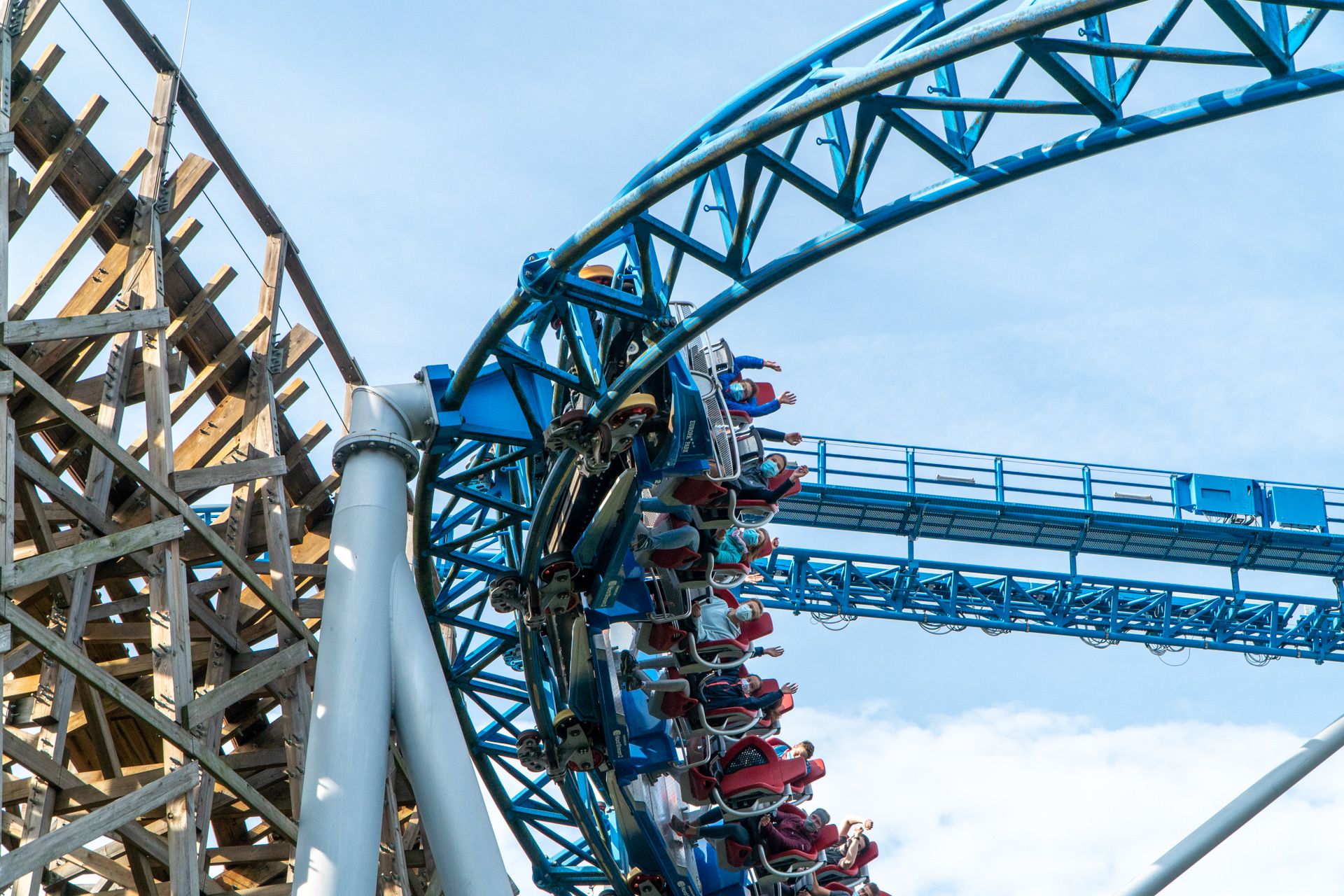 The first of many 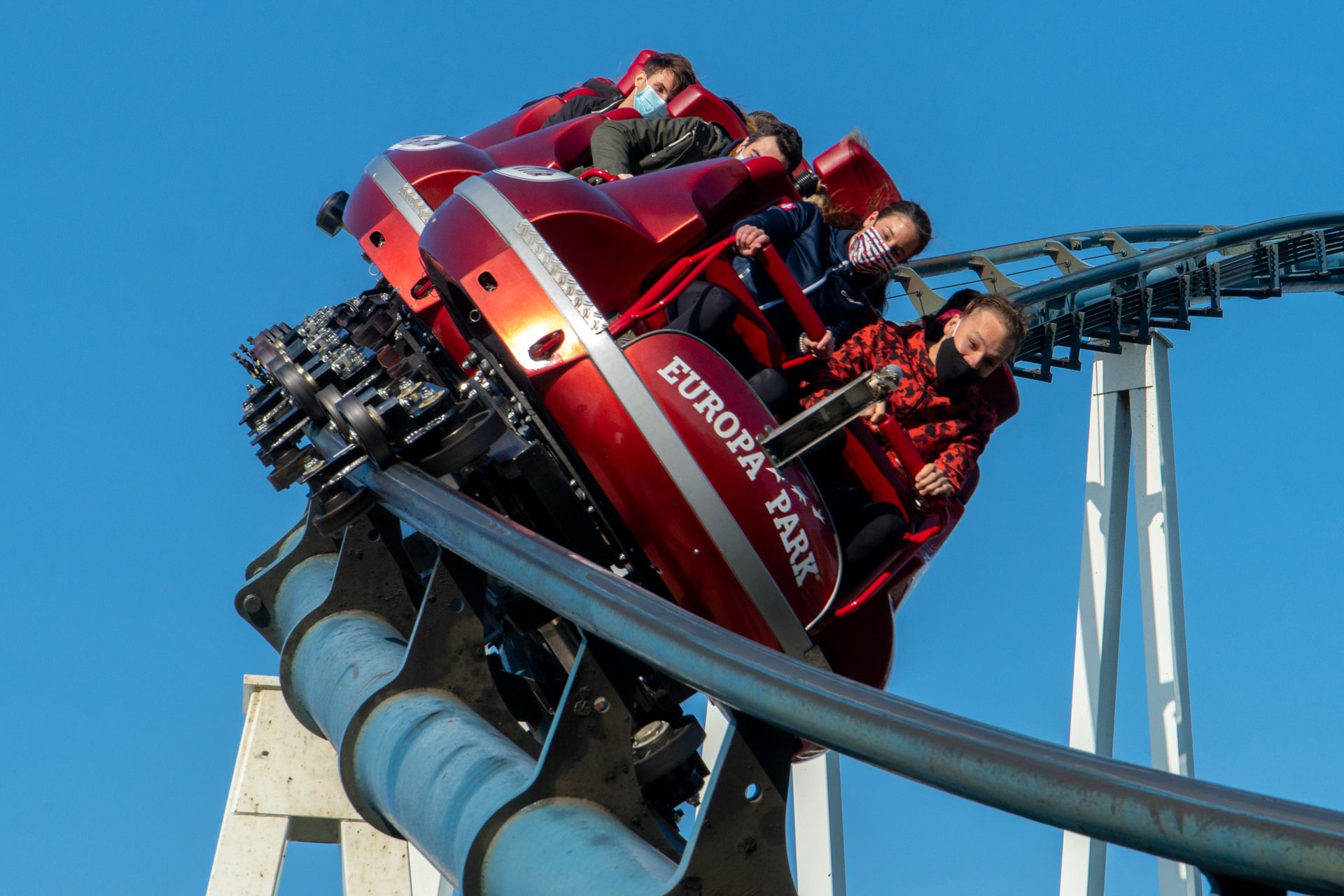 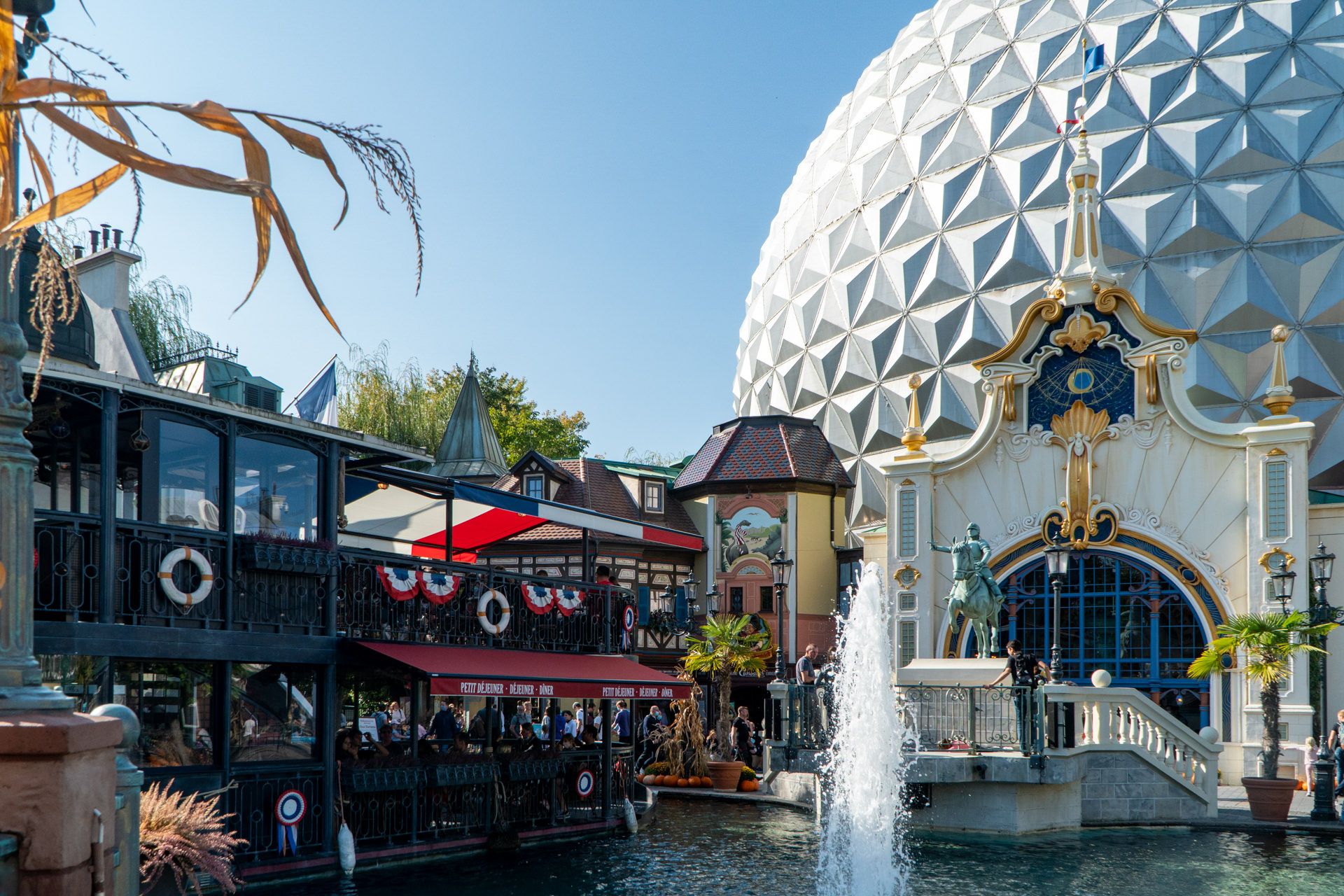 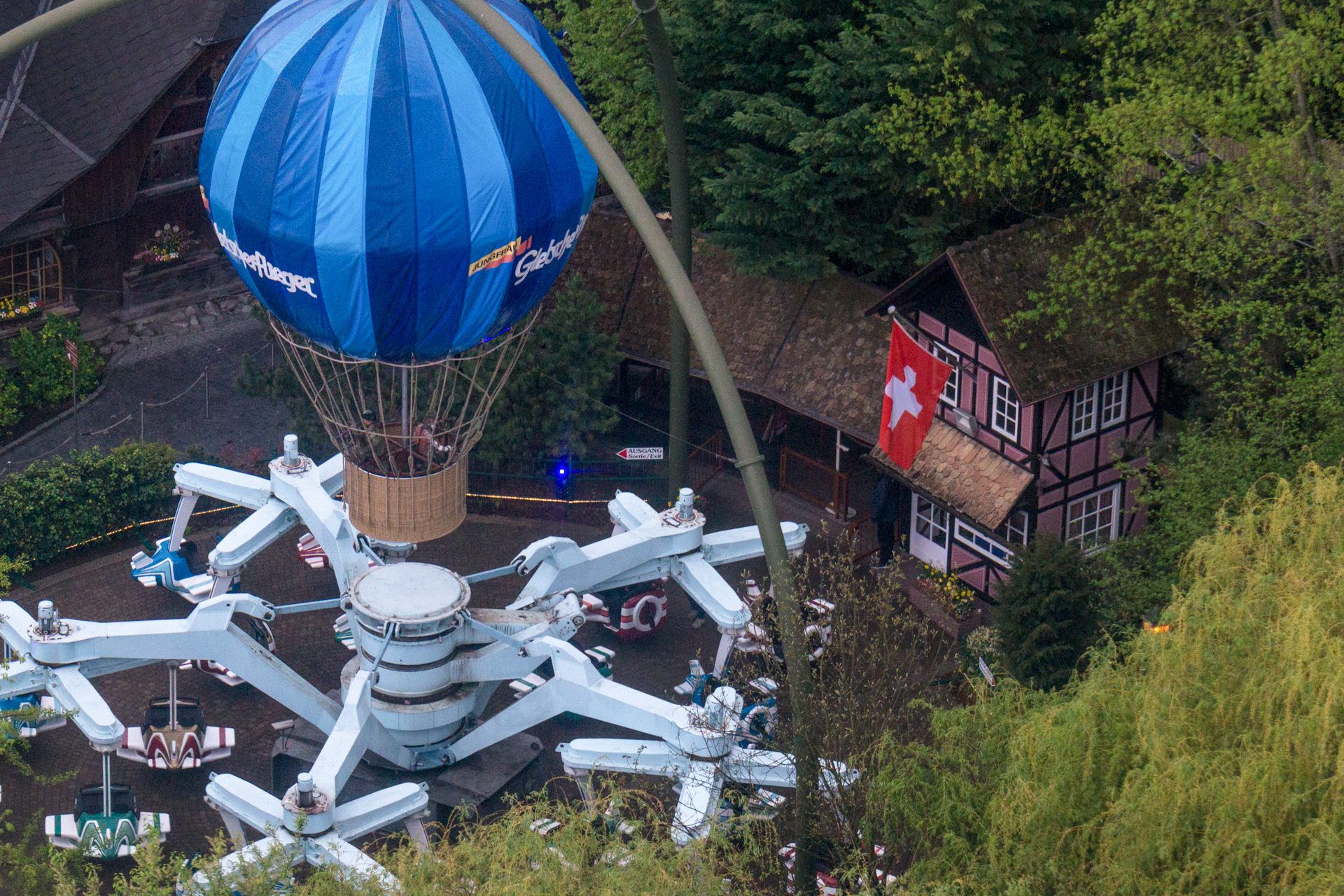 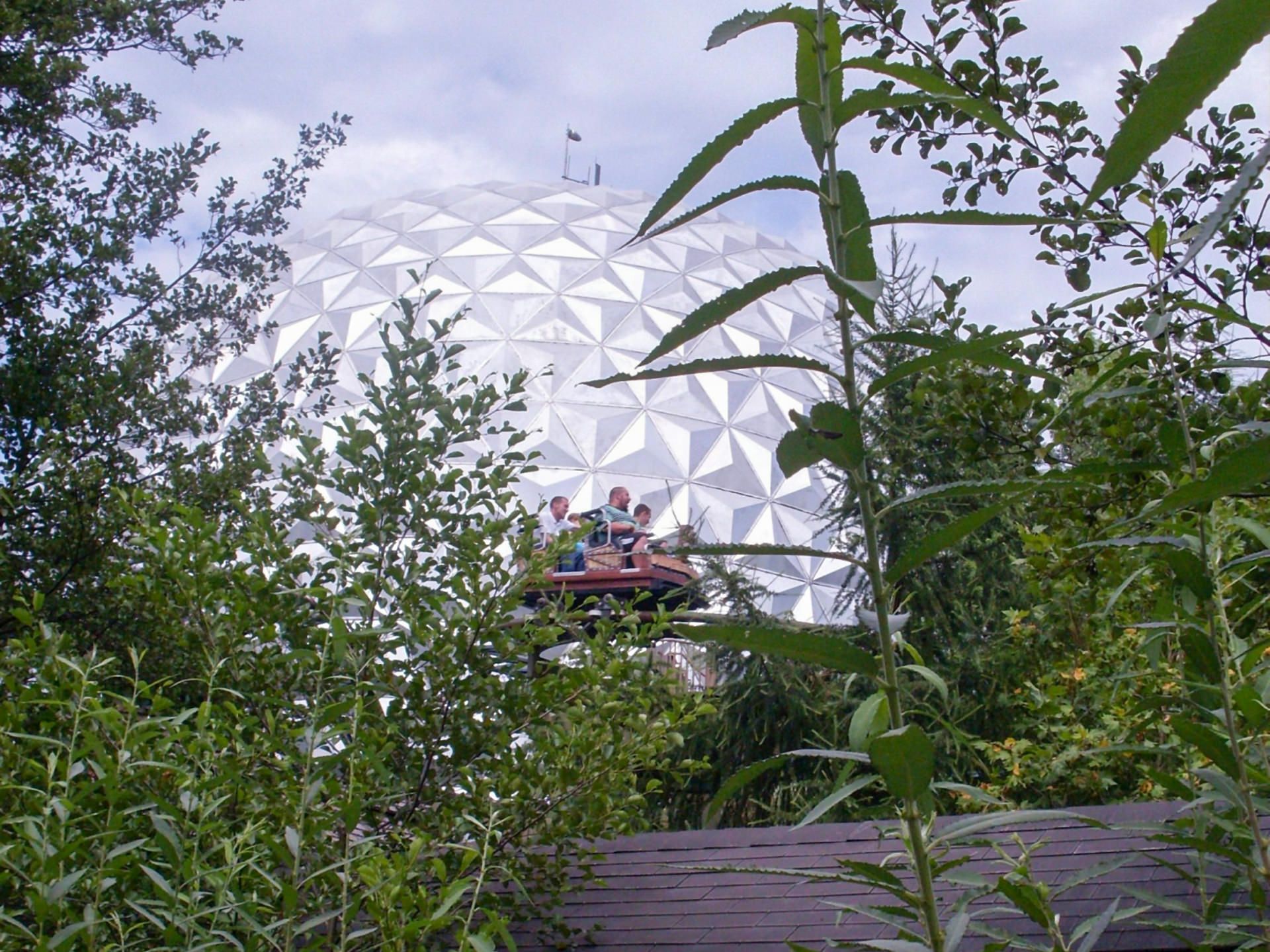 The Wild Mouse you always have to queue for 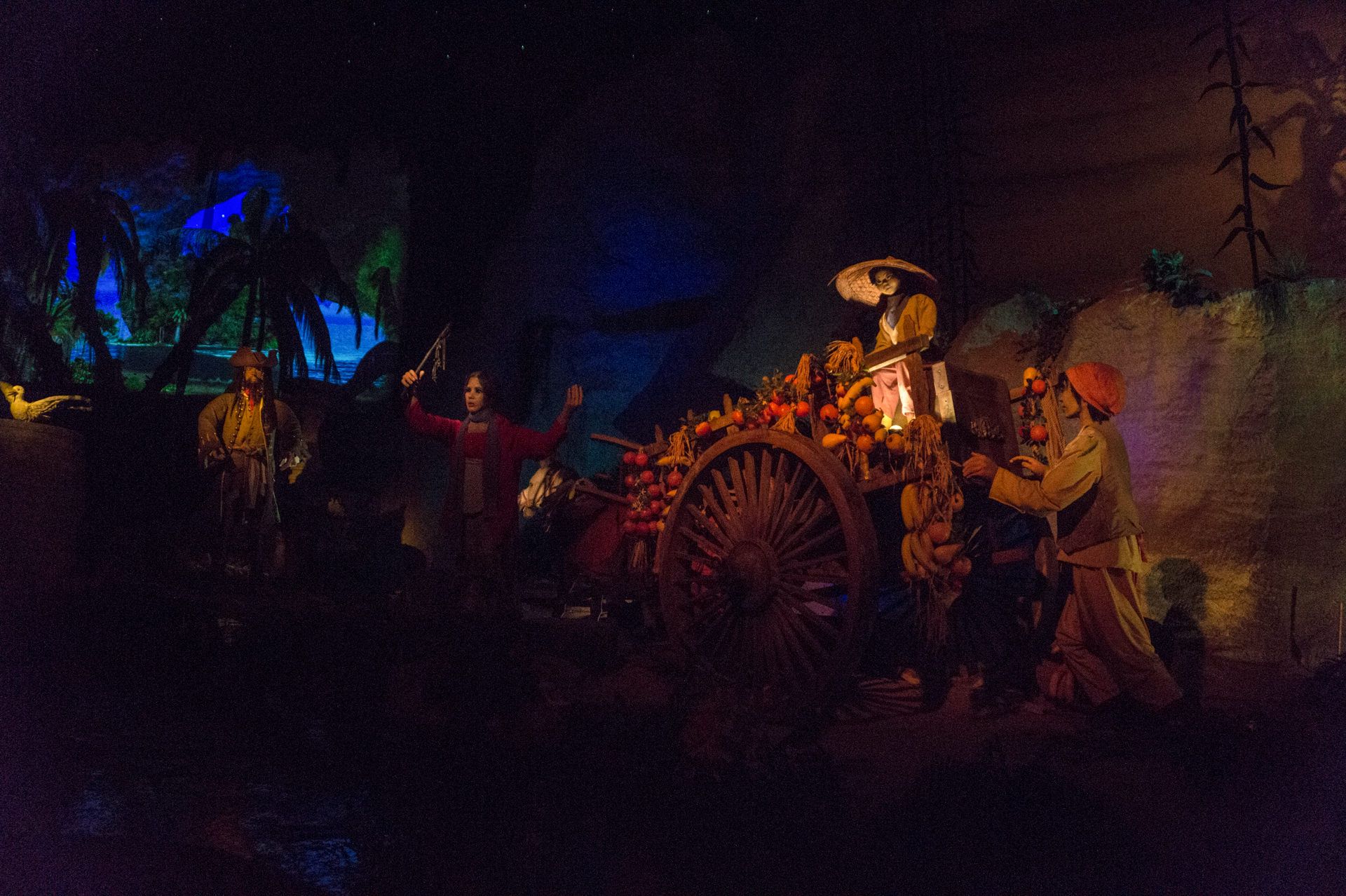 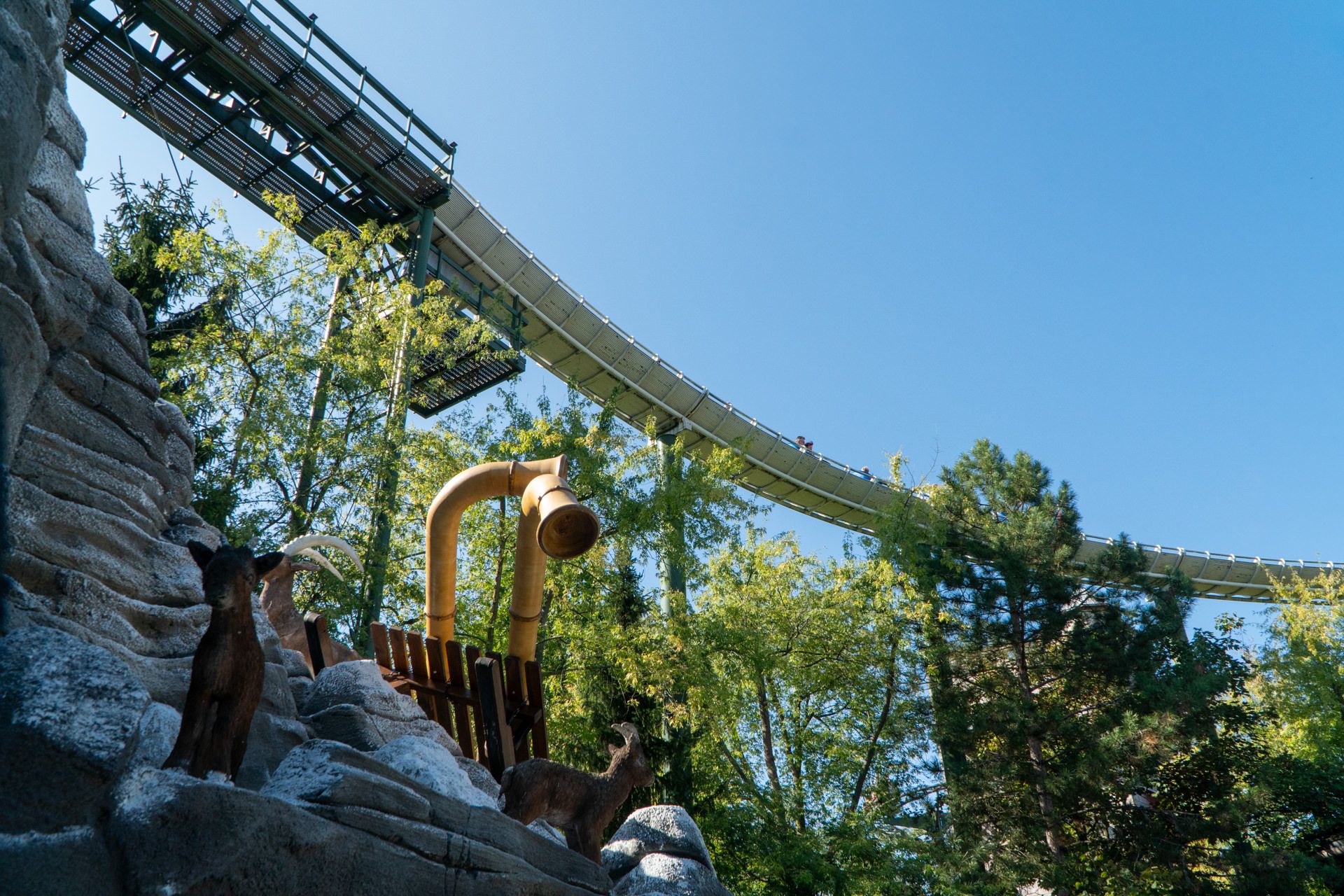 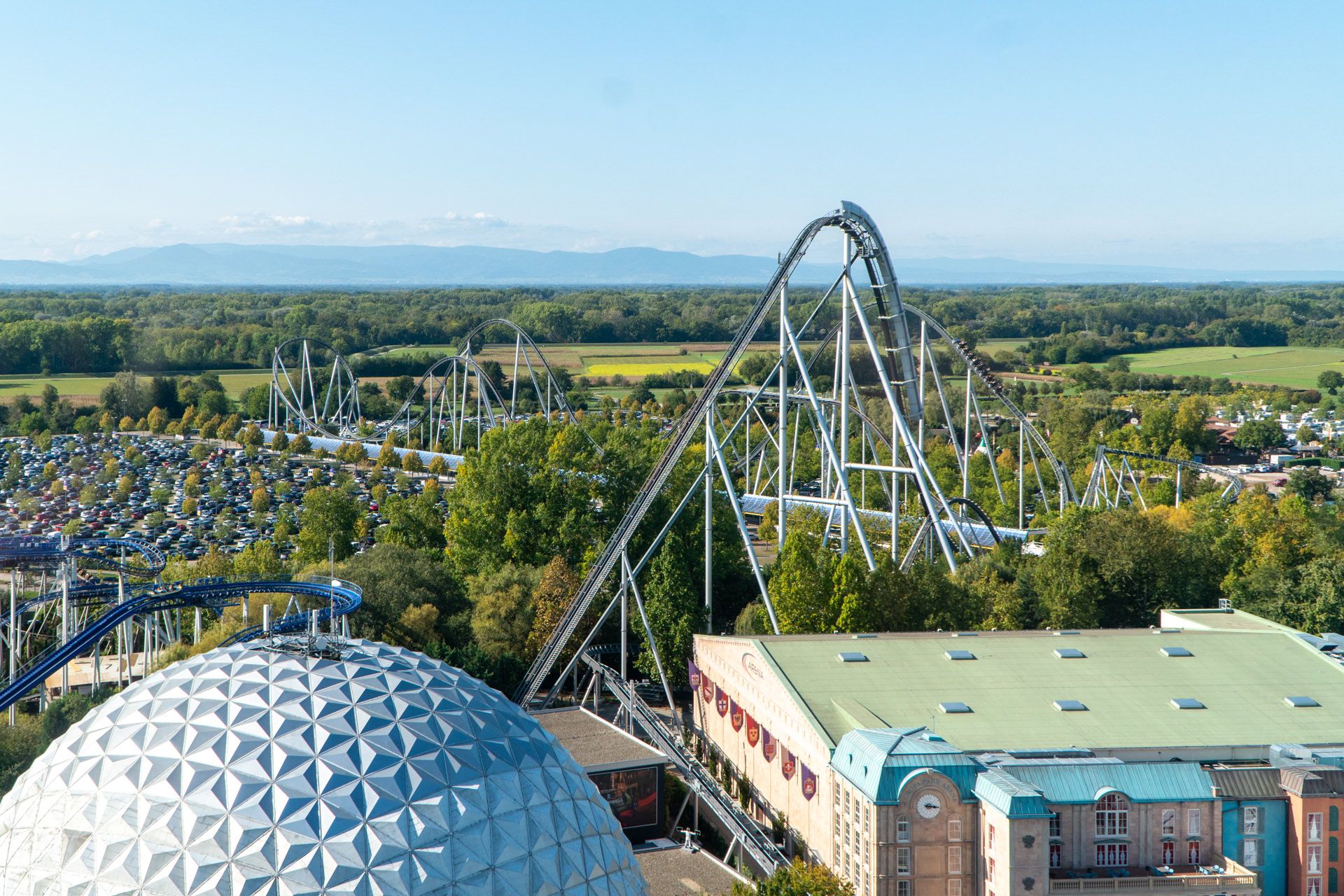 The large coaster you can spot in the distance 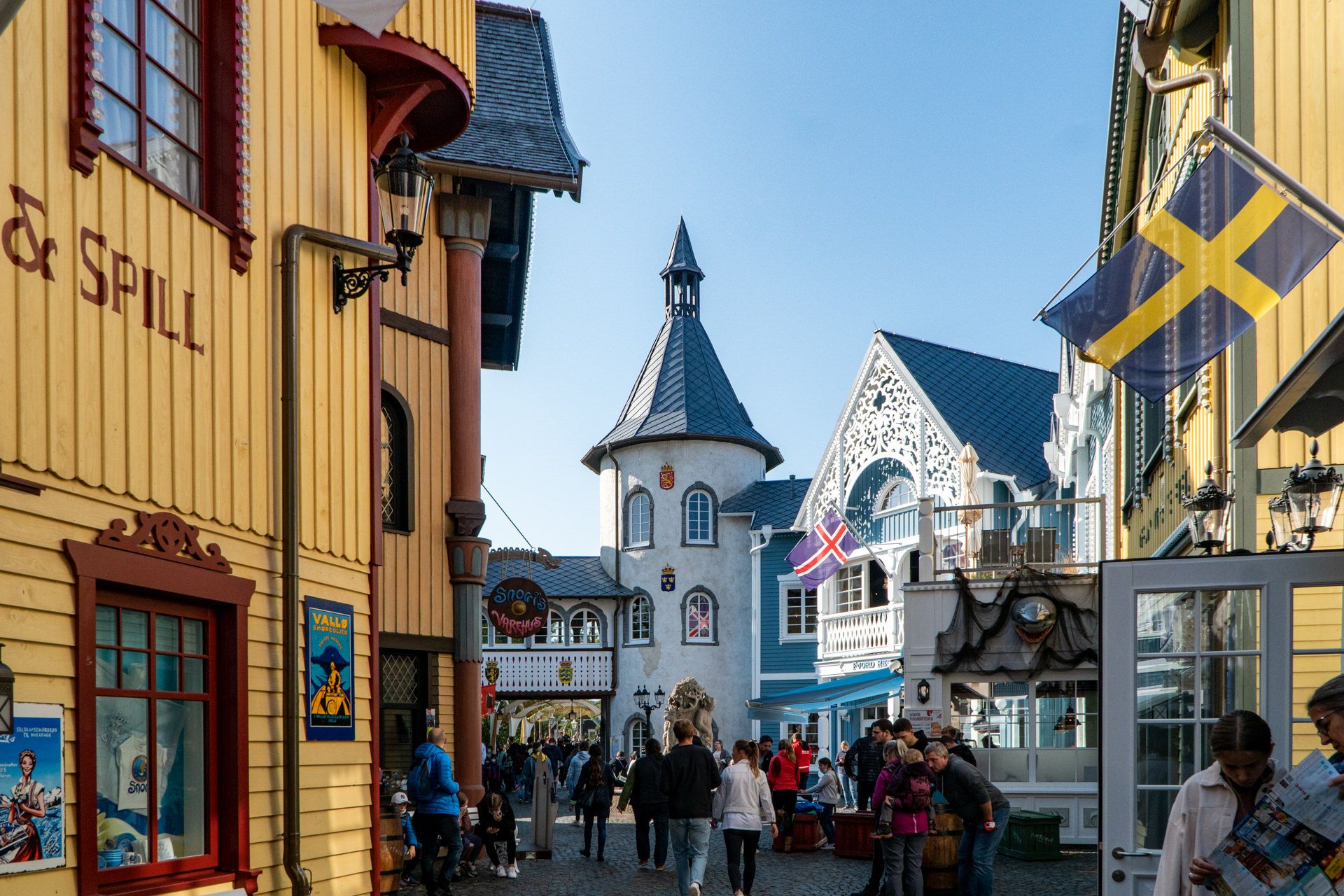 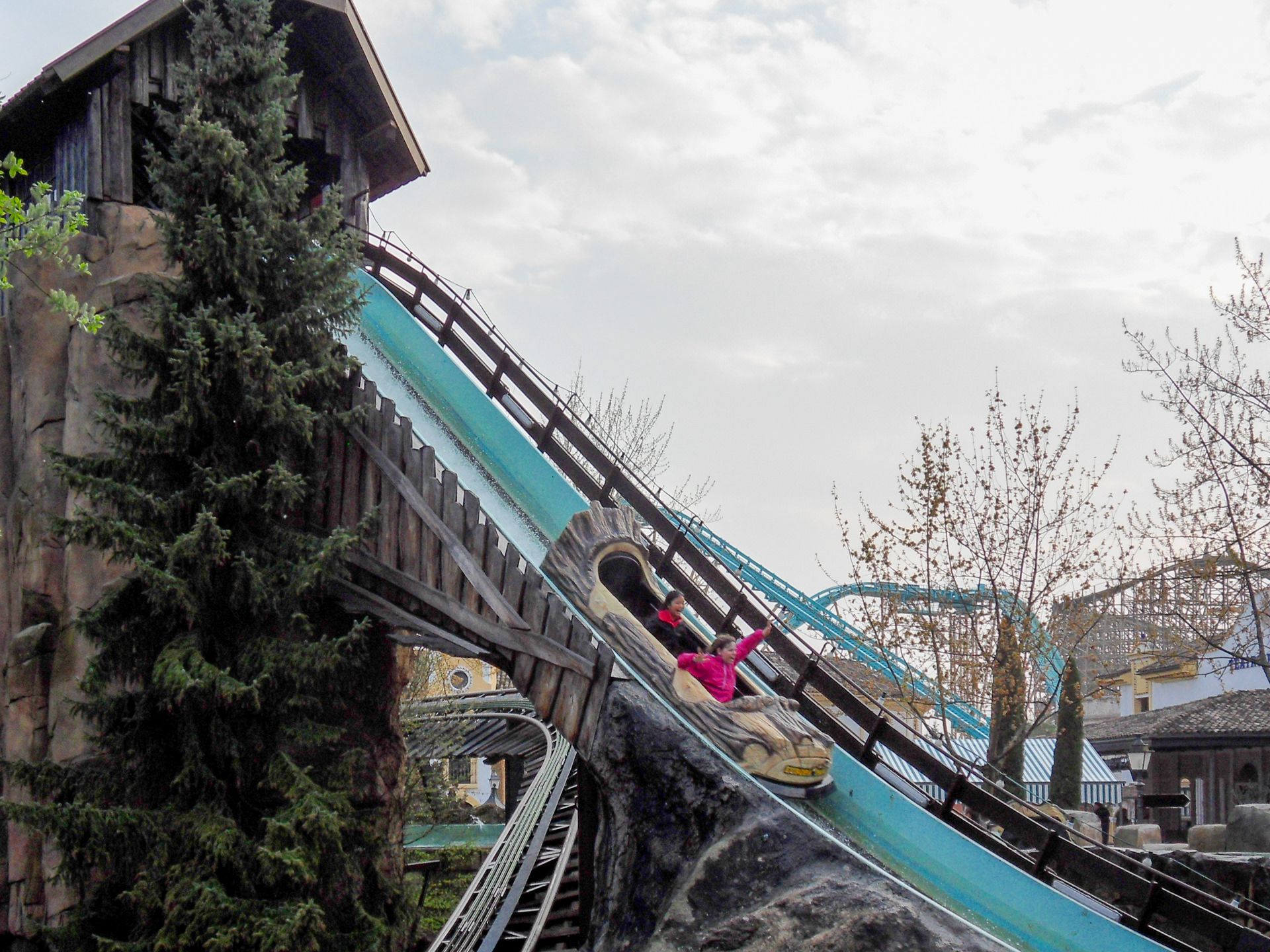 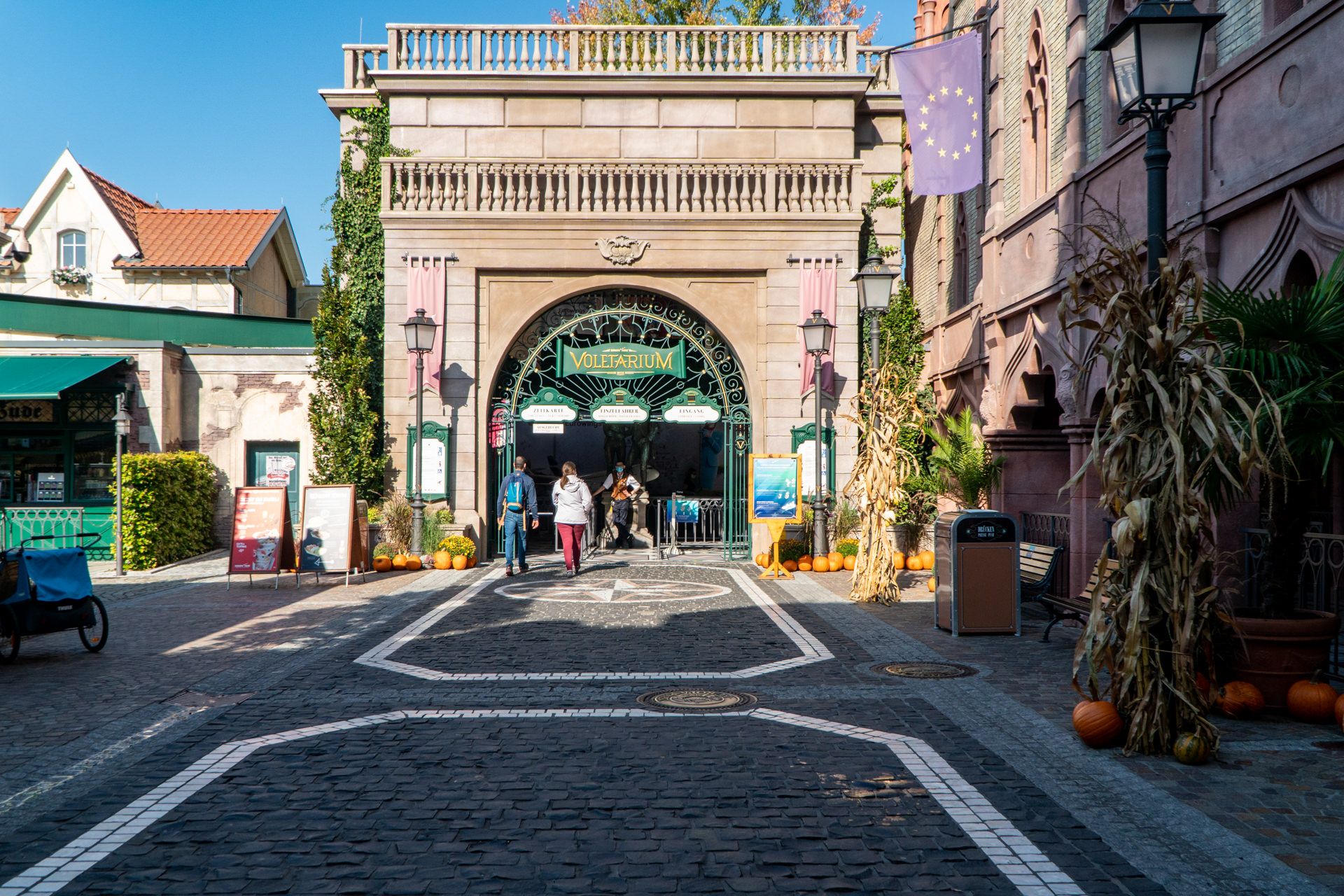 The flying theatre right at the entrance of the theme park 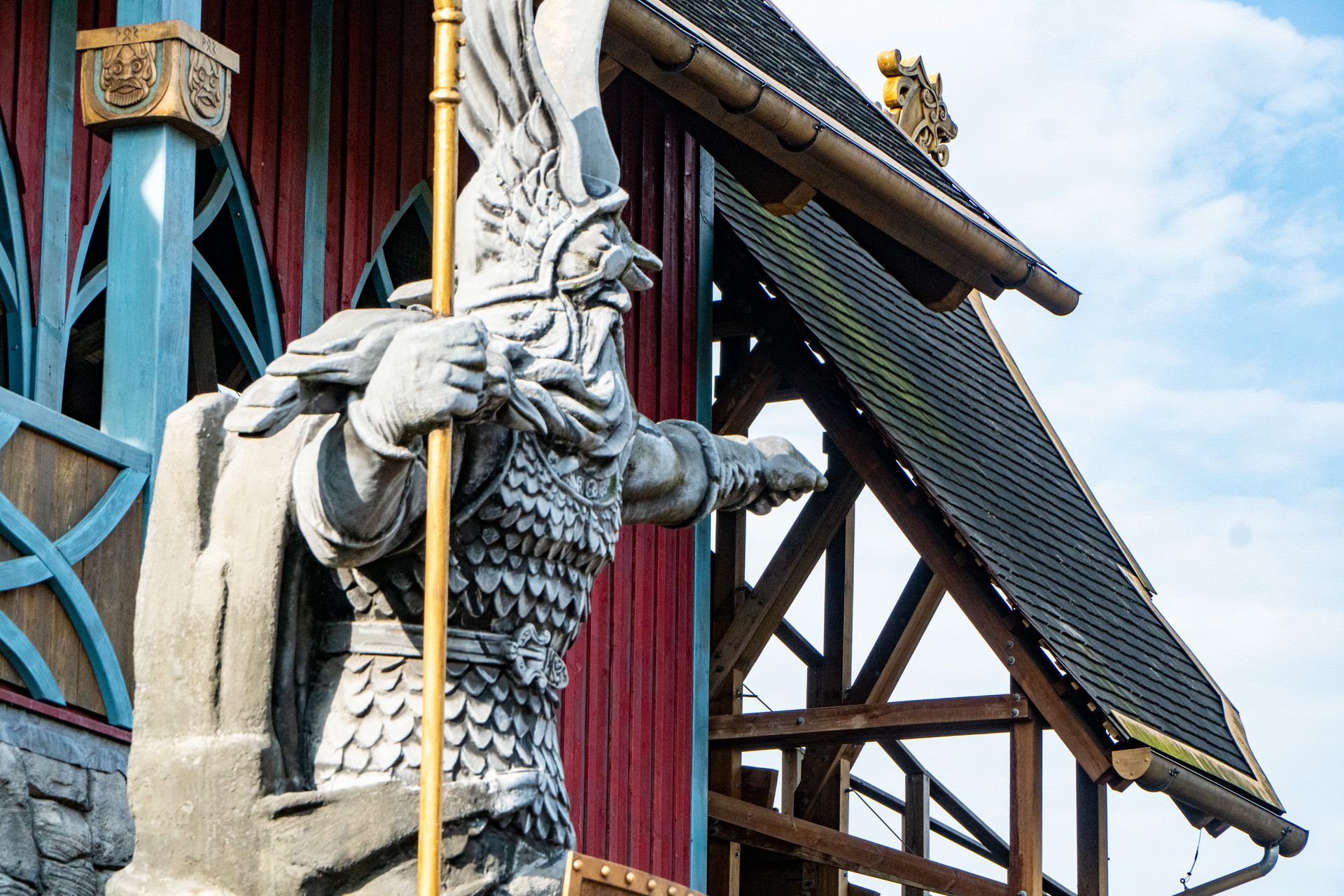 A short GCI with a great pacing

Well, who would have thought that Batavia would actually burn down one day. Two years after the disaster at Europa Park, we were determined not to miss the new edition of the Piraten in Batavia dark ride, as well as some of the other novelties of the last three years.

The Novelties of Europa Park

The Voletarium in the entrance area of the amusement park marks the beginning of our little round-up. The ride is the first project under the guise of the Adventure Club of Europe, a fictitious adventurer’s club that links the innovations of the last few years a little bit and is therefore also supposed to function as a trademark of Europa Park. As with the new water park Rulantica, this is taken ad absurdum by various novels, making it difficult to follow the plot once again.

Leaving it at the essentials, however, the Voletarium is a so-called Flying Theatre by the company Brogent Technologies. The flight simulator offers a breathtaking, but very family-friendly, flight through Europe. However, not every transition between the individual scenes is successful, nor logically implemented, so that the film comes across as a little weak in comparison to the really well-done film of Fuji Airlines in Japan’s Fuji-Q Highland or that of Sky Voyager in Australia’s Dreamworld.

Nevertheless, the Voletarium’s location enhances the front section of the park. The ride is coherent overall and is ideal as a ride for in-between.

It’s the same with Jim Knopf – Reise durch Lummerland. In the best Europa Park style, they did not miss the opportunity to integrate another licence into the park – this time one that is mainly known in German-speaking countries. The children’s locomotive Old’99, which previously had a circus theme, was redesigned for this purpose. It’s old decoration found a new home in a small pavilion of the neighbouring marionette boat ride. Accordingly, you now travel with Emma the locomotive through Lummerland, well-known from the book by Michael Ende, which is a really great experience, especially for smaller children.

It’s a similar story with the immensely popular dark ride Snorri Touren, which moved into the basement of the Scandinavian themed area when it was rebuilt. On this tour, Snorri – the mascot of the Rulantica water park – leads us through the legendary water world outside the gates of Rust. Thanks to the vivid design and the largely successful media integration, the ride does a lot of things right – only the short slide sequence, in which the car drives onto a moving platform, is reminiscent of early Playstation 2 titles due to its spongy graphics, and thus dulls the actually coherent overall impression immensely.

Something you can somehow forgive the cute Snorri for, you can’t forgive Madame Freudenreich for the life of her – after all, the Universum der Energie used to be the most coherent dark ride in the entire theme park. Now the ride is no longer even a shadow of its former self, but an attraction you should at best stay away from. Smaller children might still enjoy the Alsatian gugelhupf dinosaur mash, but I can’t think of anyone else who could halfway tolerate this baloney.

It’s a good thing that the Green Fairy has moved in directly above it. Since its redesign, the indoor roller coaster Eurosat CanCan Coaster has taken us on a sensory intoxication. Driven by absinthe and the familiar sounds of In A Second Orbit, we climb up the drum lift in familiar fashion before the Galop Infernal kicks in and we basically encounter a brand new roller coaster.

Like in a CanCan, we swing through the curves. Past large black-light backdrops, we race faster and faster through the dome and are even lifted out of our seats a little in between. The fact that the experience is absolutely smooth makes the ride all the better.

Eurosat has always been a good indoor roller coaster. A bit rough on the ride, but quite entertaining. Eurosat CanCan Coaster on the other side is one of the roller coasters of Europe. Perfectly balanced, atmospheric and with a great show value. Everything is just perfect on this ride.

But that really only applies to the CanCan Coaster. There is also Eurosat Coastiality. While one side has been able to soar to new heights thanks to its collaboration with the Moulin Rouge Variety Theatre, the other side is betting on a VR experience based on Luc Besson’s Valerian – The City of a Thousand Planets.

In principle, I find VR roller coasters fun and Europa Park has already shown on the Alpenexpress Enzian what you can squeeze out of a roller coaster. Despite the outdated graphics, the first film was a revelation beyond compare. After that, many parks joined the VR trend and there seemed to be no stopping them. Fortunately, as quickly as the trend came, it disappeared again, so it’s a little surprising that Europa Park is the only park in the world that continues to promote the technology. Thanks to the resort’s stand-alone attraction Yullbe, however, this is actively no longer happening in the parks.

Eurosat Coastiality is, at least in theory, an extremely passable upcharge attraction that barely if at all affects the capacity of the Eurosat CanCan Coaster thanks to a separate station, which eliminates one of the main points of criticism of VR roller coasters. However, the ride is strenuous and not very impressive thanks to the outdated graphics. The show value of the roller coaster is completely lost, which is why there is no incentive for a repeat ride.

Meanwhile, the dark ride Piraten in Batavia, which has undergone a complete makeover thanks to the new construction, offers plenty of reasons to go on a ride. What was previously a long-winded rip-off version of Disney’s Pirates of the Caribbean is now much more independent thanks to a consistent storyline around the adventurer Bartholomeus van Robbemond and his otter Jopie. The Piraten in Batavia ride is thoroughly entertaining and offers an overall high show value, which is why it should by no means be missed.

As you can see, Europa Park has been in quite a redesign frenzy in recent years. Some of the projects were long overdue and some of the park’s attractions would actually still like to see such changes. Not every upgrade is a success and not every licence is a plus for the park, but in general the Mack family’s drive is positive. They are trying to show a world-class amusement park to an ever-growing number of visitors, but unfortunately they often forget that great attractions do not need additional media integration.

What is your opinion about Eurosat CanCan Coaster, Piraten in Batavia and the other Novelties? Just write them in the comment field below the report or in our social media channels:

Actually, the Irish themed area was last year’s novelty and it would certainly be more interesting to talk about this year’s novelty; but just like the redesigned children’s land with the children’s roller coaster Ba-a-a Express, the new flight simulator Voletarium will not open until the peak season. On the one hand, it’s a pity, as always, when a new attraction doesn’t open at the beginning of the season, on the other hand, it’s Europa Park – you’ll soon find out again anyway, regardless of the self-congratulation as the best amusement park in the world, the negative touch of this boastful advertising campaign is only of interest to the brains behind the advertising anyway; the rest knows anyway that Europa Park is one of the best amusement parks.

In contrast to other amusement parks worldwide, however, Rust is surprisingly down-to-earth when it comes to the design of the children’s area. In fact, they are surprisingly independent and do not rely on small children’s series licences, as is the case with the English population who are enticed en masse into these areas (whether at Paultons Park, Alton Towers or Drayton Manor). Instead, they trust their own concept and allow the former world of children to have a comprehensive theme area design with lots of humour and wit. St. Patrick at least can be satisfied, the Irish themed area is pretty nice.

The main reason for visiting the park on this Easter Sunday was a ride on the Ba-a-a Express, the park’s newest roller coaster. Designed and built by ART Engineering GmbH, with the rails themselves bent at Mack Rides, this small ride primarily entertains the park’s younger audience; whose entry into roller coaster riding previously could only be made on Pegasus or the Alpenexpress, or possibly on the Wild Mouse Matterhornblitz or the Schweizer Bobbahn.

The compact layout can be quickly reproduced and is just as easy to drive through. After you have gained a few meters of altitude in a right-hand bend equipped with friction wheels, you descend on a leisurely straight. This also leads immediately into a left-hand bend, whereby a change of direction follows just as quickly and you complete the rear turn. Thereupon a short S-curve follows, after which one reaches the station. All good things come in twos and so you cross the track once more before you finally come to a stop.

The Ba-a-a Express is a nice children’s roller coaster with a surprisingly comfortable train and an admittedly very interesting technology; after all, the floor of the station is lowered on both sides before the train can leave it, but the railings at the station ends are not folded away. I didn’t quite understand that, but I suspect maintenance reasons for this, because it really doesn’t seem to be safety-relevant to me. Well, for the target group the roller coaster definitely is more than adequate, and parents will certainly have fun during the ride, too. Moreover, the design of the ride is quite fluffy.

What is your opinion about the Ba-a-a Express roller coaster? Just write them in the comment field below the report or in our social media channels: