Walibi Holland near Biddinghuizen in the beautiful Flevoland is one of the largest theme parks in the Netherlands. Founded in 1971, the amusement park can look back on an eventful past. When the park reopened in 1994 as Walibi Flevo under the leadership of the Belgian Walibi Group, nobody could have foreseen that a few years later the group would be taken over by Premier Parks, who would then operate the park as Six Flags Holland and expand it massively. With the takeover by the Compagnie des Alpes, the company returned to its original roots.

Walibi Holland offers a great mix of family-friendly rides and thrill rides. The focus of the amusement park is not on children, but rather on teenagers and young adults, which is further underlined by the current festival theme.

Fun Fact #1: Eddie de Clown is the icon of the Halloween season. Walibi Holland offers with the Halloween Fright Nights one of the most famous and elaborate Halloween events, which is also internationally known and therefore usually sells out quickly. 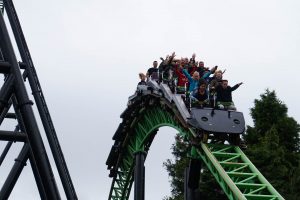 Fun Fact #2: As the train of the roller coaster La Via Volta was used on the roller coaster Wipeout in the English Pleasurewood Hills, the Boomerang stood around unused for several years. It wasn’t until the redesign to Speed of Sound in 2012 that the ride was put back into operation.

Fun Fact #3: The theme park can be played as a scenario in the computer game Roller Coaster Tycoon 2. One of the best steel coaster A weird ride with an awesome first drop The Boomerang with the sound system One of Europe’s best coasters The spaghetti bowl coaster with the awesome queue The Wilderness of Walibi Holland

Up to now, Rocky Mountain Construction (RMC for short) has usually created new life for older wooden coasters with a bad reputation, but that it would also affect very solid and absolutely great wooden coasters, was new. Robin Hood has been one of my favourite coasters since my first ride in 2009, at times due to the uncertain future of the wooden roller coaster Colossos from Heide Park in Soltau, it was even on the first place of my wooden roller coaster favourites – so why rebuild it? Don’t get me wrong, I am on your side. For the park, the modification has advantages that shouldn’t be denied, be it the lower maintenance effort or the great advertising effect of such a roller coaster. Untamed is on everyone’s lips and that has its reasons.

With the arrival of Untamed, the theme area Sherwood Forest has also undergone fundamental changes and has thus adapted to previous adjustments in this area. The theme area Wilderness picks up the festival theme of the amusement park and complements it with new, hip planting and colourful painted rides. The slick top Spin Excalibur has become Blast, and the formerly discreet looking castle of Merlin’s Magic Castle now looks like it’s out of a drug trip due to its wall art. Apart from these adjustments there are no other changes, which is a little bit strange, especially when riding on the Vekoma Mad House.

Nevertheless, let us now come to a ride on the new roller coaster Untamed. After you have left the now beautifully designed queue behind you, or after you have waited a little bit on the stairs in front of the station as a single rider, you are assigned a seat. Shortly after that, the employees expertly close your bar, whereupon the ride starts effectively. After the station there is a turn tilted to the wrong side, whereupon the lift hill of the roller coaster is reached. This takes you up to the starting height of 36,5m and thus 4m higher than it was before.

With a maximum inclination of 80° we immediately fall to the ground. Here we race over a very tiny speed bump before we skilfully screw ourselves up into the air. Very similar to a banana roll we experience the 270° Double Inverting Stall, in which we roll away first in one direction and then in the other direction and in between we also experience some lateral airtime. Back on the ground we immediately witness a double-up element rich in airtime, whereby we merge into a left turn. Two more hills later we turn upside down once more as we approach the turning point of the ride, which is the front turning point from the visitor’s point of view. After a pressure-packed turning manoeuvre, we dedicate ourselves to the way back, whereby we now go over numerous hills with a good pinch of ejector airtime. Here we hit the bar again and again, which efficiently prevents us from falling out of the train. Over a twisted hill the final part of the ride is initiated. Now, the ride goes over hill and dale in an ever faster and faster pace, before another roll (just above the ground) is introduced. After this fulminant orgy the train drops down again quite suddenly, before the braking section of the layout is reached.

Untamed is a dignified successor of the wooden roller coaster Robin Hood. The ride is simply breathtaking and has many unique elements, which are just wicked and absolutely great. Accordingly, Untamed did everything right. I would have liked to ride it more often than just two laps, but I’m sure this will come true, if the first rush will have settled down sometime. Until then I remain curious about my next ride and, as always, I am looking forward to another visit to Walibi Holland.

What is your opinion about the roller coaster Untamed?  Just write it in the comment field below the report or visit our social media channels:

Slowly but surely one can say that Walibi has recovered from the Six Flags era. The re-branding of the brand in 2012 and the changes in the park that went along with it were long enough, but there were no novelties except for the reactivation of the roller coaster Speed of Sound and the truly ingenious design of the launch coaster Xpress: Platform 13. As successful as the restructuring of the park around the fictitious bands W.A.B. and The Skunx is, it seems that people in Holland prefer to go their own way and simply throw a lot of things overboard; because “Hard Gaan” and so on. There’s not much sense in that anymore, especially since they now serve a rather antisocial clientele. But what can you do when the biggest competitor serves all other target groups? As a first step to go fast, according to the literal translation, was to rob Speed of Sound of its soundtrack. Sure, the new track is good, but it takes away its history. The second step was taken this year with the opening of the roller coaster Lost Gravity.

The design of the queue is wacky, but partly very conservative and inevitably reminds of the roller coaster Dizz of the Belgian amusement park Bobbejaanland. A lot more would have been possible here, especially since the custom-made comic universe of Morvan, L’Hermenier and Wuye provided a lot more possibilities. The cars of Lost Gravity, on the other hand, are truly unusual. Similar to the Intamin Wing Coasters, they offer two seats with a corridor and two without, but also have a high front. The seating comfort is great and the design of the cars has very little, or more precisely, a negligible effect on ride comfort.

The ride begins with a right turn out of the station before it quickly climbs up via a chain lift. Without any rest the car immediately throws itself down the 32 height meters in an insane way; at least this is the case if one has taken a seat on the left side of the car. The extremely steep and widely twisted gradient is breathtaking without question, but at the right side it is almost boring compared to the left side, the radius is simply too narrow. With a lightning speed you pass over a ground level double-up, over whose hill you literally fly, before you find yourself on a top-hat element that is slightly tilted to the side; which you could also describe as a non-inverted banana roll, if you like. Somewhat contradictory to the previous layout is a huge camelback hill, which takes the passengers out of their seats again. At a breathtaking height, one now races through a wide turning curve, which in addition is also tilted outwards. So far, so good, and if Lost Gravity would end now, it would be a very short roller coaster, but also an extremely ingenious one. But instead of the final braking section there is a block brake followed by the second part of the ride.

After having reduced your speed, you now lean to the side and dive towards the ground again in a dive loop. A tight turn and a Zero-G roll are now carried out in a very tame way. The next turn will also be a turn where at least one of the acceleration vectors is zero. As a result, it is no longer possible to speak of a dynamic ride. You constantly brake and accelerate from new, which is equivalent to the accordion effect known from traffic jams. Over a hill you change direction again, cross another hilltop, pass a last pressure-laden valley, make a last turn and then find yourself in the final brake of the ride.

Lost Gravity is an excellent roller coaster for a little stop along the way, but nothing more. The first rumors were still about a revolving gondola roller coaster, this would have been hardly feasible with the first part of the ride, but ideal for the second. Either way, the first part is absolutely amazing, but the second one is wasted. The last curves are still a lot of fun and let you leave the ride with a little grin on your face, but the premiere of Mack Rides Big Dipper was not as convincing as it should be; at least there is enough potential for further installations.

Finally, I would like to appeal to human reason, which Dutch students probably no longer call their own. I assume that the student in question is striving for an equivalent to the German Abitur (as nowadays everyone does) and therefore should not be stupid – but how could one come up with the idea to sit on the seat and hold on loosely in a rafting ride with movable boats, like Rio Grande is? This is dangerous and should normally be rewarded immediately with exclusion from the park for a lifetime. If this boy would have fallen into the water and drowned, I would have neither been shocked nor worried about him; in fact, it was predictable. His buddies were similar, but in the postfactual age, you can’t let something arbitrary like rational rules distract you from your own horniness. Let’s all have a selfie! Yeah!

Walibi, you’d better think about Hard Gaan again, you might not be doing yourself any favours in the end.

What is your opinion about the Lost Gravity roller coaster and #Hard Gaan? Just write them in the comment field below the report or visit our social media channels: