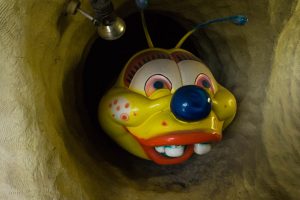 Fiabilandia in Rimini is one of the oldest theme parks in the country. Founded in 1965, the park was created during the boom in Adriatic coastal tourism and can therefore look back on a long history full of ups and downs. The small amusement park is famous for its larger fairy tale rides, all of which are located in the front part of the park.

Fun Fact: The park is home to the first Brucomela / Big Apple roller coaster. Nowadays you can find this type of roller coaster almost everywhere.

A child-friendly mine coaster

The fairytale land of Rimini is one of the oldest amusement parks in the country. Opened in 1965, Fiabilandia had its heyday with German mass tourism on the Italian Adriatic Sea until the mid-1980s. A steady decline in the number of visitors led to the sale to the owners of the safari and amusement park Zoosafari Fasonolandia, who gradually refurbished and slightly extended the park.

In the front area of the park, Fiabilandia looks quite impressive, especially since most of the older rides are located here and actually still show a little of the original fairytale park charm. Here you can find the dark rides Il Castello di Merlino and Il Lago del Sogno, as well as the maze Il Labirinto di Fu-Ming.

Following the route of the Fiabilandia Express, after a short while you will come to La Baia di Peter Pan, where you will find Captain Hook’s ship and the hiding place of Peter Pan. The latter can even be visited, and you can even see the childish rascal in a hammock. From here you also have a good view of Lake Bernado, a quarry pond around which the park is located.

Passing a mat slide and trampolines we enter the western themed area of Fiabilandia, which has visibly left its best days behind. Next to a small show stage with an adequate scenery there is a walk-in fort and the roller coaster La Miniera d’Oro, which winds its way through an artificial mountain and past an Indian village.

After you have climbed the wagons, the journey begins very shallowly with a right turn and then a slightly longer straight line. After a short left turn and an U-turn you reach the first lift hill of the ride. At the top the train disappears in a lefthand curve into a tunnel where some crystals, which look like cacti, are colourfully illuminated. Over some waves you increase a little bit in speed and are surprised by a bear animation. Shortly afterwards you leave the cave in a right turn, followed by a gradient with a holding brake. Unaware and delighted that the ride is finally speeding up, you are slowed down to a standstill and after a short stop you continue to move at a walking pace. In a short slalom you cross the Indian village and then disappear into another cave that contains the second lift hill. Once again at lofty heights you can enjoy the sun for a while before entering another tunnel. Completely by surprise, you will now pass through a distinct slope with subsequent ascent, which has even been given a light effect. Back in the fresh air, two very flat serpentines follow, which lead the train back to the station.

La Miniera d’Oro is a nice dark ride where there is not much to see. It was built sometime in the 80s by Pinfari and is therefore one of the last attractions of the golden era of Fiabilandia. Younger children in particular should have a lot of fun on the ride, while the adults enjoy the greater amount of space in the car and the speed rush towards the end of the ride.

Passing several circus tents and a 3D cinema, you approach the next highlight of Fiabilandia, the Valle degli Gnomi. The ride, built in 1976, also by the Italian manufacturer Pinfari, was once opened under the name Brucomela and is the prototype of this type of coaster, which tries to take over the world in a small transportable model. In fact, it is the most built roller coaster in the world and is offered for sale by several (mostly Italian) manufacturers.

The journey begins with a slight left turn, which is immediately followed by a right turn. Over several bumps you now cross a straight line which ends in a cave. In this cave a turning curve is made, where you can catch a first glimpse of the gnomes that give the cave its name. They are enjoying themselves in an underground lake. After a short detour to the right there is a slight drop followed by another turn to the left around a small lake. This immediately takes you to the only lift hill of the ride. The lift takes you up along various animatronics, freely inspired by the seven dwarfs from the Disney classic Snow White. At the top, a right-hand bend above the first tunnel leads you along an ugly blue wall and the house of the dwarves. Several small zigzag bends now lead through two large apples, where we can watch another caterpillar at work. Via a small drop with holding brake we reach the level of the station, which we enter soon after.

Next to the very nice dark ride there is also the third and last roller coaster of Fiabilandia. The Space Mouse is the biggest roller coaster of the park and unfortunately not necessarily the most beautiful one, but it is, like the log flume next door, an unparalleled advertising medium due to its location directly next to the neighbouring main road.

The ride in the Fabbri Power Mouse starts as usual with the two-part lift of the ride, with a narrow left turn in between. At the top you immediately take a small drop which takes you to the other side of the ride. This is followed by a narrow hairpin combination of three extremely compact serpentines. After a block brake you cross the station on another small gradient before you dedicate yourself to the big shots, each initiated by one curve. After a final double drop you reach the final brake and immediately the separate exit area of the ride.

The ride on the Space Mouse would have been fine if it weren’t for the miserable handling at the ride, where only one car at a time made its way through the track, while all the others waited unmanned in the station. Even after boarding it took a while until the car was sent off, which made the short waiting area quite long.

After all the rides were done, we went past several children’s carousels, some of them taken from Movie Park Germany, and a splash battle from Preston & Barbieri towards the exit. It was about time, as Mirabilandia near Ravenna, 60 km away, should not wait any longer. My mood was already down, as I had last experienced such a desolate park with the Portuguese theme park Magikland in Penafiel near Porto. Although the number of attractions here almost justifies the high entrance fee, the decay of the park is more than just noticeable. The few interesting attractions could have all been completed in a few minutes, but the delayed opening of the rides prevented this from happening with bravura and forced us to spend considerably more time in the park than I personally would have liked.

What is your opinion about the theme park Fiabilandia? Just write it here below the report in the comment field or visit our social media channels: