Cigoland in Kintzheim, France, is a small, family-run amusement park which is entirely devoted to the rearing of white storks. Opened in 1974, the animal and theme park houses a very solid selection of family-friendly rides, interesting playgrounds, as well as some larger animal enclosures and aviaries. A special feature of the park is that, in addition to the storks in rearing, there is also a large number of wild storks in the park. Thus there is a rattling in every corner of the park. 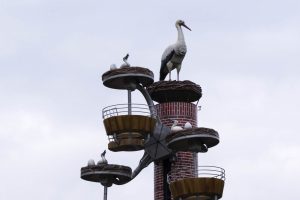 The Zoo and Amusement Park Cigoland was founded in 1974 by the Willmann family and has remained in family ownership ever since, although both the zoo and the amusement park have only developed over time. After all, the park began as a small inn around the family’s existing farm, which gradually developed into a tourist destination throughout the region. The stork is of particular importance for the park, which was named after it. Although Alsace has always been known for its great number of storks, this species was threatened in its existence, which is why nature parks and breeding programmes were created in the early 1970s. Today, the park still successfully breeds white storks, but once released, they are happy to return and enrich the park and the region.

When you enter Cigoland, you will find an electric horse-riding track and a circus on the right-hand side. However, there is not much to see in this part of the park, apart from two larger enclosures. If you then follow the path towards the spacious inn, you will suddenly see a much more compact park layout. In addition to several carousels, bumper boats and playgrounds, there is the rotating theatre show Les mondes Extrêmes, during which, accompanied by numerous effects, one travels through the four different climate zones of our world.

This is followed by a larger animal area, where several breeds of domestic animals are presented in their enclosures. Right in the middle of it is the Cigopanoramique ride, a flying wheel made by Metallbau Emmeln, from which you could have an excellent view of Cigoland if you weren’t to go crazy in the giant teacup wheel. As always, this is a magnificent ride, which presents itself excellently in the park and is absolutely tailor-made for the young family audience of Cigoland.

Speaking of family audiences, anyone who has always wanted to know how children are conceived in Alsace should get on the Monorail La Cigogne. On the 10 minute tour you will learn all kinds of things about the stork and of course it is the bird itself that brings the children – but only if everything has been prepared for the future child. Accordingly, the Alsace-Frenchman is very well-behaved and can speak three languages without any problems, if only all French guests at nearby Europa Park were like that…

In the rear part of Cigoland there are several aviaries for breeding white storks, and there is also a slightly African-influenced area at the edge of the park. In addition to the spacious vintage car ride Les vieux Tacots, which circles a royal crane enclosure, the King Kong ride is the more exciting model of the modern HUSS ride of the same name. Here a row of seats is lifted by the giant ape King Kong, whereupon you have a wonderful view of the park before the ape takes pity on you and lets you down again. There is no grim face or shaking at all, but unfortunately the rotation around its own axis does not work anymore, so that the ride cannot offer a 360° panoramic view. Nevertheless, the experience is quite special in every respect and therefore even has a certain re-ride factor, which you might wish for in Bremen.

Also a big repeat ride factor is the small Soquet roller coaster Train de la Mine, where you can easily get a large number of rides. After all, you should be active when you want to get off the train. After one or two rides in a row you are asked if you want to stay seated, which you always do through motionlessness, especially in the back and front part of the train.

After a short right-hand bend out of the station, you immediately climb up the lift hill. At the top you stay for a while on a short straight line at a lofty height, before you descend in a steep right turn or are pulled down splendidly especially in the rear part of the train. The following valley is passed through with a lot of pressure, just before you shoot up a rather high hill. Up here, at least in the front part of the train, you make an unexpectedly rough change of direction, which throws you around wonderfully and immediately releases you into a downward helix. At a decent speed you cross the next valley and approach another hill. This is followed by a really fast and absolutely magnificent right-hand curve. After the constant up and down a further valley follows, whereupon after a conspicuously inclined curve the station and thus the brake is reached.

The Train de la Mine offers a surprisingly wild roller coaster ride for all ages. The layout leaves nothing to be desired for such a compact track and can really convince especially with the first downhill gradient and the magnificent finale. The ride characteristics are typically Soquet simply outstanding, even though, depending on the choice of seats, sometimes quite surprising, which is why we always like to stay seated.

Cigoland is a friendly animal and leisure park, which is particularly convincing because of the animals that give it its name. Especially during springtime it is very exciting to watch the animals building their nests, especially as it is quite funny where they get their materials from. Although the number of rides is quite small, they are very well balanced, so you can have a lot of fun here with smaller children.

What are your thoughts about the French theme park Cigoland? Just write it here in the comment field below the report or visit our social media channels: