On my way back from Stuttgart to Hamburg I stopped with all my belongings at the summer toboggan run Wald-Michelbach, which was somehow on the way. The Odenwaldbob can hardly be overlooked on the way there, after all, one winds up the mountain halfway parallel to the Kreidacher Höhe.

In a slightly sloping right turn you leave the station and pick up some speed on a straight line. After a short left-hand bend, you now cross a country road and, after a drop, plunge directly into a left-hand roundabout. At full throttle, you now make several small right/left turns and immediately after that a wide right turn. After a left-hand bend, the ride continues downhill at high speed via several jumps parallel to the lift hill of the ride. After a short left turn, a right turn follows in a slightly serpentine fashion, which then merges into the second roundabout of the ride. This releases you into a wide right turn parallel to the slope, which then releases you into two hairpin bends and shortly afterwards into the braking section. This is followed by the return to the station.

Although the track is consistently equipped with brake swords of different materials resulting in different braking effects of the magnetic brakes on the bobsled, the ride on the Odenwaldbob is consistently fun and you never really had the feeling of being too slow, especially compared to conventional rides with centrifugal brakes on the sled like the Trapper Slider at the Fort Fun Abenteuerland amusement park. The 1000m long downhill run has a good mix of different elements, which makes it dynamic until the end and therefore a lot of fun.

What is your opinion about the Wiegand Alpine Coaster Odenwaldbob?  Just write it in the comment field below the report or visit our social media channels:

After having spend the early morning in Rothenburg ob der Tauber, my friend Hisham and I drove to Heidelberg to meet another friend of us. Together we decided to have a train trip to the nearby city of Frankfurt, where we wanted to have a look at their art festival of lights; the Luminale. Although, I’m not the biggest fan of Frankfurt, after all I only know their busy train station and some high sky scrappers, I was very impressed by the festival, which spreads out within large parts of the city and invites you to have a very long walk along the various instalations.

How do you like the Luminale? Just write it here in the comment field below the report or visit our social media channels:

The last stop on my route back to Hamburg was the Silberseebob near Frielendorf am Silbersee, which I had already visited unsuccessfully two years ago. Although the closure of the ride was still a long way off this time, the way to the lake turned out to be time-consuming due to numerous route closures. Finally found, I parked my car directly behind the Nautic Jet and hurried to the ride. 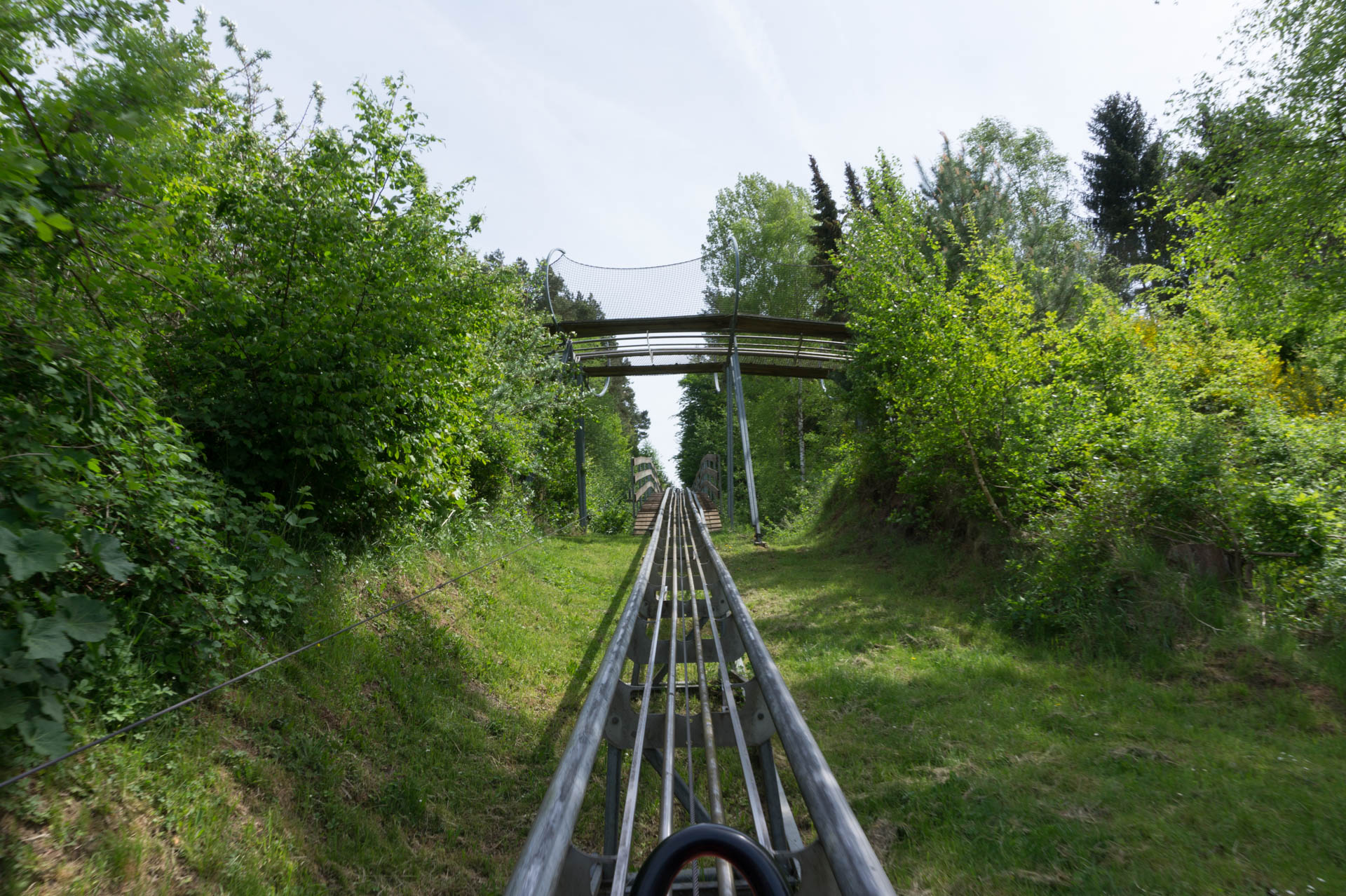 After a short briefing the trip could start right away. After climbing up the lift we immediately went over a small meadow towards the forest. In a left turn you increase your speed steadily before you go down a jump. Another left turn follows, which is immediately followed by a right turn. The path is serpentine yet very fast and leads through the forest until you reach a clearing. Here you change direction and pass two waves. Two turns later you cross the lift hill and approach the end of the ride in a zigzag trajectory.

The Silberseebob is a very nice Wiegand Alpine Coaster, which offers a good and speedy ride. For a little detour to the north or south the ride is highly recommended.

What is your opinion about the Wiegand Alpine Coaster Silberseebob?  Just write it in the comment field below the report or visit our social media channels: