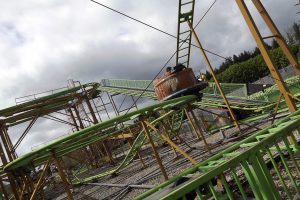 Lightwater Valley, near the small English town of Ripon in Yorkshire, is a medium-sized amusement park with a large number of family-friendly rides, including Europe’s longest roller coaster: The Ultimate! The park was founded in 1976 by fruit farmer Robert Staveley and is currently operated by Livingstone Leisure Ltd.

Fun Fact #1: The park was immortalized in the first Roller Coaster Tycoon from 1999 in the scenario Katie’s Dreamland.

Fun Fact #2: Since there is no technical monitoring system on the track of the roller coaster The Ultimate, the second train does not leave the station until the first one has returned. Europe’s longest roller coaster and sadly it is SBNO 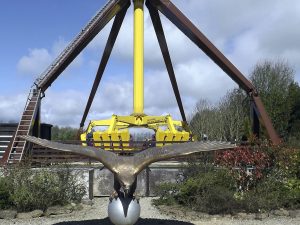 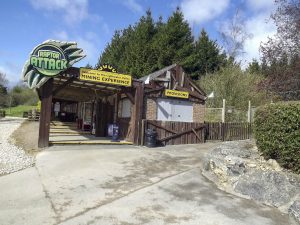 The Yorkshire Park Lightwater Valley is one of the most interesting parks in England and at the latest since the interpretation of Katie’s Dreamland from the game Rollercoaster Tycoon also known to the younger generations, who are now all in their mid twenties. The park is run by Heritage Great Britain PLC, which is also responsible for marketing Land’s End, the furthest corner of Cornwall. Thus, the park is by no means conventional.

It all started with a fruit farm that had to cope with a drought in 1976, which led to the creation of a lake as a preventive measure. Since the lake had already attracted a number of people at that time, the opportunity was taken to create a landscape park and use the farm for tourism. Since the former owner of the park wanted to offer a little bit more, a roller coaster was to be built. But since his wife saw this idea as a disfigurement of the landscape, she said the appropriate words: “I’m not having a rollercoaster on the place, so you stop those idea or you better bury it”.

No sooner said than done and thus, in 1987, the small Schwarzkopf roller coaster Raptor Attack opened far out of sight of the visitors. And even though the ride is located in a hall, it really feels like being a few meters below the ground, because the tunnels that lead to and from the roller coaster really do go downhill for a few meters, until a staircase is waiting for you. Interestingly enough, there is water flowing in the ground in the queue, so that one really feels like being in a sewerage system and not in a mine as now indicated.

The ride in the suitably designed cars turns out to be very surprising, because not only the layout is different from the larger installations, but also the sound level of the ride. Interestingly, this track is hardly audible, even though it is installed indoors, and offers riding characteristics that you wouldn’t expect from such an old Schwarzkopf model. Therefore it can’t be compared to the roller coaster from Skyline Park or the travelling Rock ‘n’ Roller Coaster of the showmen Vorlop, although it is the same kind of roller coaster except for the actual model. The animatronics during the ride are nice and well integrated into the forest of pillars of the ride, but even without them the ride is always worth the wait.

It was Robert Staveley’s wife who suggested to make the second roller coaster of the park a little longer than originally planned, because first ideas were only to use the valleys of the forest further up in the terrain and bring interested passengers there via monorail. Due to the high costs proposed by companies from Germany and the USA, it was decided to let local companies do the job for a much lower price, one for the track and the other for the train. But both went bankrupt and British Rail engineers completed the project.

The Ultimate is the result of this work and truly the ultimate coaster in Great Britain. Hardly visible from the outside, you can catch a train every 7 minutes as it passes by. The ride, which starts quite harmlessly with a lifthill, continues at the same interval. The lifthill can be climbed in peace in order to do the magnificent first drop. On the following hills, which keep following the landscape, you are torn out of your seat a little bit until you slowly ascend towards the second lifthill and complete hills similar to those of a Wacky Worm, only much more pronounced. While the train is climbing the second lift you have enough time to think about the next part of the trip, because until now the trip was quite harmless. After a straight line at an airy height you face a rather steep drop towards the forest, where at its end the first sign of a curve is indicated. The following part is hard to put into words, because it’s pretty damn fast and swings from one side of the valley to the other at a good cross slope. It gets truly reckless on the hills of a clearing, where you do some interesting manoeuvres – still very fast, almost without any inclination. Shortly afterwards two helices in the shape of an eight follow, where you pass two tunnels, whereupon unfortunately the brake run is approaching.

The Ultimate offers an extraordinarily smooth ride during this travel distance that I – according to the reports of various enthusiasts – did not expect. Of course, the knee gets sometimes very familiar with the stupid bar holder, but this is due to the train design and not necessarily to the track itself. It has the one or other rather questionable transition, but it would be wrong to call it a wrong bend. Actually the ride is a little bit wilder because of all these characteristics, but in connection with the length of 1 1/2 miles this makes the ride look a lot better, so that one could only wish the ride would be a little longer. It is definitely the best roller coaster in Britain and therefore always justifies a visit to the beautiful county of Yorkshire.

Many other attractions of the park are less beautifully integrated into the landscape, for example the Reverchon Twister coaster shows itself across the main path shortly after leaving the forest. This spinning mouse is not necessarily the most beautiful of its kind, but it can show a really nice twist, which makes it one of the better representatives of its kind.

Also from Reverchon you find the rafting Wild River Rapids, which to my surprise turned out really well and can get you quite wet. Compared to the Fabbri rafting rides featuring the same layout, this ride is quite convincing.

Directly across the street the Ladybird roller coaster makes its rounds. This is the medium sized ride from the Tivoli series of the manufacturer Zierer, which is known to be quite nice. The interesting thing about this ride was the fact that there are additional belts in the train, which should actually be used. This makes the ride a little bit more harmonic than the constant sliding back and forth in the car, as you could experience it for example at the Coccinelle of the Bellewaerde Park.

In the still quite new pirate area of the park you can ride the Weber’s dream boat Black Pearl, besides a HUSS Pirat swinging ship and a break dance 4 from the same manufacturer, as well as some smaller rides from Zamperla. As with the other rides in this area, the ride came into the park through a purchase of the sadly closed Loudoun Castle theme park of Scotland.

Located in the middle of the forest, there are several children’s rides, including a Big Apple roller coaster called Caterpillar, which makes you feel the bleakness of this type of roller coaster after a ride on the Ultimate. In former times, there must have been a larger Zamperla swing ship swinging in the forest, which now travels on the British fairs. On this side of the park, a holiday park is supposed to be built in the future, at least that’s what the park wishes for to remain successful. In fact, the location is ideal for this and the plans look good, so that one can only hope that they will realise it as well.

Near the Pub in the Wood you can visit the small free fall tower Trauma Tower by Moser or continue your tour. A Ferris wheel gives you a wonderful view over the landscape and the entrance area, where you can find a chain carousel, a classic English carousel and a variety of children’s rides. There is also the entrance to the Afterburner Eagle’s Claw.

Those who know park versions of the KMG rides know that they usually don’t ride as well as on the fairground. But here you get a good ride, which, like the related swing of the Flamingo Land, could elicit some forces and in the interim offers a small break only to then swing out again fully.

Next door, things are a little quieter, as the Eagles Creek Farm, one of this year’s novelties, can be visited there. This is the former tractor train from Loudoun Castle, which was underlaid with a really nasty catchy tune and features some animal enclosures on the side of the ride.

Other new attractions include the Lightwater Valley Falconry, where you can see a variety of different birds of prey, and the Angry Birds Activity Park, which will open soon. Along with the falconry there is the possibility to take a picture with one of the birds on your arm. A rather unique experience indeed.

Lightwater Valley also offers a Mondial TopScan called Whirlwind, which had a long and good ride, the rubber dinghy slides Falls of Terror, which unfortunately follow a strict 2 person per boat rule and therefore could not be tested, and a HUSS Enterprise called Black Widow’s Web.

If one should want to leave Lightwater Valley now, it is worthwhile to first have a look into one of the shops where the Fudge Factory has a branch. In Edinburgh I have already made contact with them, so I was pleased to be able to taste delicious fudge here in Lightwater Valley. Three slices in my luggage and half a fortune less in my wallet I went out of the park, which I remember positively. Lightwater Valley is a medium sized park with two really good roller coasters, which you really don’t expect in a park of this size. It has quite a lot of charm and can entertain you very well for some hours.

What is your opinion about Lightwater Valley?  Just write it in the comment field below the report or visit our social media channels: