Aquatica San Antonio in San Antonio, Texas is one of the newest large scale water parks in America. It was built as a second gate park to the adjacent theme and marine animal park SeaWorld San Antonio in 2012 and replaced the old Lost Lagoon water park. 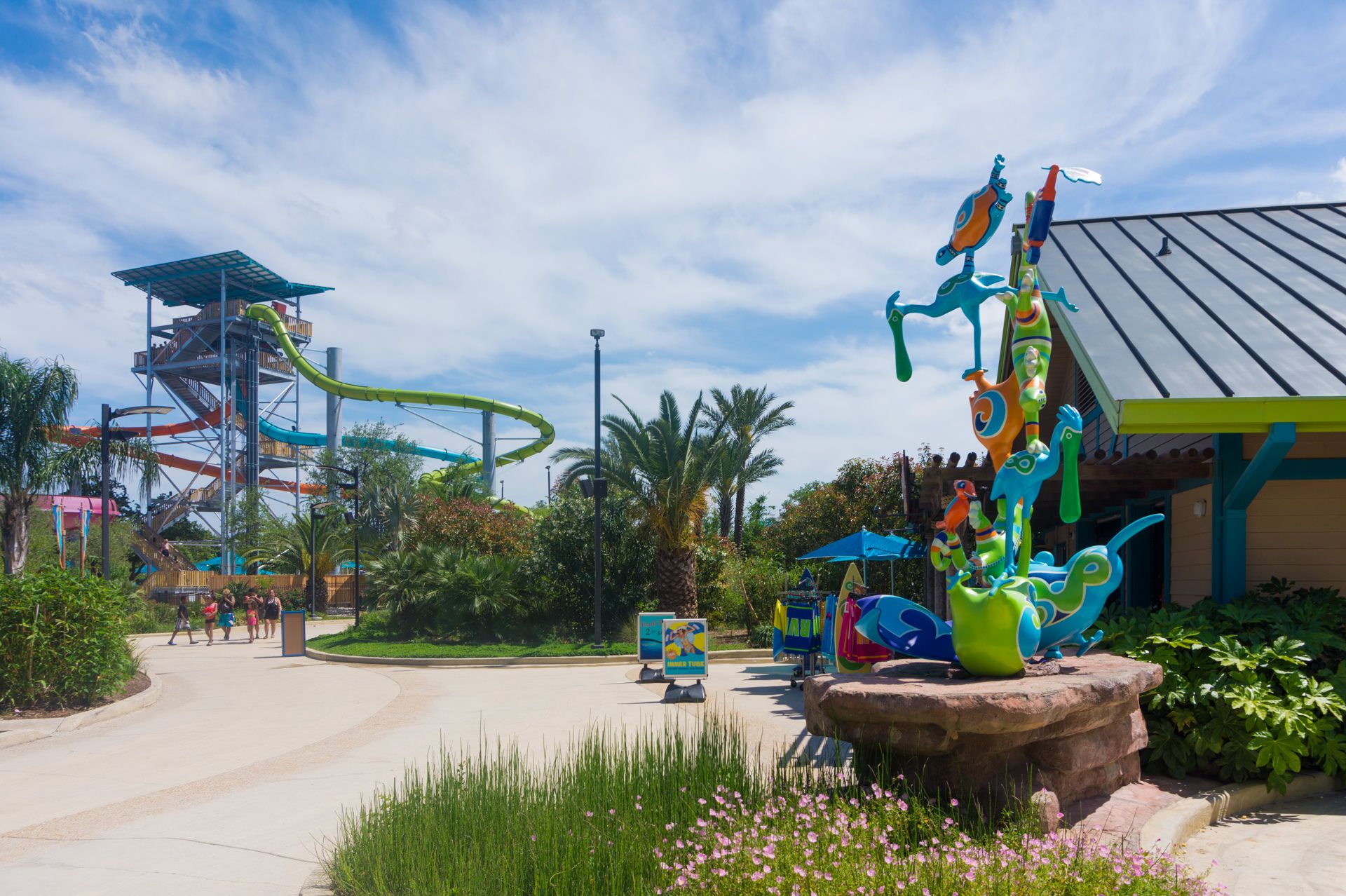 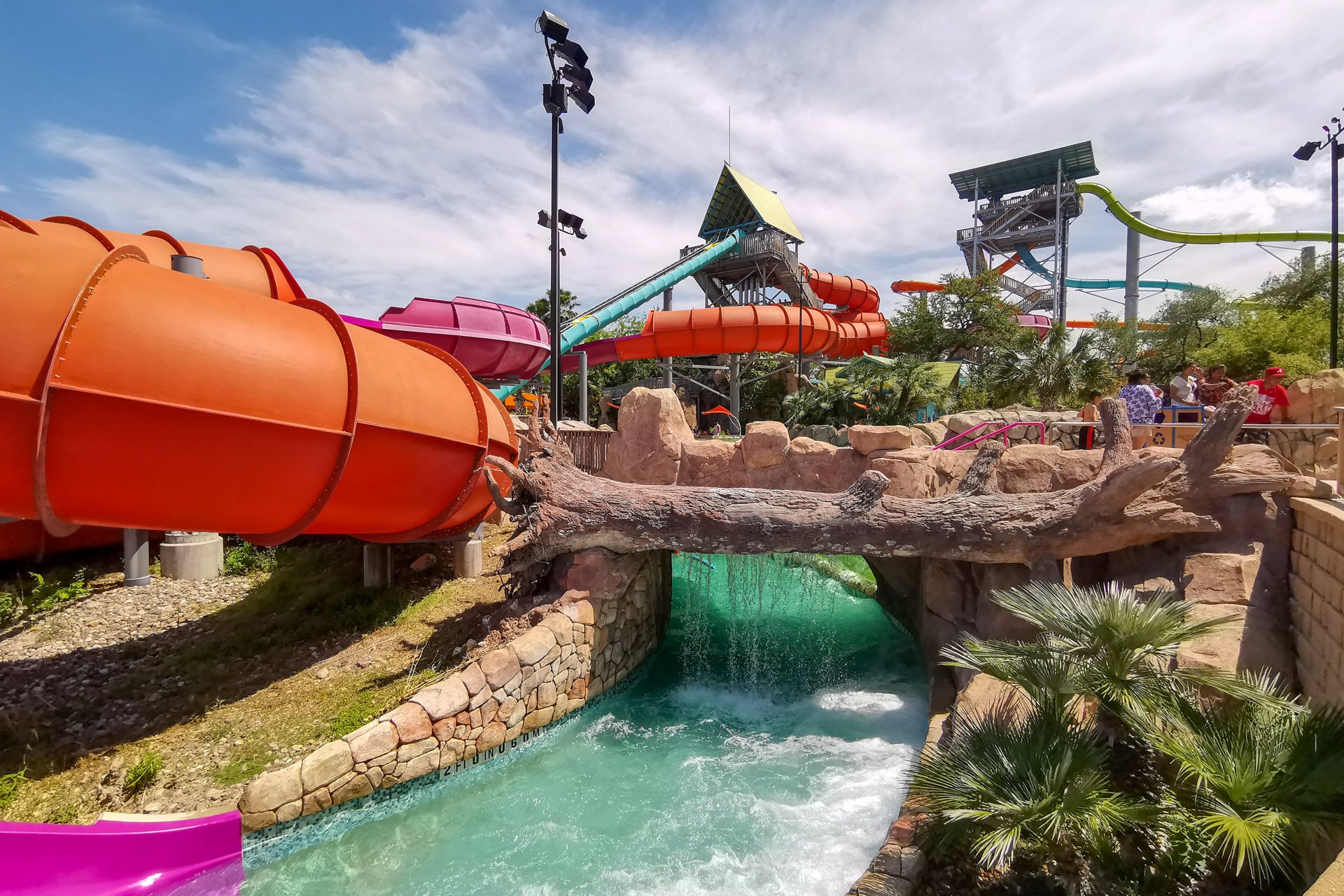 With the slide through the ray pool 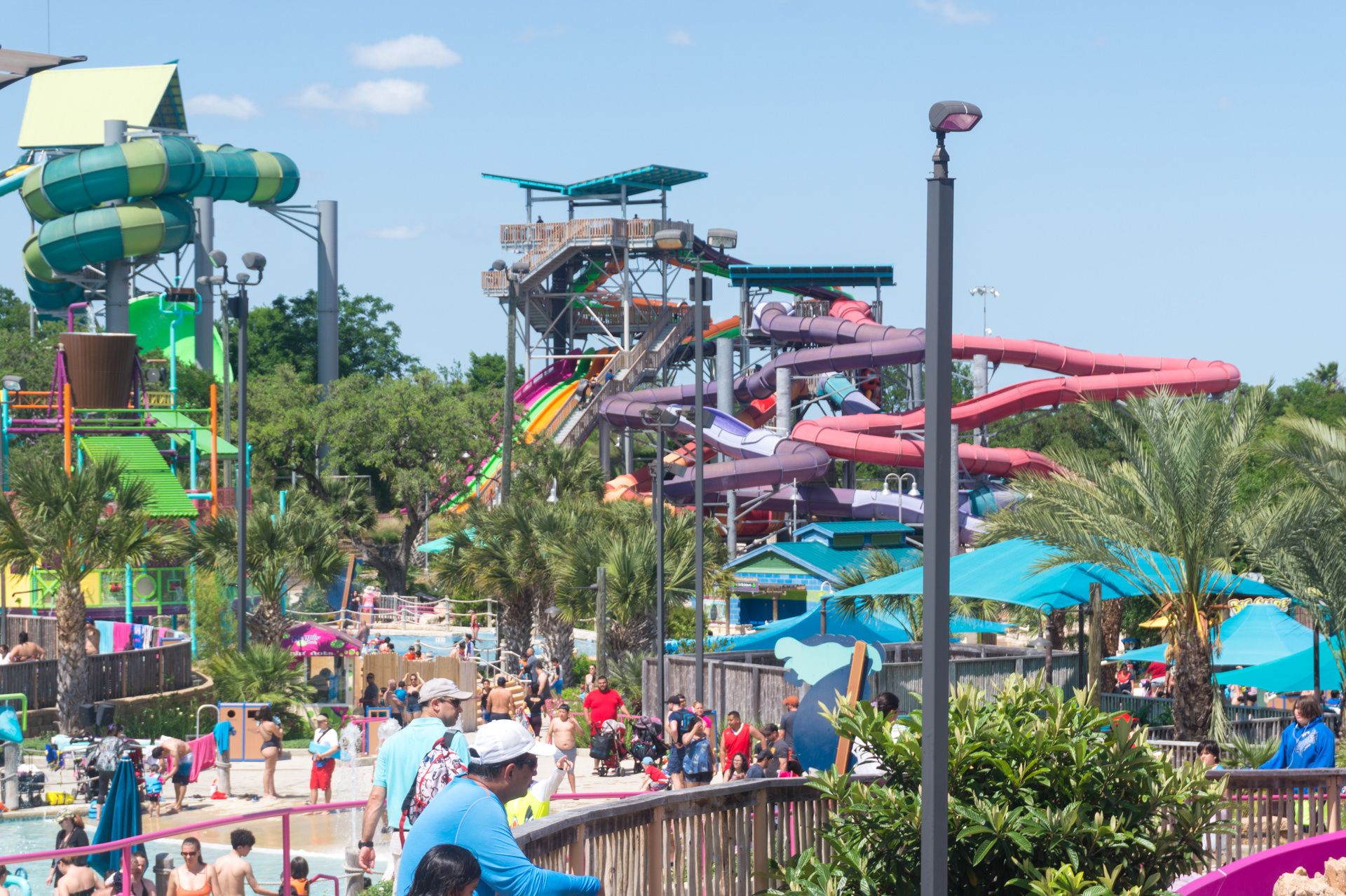 Great fun on the wave

Since I was relatively quickly done with the main park SeaWorld San Antonio, I went to the neighboring water park Aquatica San Antonio in the afternoon to bridge the time until the One Ocean show. Luckily, the combined entrance ticket was a bit cheaper than the regular entrance ticket for SeaWorld alone and the park was one of the few water parks in Texas that was actually open at Easter.

As early as in the entrance area of the park, opened in 2012, one notices that the atmosphere here is completely different from that of the park next door. Everything is colourful, beautifully designed and much more immersive. Right in front of one, the whole skyline spreads out and one straight gets the desire to climb one or the other slide tower and slide down one of the numerous slides.

Passing a big pool where numerous stingrays swim around, we immediately get to the first highlight of the park: Stingray Falls. The family raft slide offers a rather long slide over numerous curves and several smaller jumps, but is otherwise quite mild. After the obligatory passage through a flush of water and a water curtain, one then finds oneself in a small cave that is partly covered with acrylic glass. Here you have about 30s time to watch the rays above you before you reach the end of the slide. Thanks to this feature, Stingray Falls is a unique attraction and therefore you should definitely slide it once, although in my opinion the tunnel should be much longer.

Just behind Stingray Falls are the three turbo slides of Ihu’s Breakaway Falls. While the blue and orange tubes have a drop start, the green tube offers a classic entrance followed by a very steep descent before it turns into a curve dominated slide, as with the other tubes. As always with very high water slides, the tension increases with every vertical meter. Here in the Aquatica San Antonio even the use of swimming trunks that are too tight is prohibited, you would probably be too fast. At some point you reach the top and are spoilt for choice between the three lanes.

While both drop start lanes immediately change into a left turn and can show a longer straight after a short right bend, the green slide starts unbelievably fast into the action with a quite high drop. This is followed by a powerful downward helix, which changes into another high drop at the final. Meanwhile, the other two lanes also start their final spurt and after another pressure-packed left turn elegantly leads you into the exit.

The three lanes of Ihu’s Breakaway Falls are all really good slides, with the green lane definitely being the wildest of the three. If you like turbo slides, you’ll get your money’s worth here, because Texas highest water slide is really nothing for wimps and/or water park newbies and therefore a real test of courage!

After so much adrenaline it is worth taking a look at the Lazy River Loggerhead Lane. On the beautifully arranged Lazy River with its numerous water effects one can drift wonderfully before suddenly finding oneself in an aviary and watching numerous tropical birds. What a wonderful fun!

Close by is the entrance to the Kiwi Curl and Woohoo Falls slides, with the two tire slides of Woohoo Falls being replaced by the blackhole body slides Tonga Twister in 2020. Kiwi Curl are two classic bodyslides with multiple turns and drops, while Woohoo Falls has a very wide open tube slide and a black hole. Both slides are quite easy to ride.

Past the wave pool Big Surf Shores we go to the double tube slides Tassie’s Twisters and Hooroo Run. While Tassie’s Twisters are two classic bowl slides, at the ends of which you can do a few laps in a funnel before continuing on to the final pool, Hooroo Run is characterized by its descents and dark passages. Here the red track is only serpentine, while the purple track features additional helices.

Once across the game structure Walkabout Waters, where we refresh ourselves a little with the water from the huge overturning bucket, we go to the mat slide Taumata Racer. This six-lane slide not only has a huge capacity, but also offers a good opportunity to race against family and friends. The Taumata Racer is by no means a classic mat slide, because before the big shot starts, you first increase your speed in a powerful helix. Splendid!

Now let’s get to the last big slide in the park and my personal highlight: Walhalla Wave. As I was travelling alone and a group of three happened to need another person to slide, I was quickly able to take a seat in one of the boats that hold up to four people.  After a small slide in airy heights, a tight helix is added immediately before the big drop into the Tornado Wave is initiated. In this wave, one rushes rapidly upwards before drifting sideways and racing down. After two fast swings along the walls of the slide, you are slowed down slowly before you dive into a tunnel and are led leisurely to the end of the slide.

The Walhalla Wave is an absolutely magnificent slide, which for me also serves as a symbol for Aquatica San Antonio.

I was quite happy to have bought the combi-ticket, otherwise I would probably have been rather disappointed when leaving San Antonio. So the water park Aquatica San Antonio was my highlight of the day and one of the best water parks I have visited so far. There are some really good slides available and also the design of the park is very sublime, so I highly recommend a visit. Combining it with the main park right next door is also a good idea, as this way one can experience a lot of things throughout the day.

What is your opinion about the water park Aquatica San Antonio?  Just write it in the comment field below the report or visit our social media channels: