The Tier- und Freizeitpark Thüle in Friesoythe-Thüle near Cloppenburg in Lower Saxony is a medium-sized, family-run zoo and amusement park. With its animal park that is well worth seeing and its solid number of family-friendly rides, the amusement park is an ideal destination for the whole family. 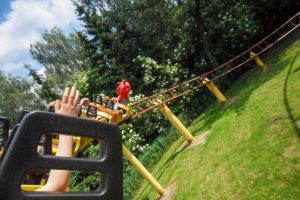 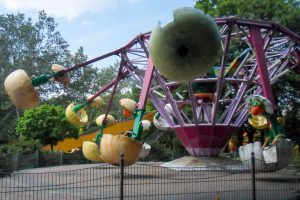 Up and down, again and again 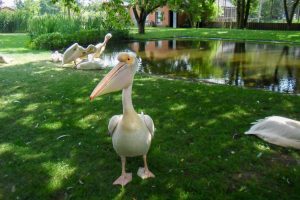 The zoo, which has existed since 1954, has managed to create a very well-functioning amusement park section through the additions of the last 20 years, which unfortunately robs the zoo of its visitors. While the amusement park part of the Tier- und Freizeitpark Thüle was very well received, I could hardly spot any other visitor on my tour through the zoo part. This is more than just a pity, because this area was probably subject to some extensive renovation works in the last years.

The amusement park part of the park has its origin with the many small rides made by the manufacturer Heege, which is why you can find the classics Luna Loop and Sky Diver among others. But also a very rare Heege ride pleases every roller coaster fan with good taste, because here you can’t ride a normal Butterfly, but the large version instead. This one is not only longer, higher and faster but also more powerful. A special feature of this ride is that you can ride it with open bars. But there are also new types of rides in the park.

For the Zierer friends among us you can ride the Kontiki Swing Boat as well as a Force Two roller coaster model. I never saw this layout before, so I was really looking forward to the ride on the Drachen-Achterbahn, which had a decent track length for a children’s roller coaster and some speed.

I did not test the Wiegand Bobkartbahn in the Tier- und Freizeitpark Thüle despite the appealing layout, because neither the queue nor the bobkarts moved significantly, even crept. Especially worth mentioning is the nearby Twist & Turn Storchenturm of the manufacturer Metallbau Emmeln, which offered a very good ride. Also the design of the ride catches the eye in a very positive way.

The Moser Tower Spring Ride Tower is similarly positive, but from the ride’s point of view it offers the worst possible ride for its passengers. Here, the kids stormed in without end, I myself left it at only one ride, as the tower braked rather unpleasantly, also the ride program was rather bad as mentioned above.

For the soakers among us there is unfortunately not much to see except a Nautic Jet and an dinghy slide, so that one could only advise the park to order a log flume, or at least another tube, this time however with a curve, for their dinghy slide. The family audience of the park would certainly appreciate it, especially with the temperatures last Sunday.

Beside the funny Technical Park Apollo 2000 Eiertanz, which in my opinion could have swung out even higher, you could also board a HUSS Airboat. This ride was not as bumpy as the ride from the Danish BonBon-Land, but it was still appropriate for the audience.

All in all, the Tier- und Freizeitpark Thüle offers something for the whole family. The rides are already fun to a certain extent and even the roller coaster fan is well served here, which is also due to the large shuttle coaster. The entrance fee is very fair and also includes the quite big zoo, which one should not miss.

What is your opinion about Tier- und Freizeitpark Thüle?  Just write it in the comment field below the report or visit our social media channels: