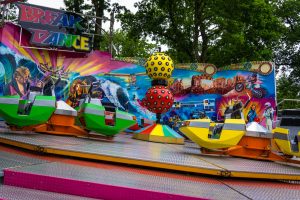 Drouwenerzand Attractiepark in Drouwen, Drenthe is a small all-inclusive theme park and holiday park for the whole family. The Attractiepark is home to a large variety of family-friendly rides. While the parents having a time off at the holiday park, the theme park is a very good place to keep the kids busy.

Fun Fact: The park is home to many prototypes of rides by KMG. Only here you can experience a Para Jump, as well as the XLR-8.

After visiting the Avonturenpark Hellendoorn and the Attractiepark Slagharen, slowly but surely a rather big hunger set in. The general food prices in Slagharen were quite high, so the route was aimed directly at the Drouwenerzand Attractiepark. In addition to the already reduced afternoon prices, the park attracts visitors with its inexpensive catering with Dutch specialities. As in the Wunderland Kalkar, the meals are included in the entrance fee, with the difference that here the infrastructure is also available and you don’t have to queue for hours for a small portion.

The actual theme park consists of two parts, separated by a bridge that connects the associated bungalow park with the reception. In the rear area you will find, among other things, a HUSS Break Dance, which unfortunately is very tame and had a less than great clearance, a ghost train slightly hidden behind it with a queue that hardly moves forward at all, a strange children’s carousel, a trampoline and a horse riding track.

In the front part of the park in Drouwenerzand Attractiepark, on the other hand, you will find most of the rides. In a very small space you can find a small park railway, as well as a small vintage car ride, but also classics like a boat swing, a Twister, a Kontiki, a bumper car or a wave flight. Friends of very interesting and strange rides will be well served with two unique products from KMG as well as a small rotating gondola roller coaster.

From the outside, the gondolas of the Jungle roller coaster very roughly resemble the chaises of Maurer Söhne, only with a much simpler technique on a round disc. The track of the Wild Twister ride built by Eos Rides on the other hand only describes a very simple double oval, which has a helix in the middle of the track, providing the only slope of the ride. The turns during the ride are rather slow, but the really interesting thing about the ride is the way the cars are locked towards the end.

A little more exciting and nerve-racking is XLR-8. This ride, designed and built by KMG, can basically only do what its name suggests, namely accelerate, and this in a rather fast way. However, the whole thing only becomes nerve-racking when you consider the disproportionately long travel time and the resulting queue times at this machine. Although you have understood what the device can do by the third time with maximum acceleration, sometimes from a standstill, sometimes while driving, these phases are repeated almost endlessly. The ride becomes so monotonous that one should not be surprised that the ride ends up stationary in a theme park. At the latest after the eighth acceleration phase it even becomes quite exhausting for the body and it feels like sitting a Fabbri Booster at top speed or in a Tivoli remix, after all you can hardly feel your legs and the field of vision slowly but surely becomes more and more restricted. Eventually you are finally released from your restraints; however, a repeat ride is not necessary.

More interesting, however, is the Para Jump, which can ideally be described as a windscreen wiper with rollover gondolas. You sit back to back in three gondolas of four people each. The gondola carrier performs the same movement as the other wipers of the manufacturer, but the passenger performs a back and forth movement, which is intensified by the rotation of the gondola itself. The rollovers result in a thoroughly fast and extremely funny ride, so that it is hard to imagine taking a ride on the only one of its kind.

The Drouwenerzand Attractiepark is a small but interesting amusement park which you should visit for its rare rides. The food included in the entrance fee is, in combination with the already low entrance fee, a nice extra that you should take advantage of.

What is your opinion of amusement park Drouwenerzand Attractiepark?  Just write it in the comment field below the report or visit our social media channels: