Schloss Beck is a small family-owned theme park for the whole family located in Feldhausen, North Rhine-Westfalia right next to the Movie Park Germany, one of Germany’s biggest amusement parks.

Although the park does not feature many amusement rides, it is clearly the better alternative for families with small children as all of their rides are family-friendly. On top, the park features a giant playground with a large number of unusual and historic playground rides right next to the park’s name-giving castle Schloss Beck. 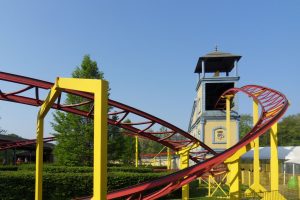 Right next to the Movie Park Germany  there is a small but very fine family park on the the grounds of the late-baroque summer palace Schloss Beck dating back to 1771. Over the time, the castle increasingly fell into disrepair until, in 1965, the Küchenmeister family bought the estate and subsequently renovated it. In order to cover the costs, some playground equipment was put into the garden, which still today accounts the largest part of the family leisure park.

Separated by a small river the park is splitted into two areas. On the main site of the amusement park you can find the castle Schloss Beck, various restaurants, a small electric horse rink, some historic carousels, a simulator, and the original playground with all its mechanical play equipment – all of which are very fun, but sometimes also quite bizarre.

On the other side of the river all of the larger rides are housed, as well as all of the self-operating rides by Heege. These small rides are basically mandatory for every park of this size in Germany and also tons of fun; luckily at Schloss Beck, these rides are free to use. Since the larger attractions opened a little later, the Luna Loop, Nautic Jet, the two slides, and the Sky Dive cable car were extensively tested. The dinghy slide – which is also manually started – which offers two different and quite wet slopes to the visitors, is particularly worth mentioning.

With the family roller coaster Familienachterbahn, the park offers a wild ride for its younger park guests since the year 1987. After a covered left turn and the lift hill, the layout features a steep turn followed by an incline to which a downward helix is added. Soon afterwards you cross the first drop in yet another turn to the right heading towards the station. The entire course, in the form of an eight, repeats itself several times before one can get off the train, which is designed after a ladybird. Interestingly, the prototype of this type of roller coaster, which has unfortunately been scrapped in the meantime, was standing in the neighbouring Traumlandpark on the site of today’s Movie Park Germany.

Despite the always present direct, but never truly continuous competition next door, Schloss Beck has managed to make a name for itself by focusing on families with smaller children. For many families the park is surely the better choice between the two Feldhausen amusement parks, after all the children can play in the park with ease without being exposed to too long queues.

What is your opinion about the amusement park Schloss Beck?  Just write it in the comment field below the report or visit our social media channels: