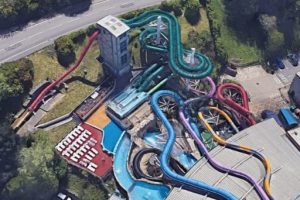 Close to the English coastal town of Bournemouth, in the Leisure Centre Tower Park near Poole is the Splashdown Poole water park. As one of the first attractions of the leisure centre built in 1989, the water park opened its doors in 1990 with a total of seven slides. Eight years later the Outside Screamer Tower with its three PPK Promoplast slides, for which the park is known in the slide community, was opened. More slides were added in 2002 and 2012. So far, no slide has left Splashdown Poole Water Park; however, there have been changes, more about this later.

By entering the bath, one is immediately surprised by its 90s charm. As one is right at the cash desk, it can happen that one has to wait in front of the bath even a little longer. At least that’s what happened in our group, when the chip bracelets refused to be activated and the poor cashier even went to the station of the unoccupied cash desk. Here we waited about 10 minutes before the bracelets could be handed over to us. In the changing area – which unfortunately has to be entered with street shoes, whereby one stands inevitably in a rather dirty broth – another little problem awaited us; because the lockers are unfortunately not opened with the bracelet but by key and require a pound coin as deposit. Actually, this is not a problem, but who really has coin money with him in a country where almost everything can be paid cashless? Thus, back to the cash desk and change some money. Shortly afterwards the fun could start.

Once you enter the pool, you are immediately at the stairs to the Black Thunder black hole slide and the Baron’s Revenge turbo slide, as well as the Mississippi Drifter tyre slide. The Black Hole slide is interesting because it is only in summer a stand-alone slide and is used without tyres; in winter it is the second part of the Mississippi Drifter. There was always a long queue here right from the start, which is why I did not test it. The situation was completely different on the Baron’s Revenge slide, which drops a good five metres to the ground in a steep turn on just nine sliding metres. This is extremely steep and despite the plump run-out it is highly brilliant.

One level higher you will find the access to the Crazy River Slide Mississippi Drifter, in which you move from basin to basin over several shots, before following the Grand Canyon to the outside, where you immediately fly off the tire. In the outdoor area of the Splashdown Poole water park you can now let yourself drift under the English sun, although this summer it rarely got warmer than 25°C before another slide follows. In a dark helix you quickly increase your speed. Towards the end of this section several water curtains are waiting for the slider and you get a bit out of balance, which makes it quite difficult to stay on the ring in the landing pool. A marvellous fun! A further drop later follows the transition to the inner area and immediately the end of this rather funny slide.

On the right-hand side of the pool, as seen from the entrance from the changing room area, are the stairways to the other slides in the indoor area. The back stairs are reserved for the three body slides Red River Roller, Zambezi Drop and Colorado Coaster. While the Colorado Coaster always had people queuing up, the other slides always had a very fast turn. While the Red River Roller is rather tame and can’t show any highlights, the Turbo Slide Zambezi Drop convinces after the first very leisurely turns by the constantly tighter turning steep curve towards the end of the slide, where you better shouldn’t underestimate the G-forces.

Even the rather leisurely looking Colorado Coaster is a big deal. After the first few shallow metres of track, in which several left and right turns alternate, a nice drop awaits you, after which the following turn is completed with a lot of rocking. Shortly afterwards, a brilliant final awaits you with a thoroughly pronounced double drop, which releases you from the slide with a broad grin.

The front staircase in Splashdown Poole leads you to the Space Bowl Infinity, as well as to the largest slide in the pool, the Dragon’s Lair. Past the children’s area of the pool, the path leads you to another staircase, at the end of which is the entrance to Dragon’s Lair. This staircase used to be much larger and the access to the water slide was correspondingly higher. Over a longer straight line, one increases constantly in speed on the slide before a rather high shot pulls one down. This is followed by several curves and narrow curve changes that consistently slow you down before you reach the end of the slide. Unfortunately, the long slide ride, especially thanks to the quality of the joints on it, is not really convincing. For the height of the layout, the ride is simply too slow and hardly gets going at all; a comparison to the original layout of the slide would be interesting in this case.

After I had tried my first funnel slide with plunging exit in the Joyful Waterpark of the Japanese amusement park Nagashima Spa Land, the tension regarding Infinity was much less, but the anticipation for the ride was much greater. The local funnel is completely enclosed and features different light and sound effects, which are played at the user’s choice. Nevertheless, the urge to repeat rides, away from the already long waiting times, was extremely limited, because you could feel every single joint in the funnel. Due to the plop run-out and the resulting drop manoeuvres, the slide is still a lot of fun and can be recommended; without it, however, it would have been just one slide.

Now let’s get to the outdoor area of Splashdown Poole, where we already got lost on the Mississippi Drifter and the Outdoor Screamer Tower with its three PPK Promoplast slides. These three slides were originally located at the Centre 2000 in Southampton before they were moved to Poole after the closure of the Leisure Centre. By taking advantage of the hillside location, however, the slide tower looks as if it had been intended from the outset. A steel staircase takes you up quickly with cold feet, where the entrances of the two tire slides Tennessee Twister and Louisiana Leap, as well as the two turbo slides The Screamer and Velocity are waiting.

The two parallel tyre slides Tennessee Twister and Louisiana Leap are the first of these. With a small jumpstart you quickly build up speed and then slide along the curves of a horizontal figure eight. On the second diagonally running track, another jump awaits the slide, whereupon the final right-hand bend follows in a sweeping manner. Over a final shot, you are then released into the run-out pool, where you more or less elegantly separate from your tire. In fact, both slides are unexpectedly leisurely and offer quite nice airtime moments, but nothing more.

The green turbo slide The Screamer, which also came from PPK Promoplast, is also unexpectedly leisurely on its way. Fans of the former Grüner Hai slide of the Miramar Weinheim might be disappointed to find only a rather solid turbo slide here, due to the missing bend in the slide’s course and the absurdly wild swinging section afterwards. There is absolutely no reason to complain, as the slide fits perfectly into the large turbo slide portfolio of the Splashdown Poole Water Park.

The highlight of the tower, however, is the Velocity turbo slide built in 2012. Compared to its PPK sibling, this slide really does have a bend in its appearance, in fact, it has a double bend. The slide starts with a very steep shot, which shortly after turns into a more leisurely ascent. Mercilessly a short left bend follows, whereupon the landing pool is reached and first of all a gush of water is carried out of the slide. What an awesome slide! Velocity does what it promises and so you rush down this short slide in a speed rush.

Splashdown Poole is a solid water park, but its interior has clearly aged. The water slides stand out from the crowd for the most part and, except for the joints of individual slides, are absolutely convincing. We ourselves were lucky to have passed by at a favourable time, as the pool became more and more crowded towards the end of our visit. But as it is the case in every water park, the question is if one wants to wait so long for a slide, specially as the entrance fee is comparatively high; at least compared to the German pools. A visit is worthwhile in any case and can be perfectly combined with a visit to the picturesque city of Bournemouth.

What is your opinion about the water park Splashdown Poole?  Just write it in the comment field below the report or visit our social media channels: