Legoland Windsor, near the English capital London, is currently the most visited theme park in Great Britain. The theme park belonging to the Merlin Entertainments Group offers a large number of family-friendly rides, all of which look a little like they were assembled with Lego.

Due to its special hillside location the park offers a very interesting layout, which is perfectly used by the rides, as well as all other attractions, such as the Miniland.

Fun Fact #1: The Legoland Windsor was built on the grounds of the Windsor Safari Park.

Fun Fact #2: Legoland Windsor is the second Legoland that was operated by Lego itself. In Sieksdorf in Holstein, Germany there was another Legoland even before.

Fun Fact #3: From Legoland Windsor one has an excellent view to Windsor Castle. 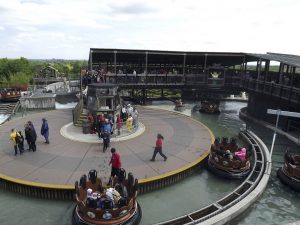 After Alton Towers, Legoland Windsor is the most popular amusement park of the Merlin Entertainments Group in Great Britain, so you should always expect longer queues at this park. Its location on a hill overlooking Windsor Castle in the distance gives the park a remarkable appeal.

From up here several paths wind their way down, which, similar to the Tolk-Schau theme park, even offer slides down. The most interesting way to descend or rather to conquer the mountain without any effort is to take the funicular Hill Train, from where you have a good view onto the Vikings River Splash rafting ride.

Due to its canal, this ride is certainly not a beauty, but the view from the lower levels of the park is something very special, as rafting boats that float many metres above one are usually not an every day sight. The ride also seemed to be very wet, a thing that even in England is a miracle on a ride of this kind.

If you follow the way down from the rafting, you will pass a labyrinth and Zierer Kontiki and reach the pirate theme area of the park, where an old acquaintance from the German Heide-Park is making his swings. In addition to the HUSS Pirate Jolly Rocker, you can ride a teacup ride, the log flume Pirate Falls Dynamite Drench. Furthermore, there are generously designed play facilities for the younger guests.

If you’re looking for Adrealin, at least a little bit, you’ll find it in Knight’s Kingdom, as here you’ll find the two roller coasters Dragon and Dragon’s Apprentice next to the quite popular torture machine Knight’s Quest, – a rather uncomfortable Old Train by the company Mack Rides. While the second one is a nice children’s roller coaster with a downward helix and slight turns, the Dragon is a rather strange and interesting family roller coaster. Like many other rides of this Legoland Windsor, both coasters were built by the English company WGH Transportation.

The Dragon reminds a little bit of Lightwater Valley’s legendary roller coaster The Ultimate, but without wanting to reach the height or the length of the ride. The Dragon starts with a dark ride section, which is well-known from the other Dragon coasters by Legoland. Towards the end of the ride, the ride goes without a rapid fall or launch towards the lifthill. The lifthill is not very quiet because of the metal plates at the catwalk and offers unnecessarily a curvy course. The first drop is followed by a figure of eight until you cross under the first lifthill in a second curvy lift and gain some more height. With the collected energy you now pass through a tunnel and complete another course of a figure of eight. The brake section consists of friction wheels, which were installed once again on a curvy hill.

If you follow the paths, the Egyptian themed area Kingdom of the Pharaohs will offer you another highlight with the Laser Raiders, for which you are welcome to queue a little longer. As much as I would have liked to test the ride from Sally, the time I had left in the park went by very fast. Due to the general traffic around London that day, as well as the big rush at Legoland Windsor, I could only visit the two roller coasters, the Miniland, the Hill Train and the new 4D movie.

The unique rides of Legoland Windsor

Apart from the usual Legoland repertoire, you can discover some special features at Legoland Windsor. In the Digger Challenge, for example, you can steer a real earthmover, move or turn your helicopter up and down on a stick at Duplo Valley Airport, slide down a winding track with the Raft River Racer in a rubber dinghy, drive past well-animated Lego models in the Fairytale Brook fairytale ride or ride through a Sealife Center in Atlantis Submarine Voyage in small submarines.

While the children can get soaked in the Duplo water area, the adults can have a look at Lego models in Miniland. This is quite nice and has models from the United Kingdom, France and the Netherlands. Star Wars models will not be found in this part of the park, fortunately they have their own exhibition near the entrance.

In the park’s 4-D cinema, in addition to an agent film, a film exclusively new product series The Legends of Chima by the Lego company is shown. Since Lego has already shown how to animate correctly with their series, I was quite curious about this film, even though I didn’t know much about the subject matter and a Ninjago film would have been more appealing. The animations were very clean and the 3D effect was actually as clear as I have never seen it in any other cinema before. The other effects were all well adapted to the movie, so that you should definitely watch it, as long as you can get along with larger amounts of water and are not necessarily averse to the animated film as a genre.

The Legoland Windsor is a park, which surprised me very much. Due to its location in a valley, this park offers unusual views and still knows how to use it for you. Everything seems to be harmoniously coordinated, even if a little more densely built than in other comparable parks. Smaller children up to a certain minimum age have all kinds of opportunities to let off steam here, which is also generously accepted.

What is your opinion about Legoland Windsor?  Just write it in the comment field below the report or visit our social media channels: