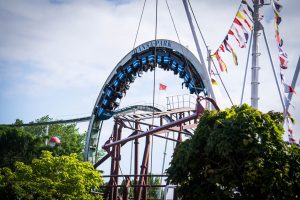 Hansa Park in Sierksdorf, Schleswig-Holstein, is Germany’s only theme park by the sea. The family run amusement park at the Baltic Sea offers a large number of family-friendly rides and breathtaking roller coasters. With the Schwur des Kärnan at the latest, it established itself as one of the most innovative amusement parks in Europe.

But those who think that the rides are all too wild will still get their money’s worth in Hansa Park. Apart from a really beautiful park landscape, the amusement park convinces above all with its extremely inexpensive gastronomy, whose price-performance ratio can hardly be beaten. 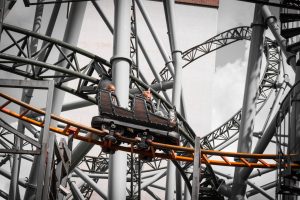 Fun Fact #1: The park originally opened as the first Legoland outside Billund. After only a few years the park was sold and renamed Hansa-Land.

Fun Fact #2: For the 2017 season the backward fall on the roller coaster Kärnan has been significantly intensified. For this purpose the retractable brake swords were removed in the upper part of the braking track, so that it was now shortened and you can stop directly in the lower holding brake. So you not only fall faster and further, but also brake shorter and harder.

The Superrollercoaster Nessie is one of the most famous roller coasters in Germany. This Schwarzkopf looping coaster was the first stationary roller coaster featuring a vertical loop and is more or less a product of its time. Once the definition of a thrill coaster, it later became a beloved family coaster and the first roller coaster to go upside down for many growing up nearby the Baltic sea. It has been a very fine roller coaster for the past 38 years, but starting from this year it just got better.

During the past decade Hansa Park was working hard to get rid of its late 70s look and became a very Hanseatic theme park. After most of the facades were finally transformed, the park decided to expand its overall theme and added Britain as the first trade partner to the park. Hence, Nessie got a theme and moved back to its home in Scotland. The new station building looks amazing and due to the location of the new entrance, the ride regained a lot of its former popularity. Well done, Hansa Park!

Another addition for this year is the drop tower Highlander, the tallest one of its kind. Built by the Austrian company Funtime, the ride offers a new way to enjoy the view onto the Baltic Sea and the surroundings, as well as the already proven drop experiences known from various German funfairs and other theme parks worldwide – currently, there are two options: a non-tilting one in the morning and a tilting one in the afternoon. I don’t particularly understand why they wanted to introduce two options, as the drop in the tilted position just enhances the overall experience without increasing the fear factor. Many visitors would not even notice it when looking at the ride. Needless to say, the Highlander became a hit among visitors during its first year of operation.

Personally, I don’t rank the Highlander as high as others. Compared to other installations of the manufacturer, it has some flaws. Yes, it might be the tallest one of its kind, but it lacks the thrills and the capacity of Donjon de l’Extrême at Nigloland. At least, the ride is far better than the Power Tower Montezuma, which used to stand at the park till the year 2012.

What is your opinion about Nessie and the Highlander?  Just write it in the comment field below the review or visit our social media channels:

Actually, one should only be able to tell very little about the history of a newly built roller coaster. With the roller coaster Der kleine Zar it’s different, because apart from the background story assigned to it, there was a background story of its own regarding the production, so the ride could only be built this year and not as planned last year. The standard model of the Italian manufacturer Preston & Barbieri, which already makes its rounds in the Swedish amusement park Liseberg, did not meet the latest standards and could therefore not be approved in Germany. Corresponding adjustments to the small roller coaster took a little longer than expected, so that the construction site, which had already been prepared, was temporarily filled with two children’s rides. At the beginning of the season the ride opened without further problems.

The ride on the Der kleine Zar begins with the exit from the curved station into the lift hill of the ride. Arrived at the top, a little dip follows, whereupon the fast downward helix joins. In the valley, the youngsters then experience wonderfully pronounced forces before a small hill follows. After that the station is reached immediately and three more laps follow.

Der kleine Zar is an utterly nice roller coaster for the youngest guests of Hansa Park and/or for the park guests for whom the other roller coasters are still too scary. The ride can definitely be described as fast, as the acceleration is quite pronounced and offers a great alternation.

As a second and originally planned novelty for this year, the Gerstlauer Sky Fly ride Kärnapulten opened shortly after the start of the season. The classic among the semi-automatic carousels is also presented in a stylish outfit, but the ride cannot be compared to the other rides of this kind. While there, with a little practice, a high number of rollovers is possible on selected places, here it is a miracle to get a rotation at all; thus, one does not offer the proven ride pleasure for Sky-Fly veterans, for all other passengers it remains the same, of course. The reason for this is the big tower of the roller coaster Kärnan, which has a noticeable influence on the ride dynamics.

What is your opinion about the Sky Fly Kärnapulten and the children’s roller coaster Der kleine Zar at Hansa Park? Just write them in the comment field below the report or visit our social media channels: