Four years have passed since the last half-finished roller coaster, the Schlange von Midgard, was opened at Hansa Park, four long years in which surprisingly little has changed at the park, except for the demolition of the vertical ride prototype by Maurer Söhne. In the course of financing the planning and realisation of this year’s project understandable, on the other hand the time could have been used for a renewal of the existing installations, or at least try to reduce the number of parents pushing in front of the above mentioned children’s roller coaster. But when Hansa Park published the plan to build a Hyper Coaster, I had high hopes that the park would follow the example of the English amusement park Pleasure Beach Blackpool, which is also located at the sea and has a very limited area at its disposal. As a big fan of the Big One, at least an almost two-kilometer long roller coaster by Chance Morgan or similar, which runs through the whole park, would be a reason to visit Hansa Park more often. Instead, the project suddenly became uninteresting by announcing a roller coaster with a vertical lift in a tower and a role as an inversion figure, as the roller coaster Der Schwur des Kärnan could now be classified as Fluch des Novgorod II.

The construction progressed and the bloody ugly concrete block, which you can probably still see in the next few years, grew in height. Some externally visible distance meters followed, but the interest was in other projects. At the beginning of this month the opening of the now third roller coaster from Gerstlauer followed, and of course, as it should be, it was half finished. Despite this, the Schwur des Kärnan was able to win the favour of its riders quite fast, because Kärnan is a lot of things, but above all it is mega extreme, powerful, super smooth and, so on and so on.

In Hansa Park, The Schwur des Kärnan is only negatively noticeable during the transition to the Spanische Glocke and the Rio Dorado, as the access to both rides seems to be slightly hidden now, otherwise, the tower is indeed unsightly but impressive. The flat layout above the meadow in front of the Barracuda Slide is quite respectable and because of the almost non-existent running noises of the cars one hardly notices how fast the trains are actually running here.

The queue generally seems very provisional, but offers a lot of potential due to the existing quite large rooms in the building. The baggage drop is the same as on the roller coaster Blue Fire from the Europa Park near Rust, but in a separate room. After that one enters the queuing area, where the four rows of four people each have to be filled. The gates are a little bit pulled forward and open synchronously to one of the doors behind which rows 1 – 4 are located. By chance the train is filled row by row, a very interesting and praiseworthy idea, which can be adopted by other amusement parks.

The ride on the Schwur des Kärnan begins with a small gradient, followed by a left-hand bend, sloping outwards. Before the vertical lift, the train waits for a short time until the preceding train has left it. As usual, the train goes uphill quickly, before it makes a stop shortly before the end of the vertical lift. The train is held in position while the driver of the chain is moved into position. Shortly afterwards the brake is released and as it must come, the train falls down backwards. By using brake swords at the lower end of the freefall section integrated in the lift, the magnetic brakes react and the speed of the train is reduced. Mechanical brakes stop the train completely, the chain engages once more and carries the train over the top of the lift.

In a vertical gradient with an additional turn of 90°, one now leaves the building, whereupon a section of track, which is reminiscent of a heart, appears on the outside. Basically, one performs a Non Inverting Butterfly, whereby the lateral inclinations of the track are skilfully interrupted by the horizontal crests. With renewed momentum, the track turns into a slightly higher banked right turn, where the first turn takes place. A small hill in the manner of a Bavarian curve initiates the second turn. Very close to the ground you make a wide right turn, followed by a nice zigzag combination leading slightly upwards. In another right turn you approach an Airtime hill, where you also take off wonderfully. Another generously designed Bavarian curve leads into the last curve combination on the way back to the station. A small hill later the brakes are taken and the ride seems to be over for the time being.

The gate opens and an inversion, which is very reminiscent of the last role of the smiler from the English amusement park Alton Towers, comes to light. Thanks to the almost non-existent speed, one drives through it with a decent hangtime. A last right turn with a small dip before the station brake follows, and strangely enough, this is the first place where the pictures are taken.

The Schwur des Kärnan is a thoroughly nice roller coaster, but definitely not the best roller coaster in Germany, nor is it the most intense roller coaster in this country. The backwards freefall is a nice feature, which, if you were the park, you would have to advertise great, as well as the whole ride. However, this element is at the same time very capacity-reducing and actually unnecessary for the overall experience. The real drop on the other hand is absolutely brilliant and the heart element is also convincing. During the following part of the track, which is close to the ground, one quickly loses the overview and except for the hill and the subsequent meters, it hardly remained in my memory. The part at the end is quite good, except that a ride like this doesn’t really need it.  The smoothness during the ride corresponds to the typical ride behaviour of the manufacturer and is quite good for a roller coaster of this height, but far away from smooth. 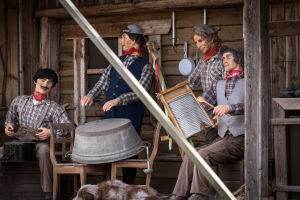 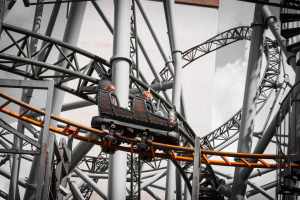 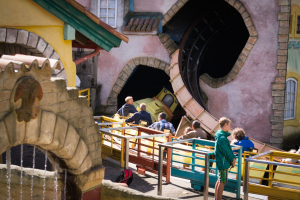 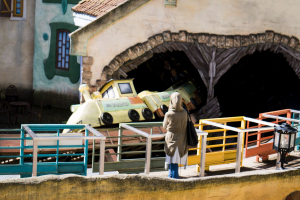 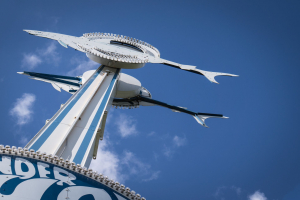 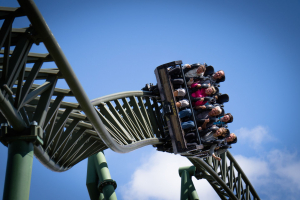 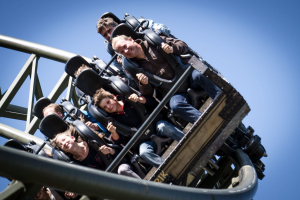 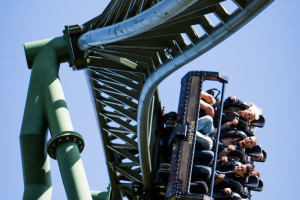 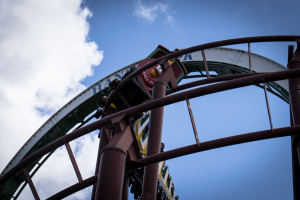 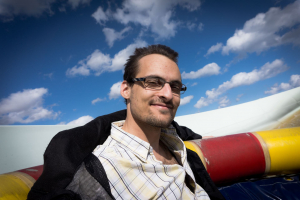 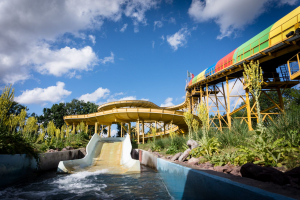 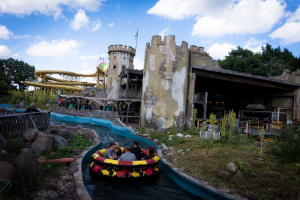 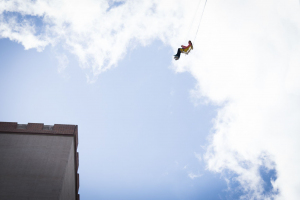 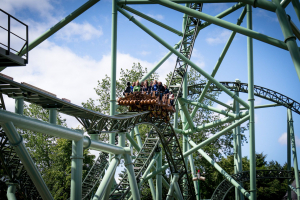 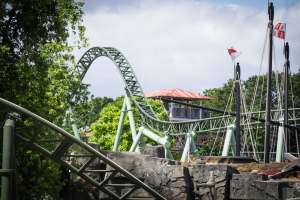 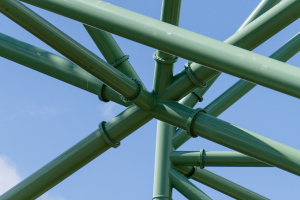 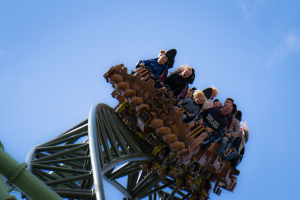 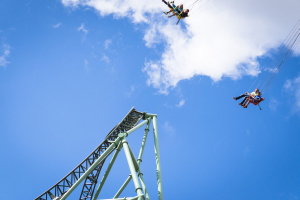 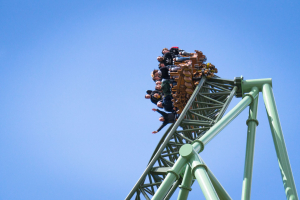 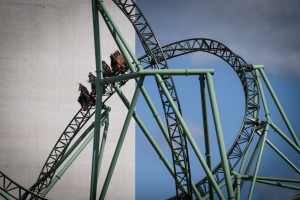 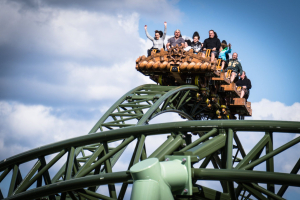 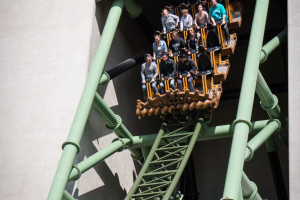 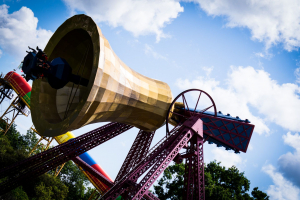 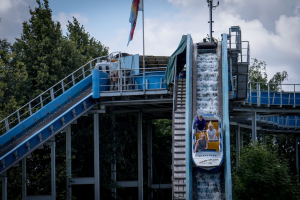 One thing is completely incomprehensible to me, as why does one open a half-finished roller coaster for the third time in a row at the beginning of the main season? Even The Smiler, a roller coaster that was affected by breakdowns and a very hard winter, opened in the off-season, whereas other half-finished coasters like the Sky Scream from the Holiday Park even opened at the beginning of the season, whereupon they were even finished during the season, at least externally. I understand if you don’t want to take an example from your closest competitor, but in the Lüneburg heath, roller coasters are now finished the season before, tested in time and opened on time. The Schwur des Kärnan at least would be better off with a finished design, because although it is a lot of fun, it is not really earth-shattering.

What is your opinion about the Infinity Coaster Schwur des Kärnan at Hansa Park? Just write it in the comment field below the report or in our social media channels: