The Ski- und Rodelarena Wasserkuppe is a small excursion destination on the Wasserkuppe in Hesse and home to the 1470m-long Alpine Coaster Rhönbob and other attractions from the manufacturer Wiegand. The Alpine Coaster has an altitude difference of 105m and offers an extremely varied track with a multitude of jumps, waves and other fun elements on its 1km long downhill run. 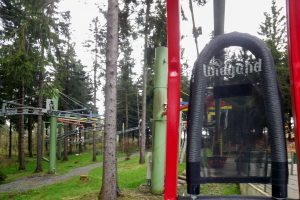 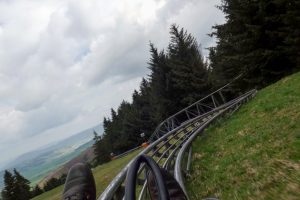 The Ski- und Rodelarena Wasserkuppe near Gersfeld is owned by the Wiegand family and, in addition to the prototype of the Alpine Coaster, offers two summer toboggan runs, a high ropes course and the Wie-Li transport cableway as well as another variant of the Wie-Hex, in which the course is not done in a lying position as in the Erlebniswelt Seilbahnen Thale, but rather resembles a small suspended coaster.

The ride on the Hexenbesen begins right after you have inserted the 2€ for the ride or scanned your card, with a small predrop into the lifthill. The first curves follow in which one swings out a little before it goes up a further lift hill, whereby the gondola swings a little strangely up and down. After two further curves the third lift hill is reached before the gondola goes up a small curve combination towards the end of the ride.

After the obligatory programme has been completed, the highlight of the Ski- und Rodelarena Wasserkuppe follows, which can at best be described as Lightwater Valleys The Ultimate among the Alpine Coasters: The Rhönbob. Although its age and the status of the prototype, this is also due to trees falling onto the track from time to time, so that a consistent rattling could develop and a wildness that one looks for in vain on new-fangled Alpine Coasters. Despite its length of almost one kilometre, the track is driven through quite fast, which cannot be reduced so quickly even by the interesting braking system of the bobsleds. At the latest after crossing the Wie-Lis the wild part of the ride follows and thus one tight curve after the other until you leave the forest and enter the jumps. Shortly before the end of the ride there is a small jump, followed by a big jump and a tight right turn after which you descend at insane speed. Afterwards the unsuspecting passenger is released with a big grin in the direction of the lift.

The Rhönbob of the Ski- und Rodelarena Wasserkuppe surprised me very much, whereupon I immediately had to take a second ride to make sure what I had just experienced. It is definitely one of the better and wilder rides and should be ridden without question despite its sometimes unusual and quite brute riding style.

What is your opinion about the Wiegand Alpine Coaster Rhönbob and the other attractions of the Ski- und Rodelarena Wasserkuppe?  Just write it in the comment field below the report or visit our social media channels: