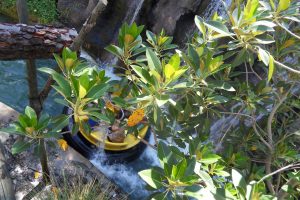 Isla Mágica located in the city of Sevilla in Andalusia is one of the largest theme parks in Spain. Opened in 1997 on the grounds of the former World Exposition, Isla Mágica offers its guests a small selection of amusement rides and shows in a beautifully arranged landscape. It is the perfect place for everyone who enjoys good shows and great theming. The SLC with the Bonus-Helix Located in the centre of the city of Seville, on a large part of the former 1992 World Exposition site, is the Isla Mágica theme park. This park, existing since 1997, offers a few rides, but a lot of shows, food stalls and a lot of vegetation combined with many thematic elements.

The first impression you get in this park is quite positive, but this changes relatively quickly when you take a closer look at the park’s manageable rides portfolio.

The park itself is built around a lake, on which there are two attractions, a boat ride and a self-built splash battle, probably one of the newer rides in the park. Similarly cheap is the boat swing, which was apparently lovelessly smacked onto the lake.

The first big attraction you will come across is the log flume Anaconda from Mack Rides. It has three shots of not exactly low altitude and has been wonderfully integrated with the park area and the waiting areas of the log flume. The wetness level seemed to be quite dry from the outside, we unfortunately did without a ride at the beginning of the day, a few hours later we stood here for half an eternity.

A few metres further on you will find the park’s first roller coaster, the Tren de Potosi. This roller coaster of the company C&S is quite close to a Big Apple, but has a downward helix after the, here at least, funny hills. The ride itself is a lot of fun and is not only an enrichment for the small kids.

It takes quite a long walk until you reach the next attraction, the more disappointed you are that the Llamas are only allowed to be ridden by children, after all, this ride is quite original for an electronic horse track.

Right next to it, you will find Iguazú, a spillwater of Intamin, which makes very good use of its surroundings, but does absolutely nothing at all. From the water, which the boat (by the way the same construction as already known from the Parque de Atracciones de Madrid) diverts to the side, you will only get drops inside the boat.

Located in a dead-end street you can ride the second roller coaster of the park. The ride, named Jaguar, has not only a surprisingly open area below the roller coaster, but also the latest generation of trains by Vekoma. Although the ride is absolutely no good and the bonus helix just deserves the label “nice”, the train is simply ingenious. It is not only absolutely comfortable, but can also keep its head from all side blows thanks to the new brackets. The waistcoats themselves are a little more comfortable than on the MK1200 trains, as used for example in Gardaland and Walibi Holland. At least the trains are a worthwhile investment for any reasonable park, only here in Isla Mágica they are a complete waste.

Passing the tea cups, we go to some ugly concrete buildings that date back to 1992. In the basement of one of the buildings is the pirate darkride Capitán Balas. This is an interactive ride by Mack, which can also be found in a similar form in the Avonturenpark Hellendoorn. The scenes themselves are beautiful and detailed, moreover, you can get your inmates wet at the right moment, unfortunately only yourself at the wrong moment.

Back out of this concrete complex, where there are also two cinemas, we now enter an area where the vegetation seems to have taken over. Here you will find the Rapidos del Orinoco, the last major attraction of the park and one of the most beautiful rapid rides in Europe. The beauty of the park is not necessarily wet, as is often the case in Europe, despite the waterfalls that are still sticking out into the boat. The curve around the wave flyer is particularly worth mentioning.

Apart from a children’s land, a merry-go-round and the Power Tower El Desafío by Maurer Söhne – which has different programmes running at different times, but even in the most intensive version can do less than the prototype in Hansa-Park -, as well as the beautiful Giant Disk’o Ciklón by Zamperla, there is basically nothing left here. The only, more or less, traditional dark ride of the park has been replaced by a Maze that costs 5€ entrance fee and is probably not worth the extra charge, even if you get a voucher at the park entrance.

For those who love a theme park for its shows and theming, Isla Mágica is certainly a really good and successful park. For all the other park guests the offer of the park is simply too low and the price compared to the other Spanish parks is simply too high, even though you don’t even have to pay the full entrance fee until the age of 25. In my ranking of the worst amusement parks Jaderpark was knocked from its throne, because I don’t want to go here a second time voluntarily.

What is your opinion about the Spanish theme park Isla Mágica? Just write it here below the report in the comment field or visit or our social media channels: