Rodel- und Freizeitparadies St.Englmar in Bavaria is a small excursion destination in the middle of the Bavarian Forest and home of the 1210m long Alpine Coaster Bayerwald-Coaster of the manufacturer Wiegand, which has a height difference of 60m. Despite the very serpentine layout, the course features a variety of jumps, waves and other fun elements that guarantee a varied and exciting ride on the 890m long downhill run. 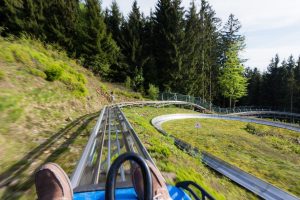 Due to the omission of the first waypoints we had more time than planned before, but our mobile phones could not use their full potential to plan further destinations due to the sometimes rather bad connection, so that the mountainman had to rush to our help. Due to the hero of Andreas Gabalier’s song, respectively his name idol Julian Bergemann, we quickly added the Rodel- und Freizeitparadies St.Englmar to our list, but due to another round on the Monte Coaster at Monte Kaolino the time was already very limited.

Luckily, the Rodel- und Freizeitparadies St.Englmar didn’t finish at 6 p.m. and was still relatively well attended, so that a ride on the Alpine Coaster Bayerwald Coaster could still be done.

The layout of the ride, which looks very serpentine from the outside, does not seem to be very exhilarating at first sight, but the ride builds up speed relatively fast. Thanks to several fast curve changes, the ride always feels fast before the big jump starts. One roundabout later, several smaller waves follow in wide curves before the ride comes to an end.

The Bayerwald Coaster was the last Wiegand ride of the day and a very entertaining one as well. A visit to the Egidi-Buckel in the near future will be worthwhile because next year the Rodel- und Freizeitparadies St.Englmar will be extended by a roller coaster made by Zierer.

What is your opinion about the Wiegand Alpine Coaster Bayerwald Coaster in the small amusement park Rodel- und Freizeitparadies St.Englmar?  Just write it in the comment field below the report or visit our social media channels: