Holiday Park in Haßloch, Rhineland-Palatinate, is one of the most interesting amusement parks in Germany. Although the park is not too large, its large number of German and European premieres makes it one of the most innovative amusement parks in Europe. Since the takeover by the Belgian Studio 100 Group, however, the focus has increasingly been on expanding the amusement park’s family-friendly offering. As a result, there are now significantly more rides in the park, all of which have been designed with great attention to detail. 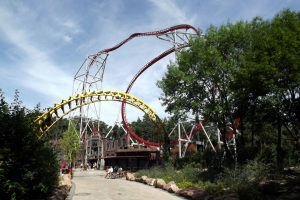 If the day begins suboptimally it can only be good, at least that’s what I thought when I woke up early in the morning at Jan’s home in Weiterstadt, saw my glasses in pieces and spontaneously had to plan a visit to Fielmann in Haßloch. On the way we picked up Martin, so we got there on time and after about ten minutes of waiting we could take the way to the neighbouring Holiday Park. Despite these circumstances we waited super punctual on the forecourt for the others and then awaited the opening of the roller coaster Sky Scream together with them.

As I myself was not in possession of a valid season ticket, I joined the queue and waited surprisingly long. Since Julian now also joined the group and made significantly faster progress in the line next to mine, I joined him in order to extend the queue with a funny action by using our Fort Fun season tickets. Since the group was still not complete we decided to repeat the whole game with Jan’s annual ticket at another ticket office, after all, a ticket was still missing. Last but not least Martin surprised us with an expired season ticket, which blocked his entrance and led to some nice hours in the season ticket queue, while we enjoyed ourselves in the park.

Meanwhile it was already clearly after 10 o’clock and thus our lively troop with the urge to ride something moved into the Majaland to pay a visit to the Blütensplash. Well entertained, a little wet and with a kitschy children’s song in our ears, we were now attracted to the actual reason for the visit, as a high structure surrounded by a lot of naked concrete radiated a certain end-time mood from which we did not want to resist.

An old, dirty Vekoma track showed us the way to the roller coaster Sky Scream and shortly after we made ourselves comfortable between the concrete walls. Up and down a short steel staircase we waited now with a little more people on the way up to the station. Certainly most of the people willing to ride waited there and due to the narrowness of the station there was also a little chaos, because although the first row obviously had the most people, some of the other rows had a much longer wait. Especially when the station is a bit narrower, it would have been useful to set up a turnstile and let a maximum of 2-3 car loads into it. Certainly the Holiday Park is seldom as full as on the day of the visit, but a little more order could lead to more rides, which I actually regretted by a small mistake towards the end of the day, when all the others rode three laps in a row.

Finally taken a seat in the, at least in the last rows very narrowly laid out, cars of the roller coaster Sky Scream and pushed down the unfavourably shaped bar, the ride could begin. The first launch resembles in large parts the initial acceleration of a boat swing. After the change of the running direction the ride is much more powerful and so you almost reach the apex of the Non-Inverted Looping, from there you have a wonderful view to the Wild Mouse roller coaster and other areas of the park. With a lot of momentum you accelerate a third time and after a 180° turn around the axis of the track you reach the uppermost level without any effort, where you are torn out of your seat. After a very short breather, the immense airtime is followed by a strong hangtime in a roll that could not be placed better. Now follows the immersion into the Non-Inverted Loop, where you are physically stressed, especially in the rear part of the train. The rotation around the axis of the rail is so brutal that you hardly notice the following valley. Another reunion with the apex of the element initiates the final of the ride, whereupon you come to a precise stop in the station after another ride through it.

The Sky Scream is a truly outstanding ride – it does what the Superwirbel hasn’t been able to do for years, if the ride was running at all, and that is to be a noteworthy internal competition to the Expedition GeForce. It draws people away from the park’s everlasting main attraction. Although the ride built by Premier Rides is not the best German roller coaster novelty this year, which is without question the Flug der Dämonen in the Lueneburg Heath due to its rounder overall package, it is definitely one of the better roller coasters in the country. Holiday Park has done everything right by its risky choice.

An attempt to get a backwards ride on the Palatine Lighthouse Tower by intensive rocking later our group increased to its full bloom. Martin’s request to get something to eat was skillfully ignored and accordingly the Expedition GeForce was given its long-awaited tribute. Since the ride has always been going well, another ride followed later in the day, but this time in the first row of the train. Interestingly enough, we then rode in the same trains as the group members who had broken away since the water ski show and had been waiting much longer for the last row of the train.

In the Pfalzgraf we tried out the entire range of products on offer, in my case it was a well cooked, but unfortunately quite sweet goulash of inferior quality. For the high costs one can actually expect something better, especially since the drinks were unfortunately not included, but it was still better than the iterative approach to a goulash meal of the Studierendenwerk in Hamburg, so you were able to eat it.

Well filled we decided to go to Burg Falkenstein, where apparently frighteners were waiting inside from 13 o’clock on. The park was really trying to upgrade its dark ride, inside the dark ride you were sprayed with water and got caught by the only active actor.

While one novelty this year is of a consistently positive nature, the disfigurement of the great Mack log flume Teufelsfässer with the now trivial name Wickie Splash is definitely not. The ride is now designed in the style of the new animated edition of the series Vicky the Viking and features a colourful look, which is not yet matching with the overall style of the ride. In addition, the lighting of the newly equipped turntables is completely missing, which makes the ride much worse. The degree of wetness of the ride would have remained the same, had it not been for the constant efforts of the other passengers to shovel water into the back of the boat.

The meeting in the Holiday Park turned out to be absolutely great, especially since the group created a proper atmosphere here, which somehow couldn’t really be heard from the small splinter groups of the other forums visiting the park at the same day. Although we didn’t really manage to ride much during the visit, except for some permanent riders at Sky Scream at the end of the day, we visited every relevant ride that was on the way. At least I didn’t regret the long way to Palatinate at all and would not be averse to other meetings of this kind in the future.

What is your opinion about the Premier Rides Sky Rocket II Sky Scream at Holiday Park?  Just write them in the comment field below the report or in our social media channels:

Where the new children’s area of the Holiday Park was still under construction when we visited it at Easter a year ago and only operated a few of its rides, you can now find the completed themed area Majaland, an area designed after the famous children’s series Maya the Bee. In Majaland, you can ride on the back of Flip the Grasshopper, climb the Blütenenturm by leaps and bounds, get a little revolving worm on the Verrückter Baum (Crazy Tree) and get soaked to Majas Blütensplash while listening to a cheerful song. The latter unfortunately only in theory, because due to the temperatures not all of the available water cannons were in use, so that the Flying Fish missed its effect and thus remained far behind Solguden from the Danish Djurs Sommerland.

Also in the rest of the park a lot has changed and so the minimal redesign of the Teufelsfässer, by figures from the series Vicky the Viking, already looks really good. Here one should still adapt the old devil scenes at the two turntables to create a harmonious overall ambience.

Not all of the changes made by the Plopsa Group are positive, for example the area around the Expedition GeForce got a new floor covering, which made some of the previously existing atmosphere disappear, and the elimination of the trim-yourself path created a gap that should be filled as soon as possible. The Superwirbel is also entering its last season this year, to be replaced next year by a Premier Rides roller coaster.

On the one hand, all these changes are quite understandable, but the park lacks some attractions, so that an expansion of the portfolio would have been more advisable than replacing a roller coaster with a new one. The fact that the new roller coaster is a clone of the Superman Ultimate Flight roller coaster known from Six Flags Discovery Kingdom is a rather curious choice, because another family coaster would have strengthened the park’s image towards families, which won’t be the case with the more thrilling ride. Nevertheless, this novelty is making headlines and will surely attract some people to the park, and whether the promised target group will still be there remains to be seen.

What is your opinion on the theme area Majaland at Holiday Park?  Just write it in the comment field below the report or visit our social media channels: