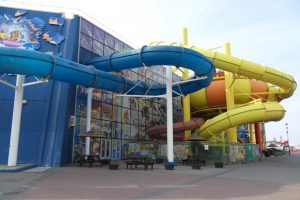 Sandcastle Waterpark Blackpool is the largest water park in the United Kingdom. The waterpark is located directly at the Irish Sea and offers great water fun even on rainy days. The water park has a large number of breathtaking water slides, which are also among the best of their kind due to their sometimes quite creative course design. In addition, the bath offers a large wellness offer.

The basic entry fee for the indoor water park Sandcastle Waterpark includes access to the bathing area with the adventure pools and some smaller slides. The four larger slides, Master Blaster, Sidewinder, Montazooma and Aztec Falls, which are grouped under the name Hyperzone, are subject to a surcharge.

We started the day on the Master Blaster of the same name. As far as I could see, it is a copy of the “original manufacturer” NBGS, which has an impressive length of 250 meters. We had to wait here for about a quarter of an hour before we were allowed to take a seat in the starting tub of this machine, which was obviously only used with single tires. While Tobias was sent off more or less immediately after the minimum distance, I received a particularly long instruction before the start – for whatever reason – of which I didn’t understand much in the general noise of the hall anyway, and which did not contain anything that could not be deduced from common sense or the signs. Tobias asked me at my final arrival in the exit area, where I had stayed so long.

The ride itself: wonderfully long, rocking and with considerable power on the uphill sections. Similar to the Dragon Blaster in Schlitterbahn New Braunfels, you experience the upward shots through the sliding tyres a little more forcefully than sitting in dinghies. Even the translucent blue tube part, which runs outside the building, is great fun. In addition, the surprisingly steep double down to the final is not to be underestimated – you gain so much momentum that you have to work hard during the subsequent braking process to avoid being thrown out of the tyre. This could be observed a few times. Definitely a very nice layout, but I’ve been spoiled too much by these LIM-rockets from Proslide – so the water jet version, even if it has a lot of power, as here at Sandcastle Waterpark, just looks a bit tired.

Next up: the halfpipe slide Sidewinder. We waited about a quarter of an hour. Like at the Stingray in Noah’s Ark, the lifeguard was roped up here and balanced barefoot in the start area – hats off!  The slide itself is as usual super funny! Due to the low wetting of the surface, you can rush up to the edges of the construction without much effort – simply great fun!

According to the theming we are on an adventure island – it is obvious from the coasterfreak’s point of view that there are two Dueling Dragons here, too. In Blackpool, these are two parallel steep-helix turbo tubes, through which you’ll just get smashed. The red one (which, seen from above, starts on the right, but comes out on the left at the bottom) is noticeably more extreme, since the decisive “death swing” is simply much more abrupt than with the neighbour – Tobias also had to realize this with a laugh during a second comparison slide. In the green track the joints are also a bit worse finished – a rather unpleasant experience for your back. The red tube is without question the true winner.

The Thunder Falls are the oldest slides in Sandcastle Waterpark and consist of a yellow and a blue bodyslide. The yellow one is certainly the more interesting one, as it has some incredibly tight S-curves, which make you swing around, but also make you very slow – it seems that the slide suffers a bit from the Alpa-Run-Syndrome of Alpamare Bad Tölz. The blue side offers the rounder sliding experience with its wider curves and punctual speed ramps, but slides a bit more bumpy due to the more pronounced segment joints.

Aztek Falls is a funnel slide for double tubes and one of two slides that start from the highest point in the bath from a separate slide tower and come along in an Aztec theme. Here, the waiting time was a good half hour, but I would also say that it was fully worth it. In my opinion, this was the absolute highlight of the Sandcastle Waterpark. Judging purely from the shape of the bowl, this is definitely the best tube funnel I’ve ever slid – the starting pipe definitely provides the necessary momentum and with Tobias’ and my combined fighting weight we had four laps together in no time. By a courageous push-off manoeuvre from the one funnel middle wall I even managed a fifth, before we went down the corkscrew exit and the extremely crisp final chute back to the discharge basin. An amazing ride!

The second slide in the tower complex is a narrow turbotube called Montazooma, which is slid headfirst with mats. You can almost imagine a proslide mat racer, which never turns into a wave track – it’s absolutely crazy how you are partly pressed on your stomach and thrown up into the curves. Definitely another favourite at the Sandcastle Waterpark! And furthermore an insider tip: even on this full Sunday there were phases where mats were still available, while at the neighbouring Aztec Falls you always had to wait at the run-out for your tube. The queue situation in the uppermost part of the tower is a bit unfortunate in Aquatica terms (on the right you queue for the funnel, on the left for the mat slide), but in the queue-tested Great Britain with its somewhat more intelligent and also more communicative public, this was really not an issue.

Besides the big slides we also tried the smaller Treetop Water Chutes (flat triple family racers) and the stream canal, after that it was time to move on and start the journey home. The Sandcastle Waterpark as a whole has not really excited me, but this is probably due to the Sunday crowds and the very loud and hectic atmosphere in the big hall. The Caribbean-tropical design is very inspiring, the slides are actually all good for something and with a little less crowd and therefore possible repeat rides I would have had a great time for sure. But because of the high entrance fee (especially compared to the neighbouring Pleasure Beach) and the limited the time of the visit, I will keep this pool in my mind with mixed feelings. But as Blackpool is scheduled for 2018 anyway, it will be almost self-evident that a return visit is possible in the near future if the the park is less crowded.

What is your opinion about the water park Sandcastle Water Park?  Just write it in the comment field below the report or visit our social media channels: