I should have known it better. When I got an e-mail by American Airlines regarding some possible tornadoes over Texas on the night before my departure, I should have checked immediately if my flight was cancelled or not. On the next day at work, it hit me like a stroke as my flight from Charlotte to Dallas was indeed cancelled.

Luckily, the rebooking was easy and straight forward. Instead of an evening flight, my departure was now set in the afternoon. Conveniently, the airport Akron-North Canton is located nearby our development centre at the other side of the interstate. To my luck, my luggage was still in the condo. So, I drove back to the condo and said goodbye to the wife of my Croatian colleague, as well as my own colleague and his wife, as their flight was in the afternoon. The planned dinner was cancelled, but I’m sure we’ll see us in Croatia soon.

Back at work, it was time to say goodbye to each of my American colleagues. A short time later I was already at the airport. After check-in and security, I sat at the bar of the Great Lakes Brewing Company and waited for boarding. The beer of the Cleveland micro brewery is absolutely recommended, especially the Double IPA tastes fantastic. Here I had only the normal IPA, which is also damn good.

Another beer later, the plane was ready and it went on the relatively short distance in the direction of Charlotte. Although I only had one hour transfer time, I managed to catch my flight to Dallas without any issues. The airport in Charlotte is a great one.

Arriving at Dallas Fort Worth airport it did not take long until I had my luggage in hand. With a shuttle bus we went to the Rental Car Center, where I picked up my car at Budget. Although I had already completed everything on the German website, we went through the whole process again, whereupon the car was about 80€ more expensive than originally thought. Sure, I’ve had to rent the car a few hours earlier; but I did not really understand it in retrospect (especially since the actual rental period has not changed). The advertised price for the one-way fairy was now $ 50 cheaper, but overall I found it all quite strange. Nonetheless, there was no real alternative to Budget as the one-way fee was the only one well below $ 500 and a multi-flight tour would have been more expensive.

Since I did not have an American Sim, the navigation was always with offline maps from Google Maps. This works fine, especially since I was in a traffic jam only once or twice during the entire tour. I recommend to turn off the use of toll roads when doing a similar trip. The Express Lanes and Turn Pikes are certainly very handy if you want to get from A to B quickly, but if you are travelling at the same speed on the mostly parallel Interstate, you can also save some money. Interestingly enough at my whole tour, only the toll roads at Fort Worth would have been used if the feature would have been activated.

Originally, I wanted to begin my tour at the theme park Six Flags Over Texas, as it was already open on Maundy Thursday and Good Friday. The amusement parks in San Antonio, however, only on the weekend. After booking the flight, I realised that some other destinations would not be open on the planned day, so I had to reschedule a bit. Instead starting of by Dallas, my tour should begin in Amarillo just 360 miles down the road. Therefore, I spent my night in Decatur, which was about an hour from the airport. On the way, the storm started, so the way was pretty well lit due to the whole lightning happening in the distance.

The Best Western Decatur Inn was the only Best Western on the tour and also the only motel I did not really need to leave the highway for, as the driveway to the hotel was right on it. It was my first contact with a typical American motel and my first impression was so far positive. The room was well equipped, the bed comfortable and the car parked just outside the door. Even through the world has gone down during the night and the television has reproduced the thunderstorm warnings in a continuous loop, the stay really good. 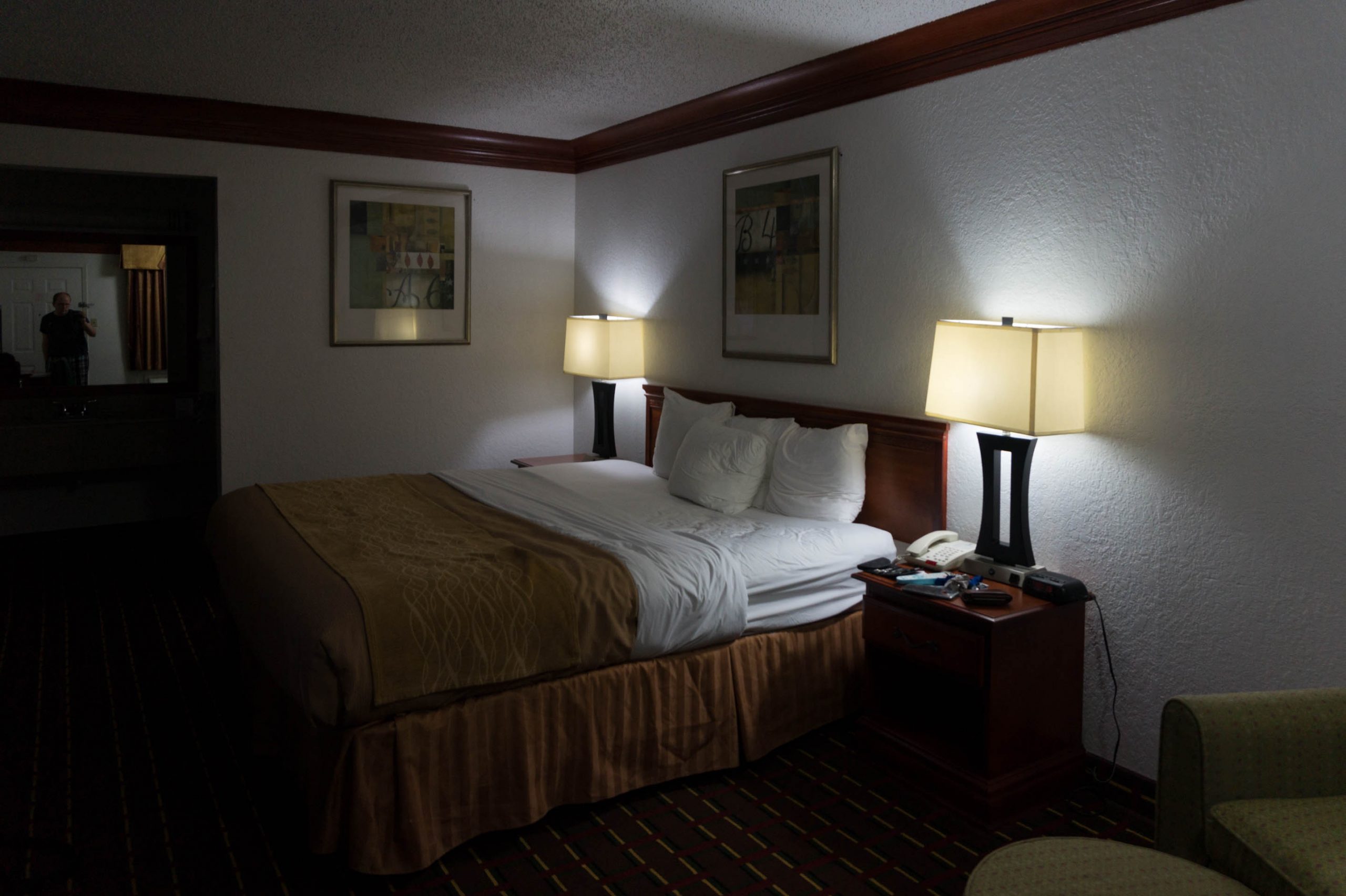 The breakfast the next morning then introduced me to the unsatisfying world of the American continental breakfast: Homemade waffles, some cereals, some pastries and lousy coffee all served on cardboard dishes garnished with some plastic cutlery for the environmentally conscious target group. I can’t image any places in Europe offering such wasteful breakfast, not even the really cheap hotels do that. However, the Best Western tended to offer the best breakfast on the tour, but overall the breakfast in each hotel was crappy.