Adventure Island, located directly on the English North Sea coast, is one of the most extraordinary theme parks in England. Since 1976, people have been enjoying themselves at the amusement park in the English seaside resort Southend-on-Sea near the capital London. Due to its numerous self-constructions and the extraordinary friendly staff, the park is a bit out of line even in England. Despite or even especially because of its insider tip character, it is one of the best parks in Britain and home to many world-class attractions.

Fun Fact #1: The park held the nudist riding world record in the Guinness Book of Records on the Green Scream roller coaster for a very long time.

Fun Fact #2: The theme park is home to many in-house designs, including the Time Machine: an enterprise-like ride with rotating gondolas.

Highlights of the Seaside Amusement Park The reinvention of the Tivoli Coaster The small roller coaster on the roof 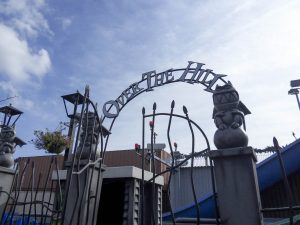 A steep and fun ride The Enterprise with a guaranteed twist