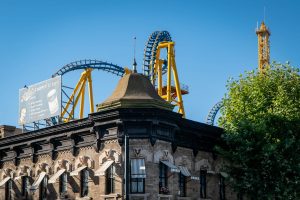 Parque Warner in San Martin de la Vega near Madrid is one of the largest theme parks in the country. Originally opened under the name of Warner Bros. Movie World Madrid, the theme park is a direct offspring of Warner Bros. Movie World in Australia and therefore has a very interesting history. For the Ciudad de Ocio (Amusement City) initially planned by the State of Madrid, the American theme park group Six Flags (until 1998 a Time Warner company) was awarded the contract, whereupon they developed and operated the park.

When Six Flags parted ways with its European theme parks in 2004, Time Warner took over their shares in the theme park. After several years without profit, the construction company Fadesa took over the shares of the state under the condition that in the future Madrid-based Parques Reunidos would manage the park for the next 10 years. Fadesa, however, shortly afterwards went into one of the biggest bankruptcies in Spanish history. Parques Reunidos, in turn, managed to steer the park in the right direction and over time took over 95% of the park’s shares, with the remaining 5% still held by Time Warner. The park’s attractions are as exciting as its history. San Martin de la Vega is home to some of the best roller coasters in Europe, such as the Giant Inverted Boomerang Stuntfall or the floorless coaster Superman: La Atraccion de Acero. Parque Warner Madrid also offers a wide range of family-friendly rides, breathtaking water rides and shows that are well worth seeing. Fun Fact #1: The roller coaster Coaster Express was originally opened as Wild Wild West and had a very large waiting area with some interesting features below the station. A roller coaster car with an ejection seat can still be seen in the station today.

Fun Fact #2: All Looney Tunes figures, which are located in the water park Parque Warner Beach, were once part of the vintage car ride Cine Tour in the studio area of the theme park. The ride with the bride