Due to long queues in and especially in front of the Wunderland Kalkar I had to drop an intended trip to some Dutch parks at short notice, but since the Lost Temple, the last untested German novelty of this year, was waiting within a radius of about 70 km, it was quite bearable. To my own surprise, I got a free ticket instead of the 50% discount I had hoped for with my Fort Fun annual ticket, so that the way to the Movie Park Germany was already worthwhile at that time, although it was unexpectedly full thanks to the first sunny weekend in weeks (but unfortunately Kalkar was also). 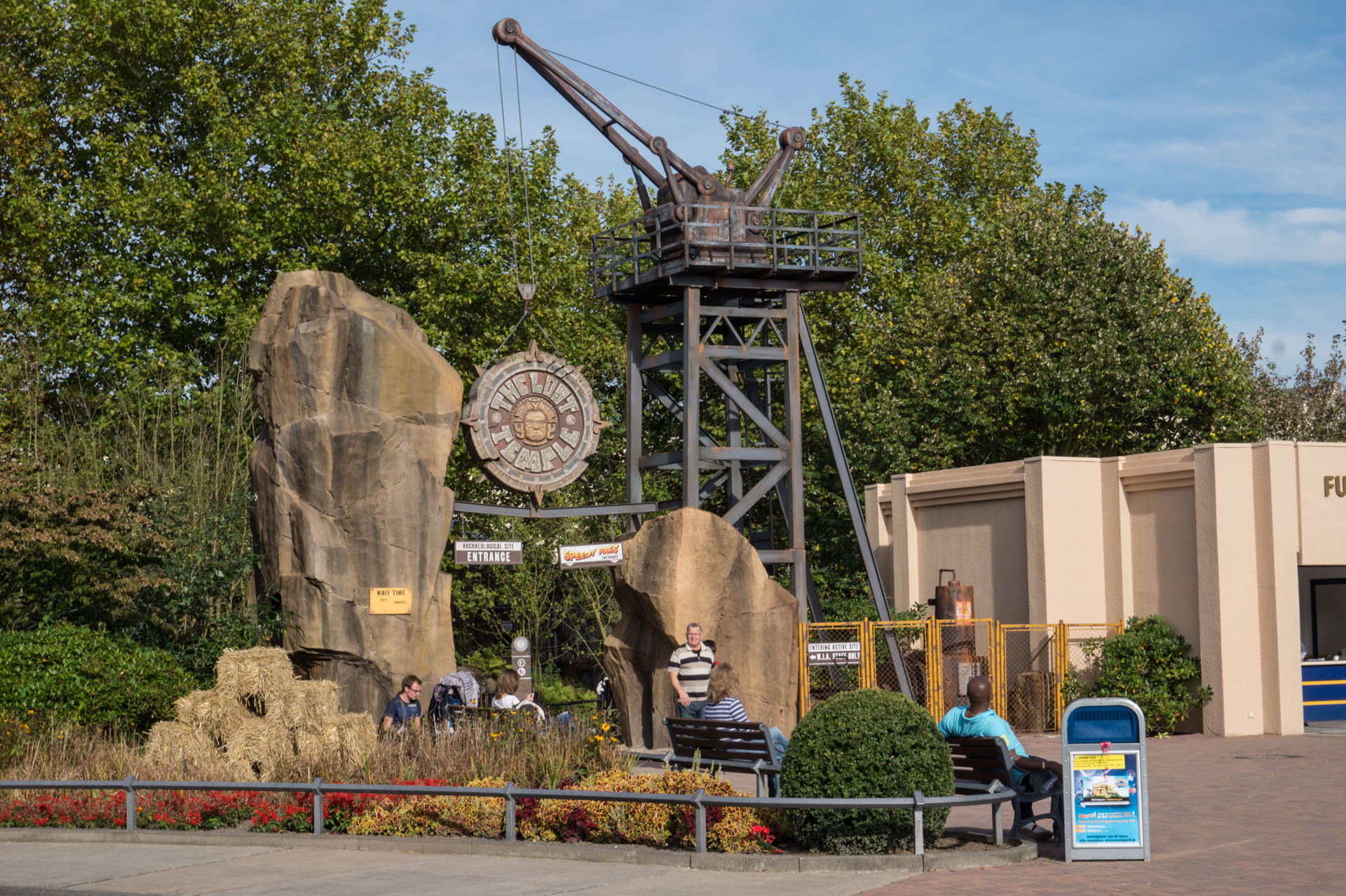 Arriving at Movie Park Germany, I first concentrated on the compulsory program, so that the way led directly to this year’s novelty, the Simworx Immersive Tunnel Lost Temple. Fortunately, the waiting time was limited, so that I only had to wait a few minutes for the elevator. The safety instructions, held in three languages, were very annoying, especially since they were sufficient for every second load. Finally arriving in the elevator, after another speech, the descent is relatively slow and with rather simple effects, even the elevator at the traveling haunted house Psycho with the asynchronously running rollers seems more convincing. To my own astonishment, the elevator actually was a real one, and thus, after leaving the gondola, one got out in a different environment that is thematically very outstanding. Relatively quickly, one went through the empty queue that could show a hot surprise right in the first room until one was stopped by a chain. Now for minutes absolutely nothing happened, which is to be called negative, after all there were not even signs of a co-worker. By means of simple possibilities, one could make the waiting time in this part of the queue more pleasant, even if it was only due to an expiring timer. After the now already longer waiting time, one got some 3D glasses in one’ s hand, whereupon one could listen to a safety instruction in three languages again. In the following room one was finally divided into the rows of seats and a preshow was held. When you could finally board into the train, the departure was delayed only by the slow handling.

Shortly after the sides of the car were folded down, the car started to move and so we drove into the Lost Temple. Shortly after that the film was started and despite the static position it always felt like accelerating forward. This is where the strength of the system becomes apparent, because there is absolutely nothing to criticise about the actual technology of this large capacity simulator. The movements are all smooth and well coordinated, so fortunately you don’t get sick as quickly as with the simpler 4D simulators in various theme parks. The film is partly sharp, but mostly very spongy, the 3D effect can hardly score any points, it rather worsens the picture massively. The actual story is free of meaning and can be compared to the story of the computer game classic Tomb Raider II, after all, they had a temple-like environment with dinos in it.

Although dinosaurs have become extinct since the end of the 1990s, at the latest shortly after the third Jurassic Park film, some small parks, such as Erse Park or the Tolk-Schau, have kept the dinosaurs alive. That a big park like Movie Park Germany is trying to jump on the dinosaur direction is strange, but it makes sense considering a fourth part of the Jurassic Park series. At least you can still revise the film quality of your own attraction until the movie release next year, so that you can enthuse some visitors for the topic as a pioneer and at the same time as a free rider.

At least from a technical point of view the Lost Temple is a very interesting ride, which only suffers from the lack of quality of its movie. But since this is a problem that is quite easy to handle, I’m sure that the attraction will be able to make a significant quality leap in a few years (if not already next year). Most visitors already leave the ride satisfied, only one little boy was disappointed, after all the dinosaurs were not real. Beside all the bigger novelties this year, the Lost Temple can at least hold its own against Arthur – the Ride from Europa Park, the competition this year was also very strong with Flug der Dämonen, Chiapas and Sky Scream.

What is your opinion on the Immersive Tunnel Lost Temple? Just write it in the comment field below the report or on our social media channels.