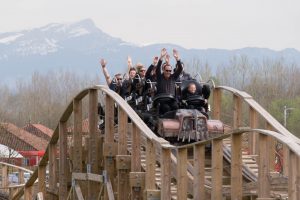 Walibi Rhône-Alpes in Les Avenières near Lyon in the beautiful Rhône-Alpes region is a medium sized family theme park in France. Founded in 1979 as Avenirland, the amusement park can look back on an eventful past. Two years after its opening, Eddy Méeus (founder of the Belgian theme park Walibi) took over a major share of the park together with a French manufacturer of amusement rides. Differences of opinion between the two parties led to Meeùs holding all the shares by the end of 1985.In 1989, the park changed its name to Walibi Rhône-Alpes. With the take over by Premier Parks in 1997, the park was expanded massively. In the past years and under leadership of the Compagnie des Alpes, the park regained its decision-making authority. Since then, the park surprises on a year to year basis with the addition of interesting rides and attractions.

Fun Fact #1: The water park Aqualibi, situated right inside the theme park, was the first water park of the group.

Fun Fact #2: The Walibi brand was known throughout France through extensive advertising on the Luxembourg radio station RTL – although the advertising was always aimed at the Francophone Belgians. The Radja River was on everybody’s lips. One year later, Avenirland changed its name and opened their own Radja River. A successful move, which secured the future of the theme park.

Highlights of the Water and Theme Park

The water park in the theme park

The Space Shot with the extra portion of airtime