Wiener Prater in the heart of the state capital of Vienna is an amusement park run by several showmen. The park was opened to the public in 1766 and since then has been considered one of the oldest amusement parks in the world. Since 1825, the northern part of the Prater, on the grounds of the Wurstelprater, has been home to a large number of restaurants, gaming booths and rides, which create a very diverse and colourful atmosphere.

Fun Fact #1: The Wiener Riesenrad was built in 1897 to celebrate the 50th anniversary of the throne of Emperor Franz Joseph I and was one of the largest Ferris wheels in the world at that time.

Fun Fact #2: The artist Edwin Lipburger built the Micronation Republic of Kugelmugel in 1971. The background to this is the spherical construction of the house, which theoretically tangentially touches Austria at only one point and is therefore independent. After 11 years in Lower Austria the house was moved to the Prater in Vienna.

A rollover experience of a special kind

The classic with the six inversions

One of the best Vekoma roller coasters 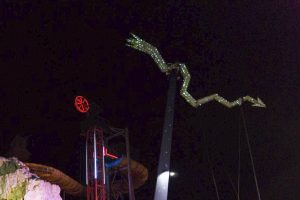