After riding the Thunder Dolphin at Tokyo Dome City Attractions, we were drawn across the city to ride what used to be the only spinning coaster with launch and inversion at the large Sega theme park arcade Joypolis. Unfortunately, we arrived at the indoor park a few minutes after closing time, so we left a little disappointed. Not too bad really, after all we are young and will get there eventually, but it was getting pretty late. We didn’t reach the hotel in Yokohama until after 10 p.m., which wasn’t so bad in itself, but seven hours later we had to take the train for the next big leg of the journey.

Although the Fuji-Q Highland amusement park is one of the best known and most visited amusement parks in the country, it really sucks to get to. Basically, there is only one possible train route and a handful of bus routes to the park. Unfortunately, both options take quite a long time coming from the Tokyo and Yokohama areas. So for us, it was a three-hour train ride early in the morning. We spent the first two hours on the JR on the way to Ōtsuki, where we then changed to the Fujikyū line, which took us directly to the station in front of the park.

From there, we made our way to the hotel on the other side of the park. Instead of quickly scurrying across the car park of the theme park, however, we followed a route description from Google Maps. As pedestrians, this was a bit adventurous, because parallel to the Chou Expressway, we first passed an industrial area before briefly following a main road. Via a subway that no one had used for years, we reached the park area and soon the park’s bus station. At least we had the opportunity to capture a hitherto unknown angle of the Fujiyama roller coaster. 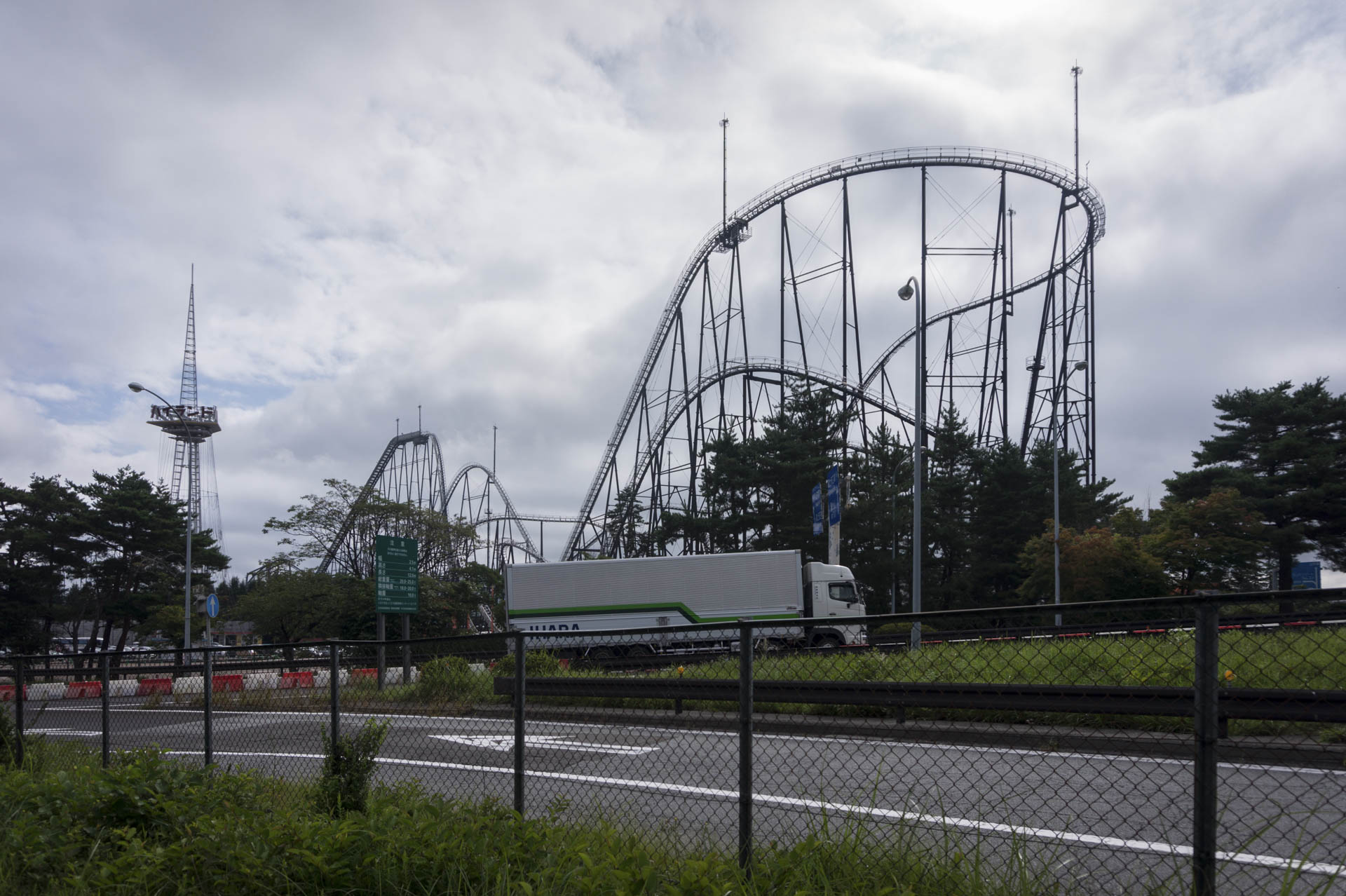 We had been advised to stay at the largest of the park’s three hotels, the Highland Resort Hotel. We booked it half a year in advance, as it is quickly sold out. In fact, however, contingents were released again and again, so a booking would also have been possible at a much later date. By rebooking, we were able to save a few euros, but the hotel was still by far the most expensive of the entire trip. Unfortunately, due to the perks, we didn’t have much other choice and Nicolas pushed me like mad to book this hotel, especially since he really wanted to try an onsen. Since the other hotels in the area are not necessarily that much cheaper, I let myself be persuaded; after all, we could have experienced the full programme together. At least that was the case until the uptight South German noticed that you enter the onsen completely naked.

To be honest, even today I still wonder how people can be like that. Being naked is normal and to be treated as such. On the other side of the world, one could have risen above oneself. But no, one doesn’t even try. In this respect, Nicolas can be very happy to have become a teacher, because in other industries he would have simply exposed himself with such an attitude. Think of the metalworking industry, for example, where such behaviour not only inevitably brings social ostracism. I, at least, was very disappointed in my fellow traveller, but enjoyed every single second in the resort’s onsen.

The hotel itself is super. It is expensive (and therefore still cheaper than any resort hotel in the Europa Park), but really great. Unfortunately, with the best will in the world, we couldn’t see Fujiyama from our room, but it would have been there if it hadn’t been for the clouds. The onsen facilities were simply magnificent and for the first time on this tour I felt 100% relaxed. Especially after an exhausting day in the park, it was a relief beyond compare and will be a permanent fixture on every future trip to Japan. Give me a hot spring and I’m happy. Give me some delicious Japanese food and I’ll be blown away. This country is great!