The last day of my rollercoaster trip through France was to start with a bang. The roller coaster 1066 – not to be confused with the refreshingly charming Lager Kronenbourg 1664 – caught my attention a long time ago, when I saw the first pictures completely by chance on the roller coaster database Rcdb. It was clear, I would have to visit this place sometime. In the meantime, one or the other novelty was added in Festyland, but I didn’t know much about the amusement park, which was founded in 1989, until my visit.

On the outskirts of the small town of Carpiquet near Caen is the access road to Festyland. You can park your car in the car park directly next to the national road 814; the park itself is on the other side of this road and can be reached via a wide tunnel, which however has a simple corrugated iron look instead of the discotheque of Gardaland. The entrance area itself is inviting and immediately transports you back to the time of the Belle Époque. After a pleasant chat with the cashiers and equipped with the latest edition of the Festy Telegraph – the park’s rather elaborate guide to the amusement park – it was time to go exploring.

Past numerous children’s rides – including the National 13, which is unfortunately not named after the Périphérique of Caen, but after the road that leads to it – and the park’s cafeteria, you will immediately head for the park’s larger rides. The first stop is the small family free-fall tower La Tour d’Esnambuc, built by Zamperla. The ride on the Sky Tower offers a great view and numerous mouth changing hops, which should encourage especially younger park guests to ride it continuously.

I personally prefer to get my hands on a Soquet rollercoaster. It’s a good thing that the Drakkar Express has been smiling at us for quite some time now. The entrance of the ride is located in the elaborately designed Viking theme area, home of the park mascot and figurehead of the theme park. For this we turn left from the main path at the Chevauchée de Guillaume horse riding track.

The ride on Festyland’s oldest roller coaster begins with a left turn, after which the lift hill is reached after a straight stretch of track. Following the gradient of the terrain, the ride goes straight up. Here we enjoy the view of the surrounding area a little before we plunge into the valley. With momentum we now pass through a valley parallel to the main path, which has been beautifully set in scene with a small waterfall and a pond. Following the bend to the left, we climb a hill and plunge down again rapidly towards the ground. In Close Call with the vegetation on the left side we now pass through another hollow, where we also change direction for the first time. In a 270° helix adapted to the terrain, we gain some altitude, whereupon we cross the just completed route and immediately throw ourselves on the ground in a left turn. Now we race over a small hill at the back of the station, followed by the final helix in a shallow curve leading up and down. After a short climb the station is reached and the train is braked. A second round follows.

The Drakkar Express is a very nice children’s roller coaster of French design, but a little tamer compared to other rides of the manufacturer. The ride is great and can convince by its adaptation to the existing terrain. Unfortunately, the exit of the ride leads back to the main Festyland track, so that you have to walk around the final helix of the ride for possible repeat rides.

The next attraction on our circuit is the Air Race Miolnyr. This rollover ride made of 30t steel offers an exciting, slightly monotonous and absolutely dizzying ride with rollovers in a continuous loop. A great deal, for which the investment of one million Euro was absolutely worthwhile.

Next door, the children’s area of Festyland captivates in all its splendour. In addition to a small teacup carousel and a jump around featuring a frog design, this area is particularly impressive with its covered ball pool and the two novelties for this season. With the Rockin’Tug Niorty and the Troll Roll children’s railway, a really beautiful rides symbiosis has been created, which can rarely be found in theme parks. A really nice area, which will certainly appeal to the little ones.

Meanwhile, we return to the main trail, where we continue down the hill. Here you will find the Pirat’Ak rubber dinghy slide and the Cap’tain Roc boat swing, two classics that no French amusement park can do without. A little wilder, however, is the Disk’O Le Grand Tournoi. Pressure-packed and extremely fast, the disc takes you over the U-shaped track.

One level further up we meet more rides from Italian production. Apart from the chain plane Tourny and the Valhalla mountain and valley railway, the Eretic swing is particularly eye-catching. Typical for Zamperla, it offers a swinging ride with all kinds of airtime moments. Unfortunately, the Discovery type ride turns monotonously in one direction, which makes the ride not very diversified, although we are not on a HUSS swing. A pity!

So for the right shoot we have to go to another ride. Luckily there is a hydro lift from Zamperla in Festyland. Those who know these rides know what to expect here – everyone else will be absolutely surprised by the wild slide of this rafting ride: There are simply no comparable installations that get the hang of it.

The journey on Kaskade begins comparatively harmlessly. After a short bend to the right, the vertical lift of the ride awaits you, which takes you up quickly. Once there, the lift cage tilts forward and we immediately roll onto the water slide. With momentum we are now thrown into the first helix, whereupon we start to rotate constantly in circles. After a wild S-curve manoeuvre along the tower, we spin around in circles at an abnormally high speed, which makes the subsequent splashdown look like a game of Russian Roulette: you never know in advance who might be caught. A fun for the whole family! Now the quieter part of the trip follows, where numerous elements of a classic rapid river await us. In contrast to the prototype from the Italian Leolandia, the return to the station is a little more compact. You pass through a course full of hairpin bends and several zigzag straights before you are allowed to get off at the station, if you want to. Repeat rides are guaranteed.

Let’s get on to the roller coaster 1066, because the short train with the ram head is a truly remarkable ride. Built directly at the slope, this coaster uses it absolutely skilfully for its wild ride. Furthermore, the ride looks simply great due to the half-sided medieval scenery at the lift of it.

The journey begins with a right-hand bend leading into a tunnel. The ride begins with a right turn into a tunnel and is immediately followed by the ride’s lift, which takes us up quickly. Once at the top, we immediately descend the 17m high descent. On a steady slope we now race through the valley in a wide right turn. With momentum we then climb a hill, where a long downward helix awaits us. With full power we go through the following valley before we shoot up another hill. With a little bit of airtime we start the next shot. In a steep turn we make the last manoeuvre of the ride and rush through the deepest part of the ride. With a lot of verve we climb up the slope to the plateau, whereupon the braking distance of the ride already awaits us. Shortly afterwards we reach the exit position of the ride.

1066 is a very short roller coaster, but one with a very grand ride. The track is crossed with a lot of pressure and vigour. The ride characteristics are excellent. Here I would have liked to get on more often. Unfortunately, at some point the ride went into the lunch break and I had another destination on my list.

Festyland is an extremely beautiful and harmonious amusement park, which looks a bit like a Zamperla Wunderland due to its many rides made in Italy; but as is well known, this is not a bad choice. Coupled with some rides from Soquet, it is an excellent family amusement park that can entertain you for several hours.

What are your thoughts about the French theme park Festyland? Just write it here in the comment field below the report or visit our social media channels: 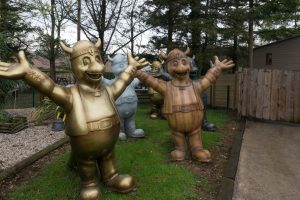 Festyland in Bretteville-Sur-Odon nearby Caen, is a small, family-run amusement park in Normandy, France. Opened in 1989, the theme park offers a very solid selection of family-friendly rides – most of them are made by the Italian ride company Zamperla –, interesting playgrounds, as well as some larger roller coasters and flat rides. 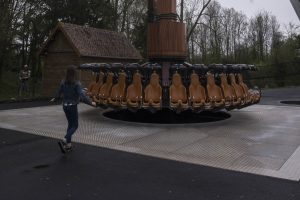