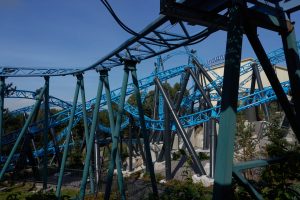 My first visit to the city of Helsinki was an unintentional one as we missed our flight to Ivalo after we stood a good 40 minutes on the runway in Hamburg due to the current constructions going on at the Finnish airport. We were put into the nearby Holiday Inn for the night and decided to get our diner somewhere in the city instead of the hotel’s restaurant.

A few days later, I returned intentionally to Helsinki in order to get to know the city a bit better. I booked a guided tour with Red Umbrella Tours but was not overly impressed by the tour guide. I left the group early and headed directly to the Tivoli Linnanmäki shortly thereafter.

When you approach Linnanmäki one of the first rides you see is the roller coaster Ukko – a Maurer Sky Wheel towering the entrance area of the park. This ride features a vertical lift which goes over into the sky loop element.

The Sky Wheel itself is a roller coaster experience that is quite difficult to describe. In the moment before you are relieved from the elevator upside down, there is a strange feeling in your stomach, which returns to normal within the first roll. This is followed by a descent with high centrifugal forces in the valley before you rush backwards through the valley again shortly afterwards in order to partially climb the sky loop element. After another pass through the station, the vehicle comes to an abrupt stop on the ride’s lift and is then lowered to the station again.

To be honest, I am not a big fan of Maurer’s Sky Wheels. The sensation is good, do not get me wrong, but they are not my kind of ride. The feeling of hanging upside down in 46m only hold by a lap bar is weird and not very enjoyable and the rest of the ride is just okay.

Past the great S&S Space Shot drop tower Raketi, we now head towards the oldest roller coaster of Linnanmäki: Vuoristorata. The name translates to or better said defines the term roller coaster in Finnish. It is the last of the four scenic railways by Valdemar Lebesch, who also built the two Rutschebanen of Bakken and Tivoli Gardens in Copenhagen.

Vuoristorata starts with a long curve leading to the left before the train engages with the cable lift. With a great view onto the roller coaster Ukko just in front, we quickly rise to the top to the lift. Another left curve follows before we dive towards the ground in a large drop. Now, we transverse the Figure-8 ride diagonally and climb a hill while doing so. On the front end of the ride, we now turn around in a curve leading to the right. We take off a bit on the double down, before racing over a large camelback. On the other side of the ride, we now take a left turn. This is followed by another double down leading into one more camelback. On the next hill we gently take another turn around. Parallel to the lift we now initiate the grand finale. Hereby we dive into a tunnel after another camelback. In darkness, we now pass the last curve before we reach the station of the ride and come to a halt.

Vuoristorata is a nice wooden roller coaster which offers a good amount of airtime, speed, and forces during its two-and-a-half-minute long ride. The scenic railway built in 1951 sure offers a great experience and should not be missed when visiting Helsinki.

One of the most interesting coasters of Linnanmäki is Kirnu. This Intamin Zac Spin is one of the earliest examples of a 4D coaster and resembles a large marble run. After the lift, the ride vehicle races towards the edge, plunges down, hits a high forced valley, and turns around on the next crest while the gondola can freely rotate around its own axis. Normally, a roll over is inescapable on the last hill of the ride.

Kirnu might just be a short ride, but also a very unpredictable and powerful one too, so you better not underestimate it.

In the large water tower, situated right in the middle of the park, you can ride the Zierer family coaster Linnunrata eXtra which opened in the year 2000 as Space Express. Nowadays, the ride is not only named after the Finnish word for Milky Way, but also offers VR goggles, which makes it eXtra special. I rode the ride without the glasses, which I immediately regretted. The theme inside is dark and not longer visible. The ride itself is very gentle and therefore without any surprises. Unfortunately, I did not have the time to test the ride with the glasses, as it started to have a queue shortly after my ride.

Back to the light, we quickly encounter the HUSS Top Spin Kieputin, which offered a short, but quite intense ride cycle. In the same corner of Linnanmäki, you can ride the dark ride Taikacircus, have a walk through the nearby funhouse or encounter a well-hidden Schwarzkopf ride called Mustekala at the end of a cul-de-sac.

The 75m high drop tower Kingi does not have the best reputation among theme park enthusiasts. Albeit the ride on the Italian made ride offers a very intense drop, the experience itself sits on the uncomfortable side. The restraints by Moser Rides are very tight and the seats themselves are not made for Northern Europeans as they are simply not wide enough. Therefore, if you do not want to squeeze yourself into the seats for a rather long period of time, you should be either very slim and short or still a kid.

Passing the equally high observation tower, we now step down to another level where another Italian made ride awaits us. Here, however, we find ourselves in seats with a little bit too much room. The Technical Park fying pen Magia offers some heavy rotation and huge forces. It is a fun ride, which does not create a dizzy aftertaste.

The spinning coaster Salama at Linnanmäki is a great example for an efficient use of space as it is located right on top of the rapid river Hurjakuru. As one of the latest spinning coasters built in Europe, it still offers the excitement of previous Maurer installations like Tarantula at Parque de Atracciones de Madrid or Spinball Whizzer at Alton Towers.

Salama begins with a short curve into the lift. Once at the top, the descents start with a tight turn leading into a curvy drop. With a good spin, we now cross the first valley and enter the large Immelmann turn, the track’s main element. Shortly thereafter, we climb a hill and find ourselves in the first block section of the ride. Another drop follows, whereupon we swirl over an inclined hill. After another upwards leading curve, we enter the second block brake. From here on, the hills get a little bit gentler. In a zigzaggy style, we now make our way towards the next block section. The finale of the ride consists of a downwards leading curve, a small hill and curve with a dip leading into the last brake section of the ride.

Salama is a great spinning coaster with an excellent spin. The ride offers a cool layout and a great pacing. Although the ride is quite short, it gives you a good repeatability factor.

Something you could also say about Hurjakuru. The compact rapid river by Intamin offers a refreshing ride through a well themed tunnel, various rapids, and along numerous water effects. Moreover, it also gives you an excellent view onto the spinning coaster above the ride.

Another ride which is located above the rapid river is the powered coaster Pikajuna by Mack Rides. Like many of the old-style powered coasters, the ride features a bunch of helices and curved sections in a rather compact layout. Unfortunately, the ride is quite slow.

The exit of the ride leads us directly to Tulireki: a Mack Rides E-Motion Coaster. The prototype coaster is a rocking sensation, as the ride vehicle can rock forwards and backwards, as well as sideways. Nowadays, only the sideways rocking remains.

Tulireki is a fun little coaster when you are sitting in the front row on the vehicle, otherwise the ride can be very bumpy and not as satisfying. The ride system was a good trial, but it did not work out as expected.

Right next door, you could ride the water coaster Vonkaputous by Premier Rides till the end of the 2017 season. Nowadays, this space is used for Taiga, the large Intamin LSM launch coaster which dominates Linnanmäki since June 2019.

The ride on Taiga starts with a launch into the first inversion. This is basically an oversized corkscrew, whereby the entrance to the element is initiated by a twist to the right while climbing a hill. According to the roller coaster database (rcdb.com) this element is a Zero-G Winder. With a lot of momentum, we now race through the valley and swivel over hill and dale in a large curve to the right. On the crest of a hill, we quickly change direction and race along the ground. After another change of direction, the second launch section is reached, and we accelerate towards the next element: a 52m Top Hat.

With an awesome view onto the city of Helsinki we now dive down towards the powered coaster Pikajuna. In an inverted airtime hill, we now cross the roller coaster Tulireki and experience a moment of pure joy before turning towards the ground again. In the next valley, we reach our top speed of 106 kph. After flying over a bunny hop, we head upwards and change direction in an Immelmann. Hereafter, we climb a left-hand bend into an s-hill followed by a right-hand turn. At a lower speed, we now swivel a bit from left to right, before plunging down to the ground for one more time. In an airtime hill, we enter an inclining left-hand curve, which releases us into the final inversion of the ride: a heartline roll. One last right-hand bend then leads us into the brakes and shortly thereafter the ride comes to an end.

Taiga is awesome. This coaster is simply terrific, and the layout is just perfect. Intamin did an incredibly good job by giving its masterpiece from Phantasialand some new elements and include a bunch of outstanding inversion.

Linnanmäki is a great amusement park and one of the best Tivoli, I visited so far. The atmosphere within the park is great and the attractions are amazing. You simply cannot have a better day in an amusement park while supporting a large child welfare foundation at the same time. You are doing something good while having fun and that is something you will not find that often.

What is your opinion about the Tivoli Linnanmäki?  Just write it in the comment field below the review or visit our social media channels: