Universal Studios Japan (ユニバーサル・スタジオ・ジャパン) in the city of Osaka is one of Japan’s largest and busiest amusement parks. It is the fourth most visited theme park worldwide.

With the increasing success of the Universal Studios in Hollywood, plans to open a similar attraction all around the globe started. While the studios in Orlando were under construction, sites for another park in Europe, as well as in Japan were also considered – including Nippon Steel & Sumitomo Metal Corporation (NSSMC) sites in Kitakyūshū and Sakai. While the Space World theme park was built in Kitakyūshū, the Sakai site was abandoned in favour of an urban development project in Osaka. At the end of 1994, Osaka Universal Planning Inc. was founded and two years later renamed USJ Co., Ltd. Arnold Schwarzenegger broke ground in October 1998 and Universal Studios Japan opened in March 2001.

In the first year alone, more than 11 million visitors came to the park, an unparalleled success. However, the number of visitors dropped to 8 million in the second year and stabilised at this level until 2011. With the construction of the children’s area Universal Wonderland in 2012, the average number of visitors changed to 10 million. In 2014, the inauguration of The Wizarding World of Harry Potter theme area was followed by a jump in visitor numbers to 12.7 million visitors and 13.9 million visitors the following year. In 2021, the highly immersive Super Nintendo World theme area will open to the public.

Universal Studios Japan is famous for its numerous shows and attractions, including the Hyper Coaster Hollywood Dream – The Ride and the Flying Coaster Flying Dinosaur by B&M. In addition, the theme park always offers new and exciting event attractions that can be tested for a short time in the park. In particular, popular manga are taken up. The roller coaster Space Fantasy also gets a new theme quite frequently.

If you want to experience the park for yourself, the easiest and fastest way to reach the amusement park is by train to the JR station Universal City. From here there is only a short walk though the leisure centre Universal City to the theme park.

Fun Fact #2: You can experience the ride on Hollywood Dream backwards, when queuing up for the backdrop ride.

Harry Potter and the forbidden Journey

One of the best hyper coasters, especially in the Backdrop variant

Nagashima Spa Land (ナガシマスパーランド) in Kuwana nearby the city of Nagoya is one of Japan’s largest and busiest amusement parks. The park located on Ise Bay is part of the Nagashima Resort, which originated from a newly found hot spring in 1963. A temporary set up bath proved to be very popular, which is why the Nagashimakankokaihatsu Co, Ltd was established in the same year with the aim of developing the spring, now known as Nagashima Onsen, for tourism. In November 1964, the Onsen was opened to visitors, followed by the Nagashima Hotel a month later. In 1966, the resort was further expanded with the opening of the second hotel and the theme park Nagashima Spa Land.

The Nagashima Resort quickly became more popular, which is why the third hotel followed as early as 1970. The resort now consists of three hotels, the Nagashima Spa Land amusement park, the Joyful Waterpark, the Nagano-no-Sato gardens, the Anpanman Children’s Museum, the large Mitsui Outlet Jazz Dream Nagashima outlet centre and the Yuami-no-Shima hot spring. Every year, around 5.8 million visitors come to Nagashima Resort. 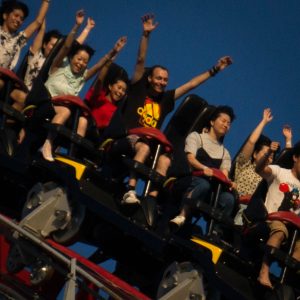 Nagashima Spa Land is famous for its large number of roller coasters, including the Steel Dragon 2000 – the longest and one of the fastest steel coaster up to date. With a height of 97m and a length of 2.5km, this roller coaster means serious business for every theme park enthusiast. Apart of this steel monster, Nagashima Spa Land is a very nice park with an superb selection of rides and attractions. It also features a highly immersive children’s area themed to Peter Rabbit.

If you want to experience the park for yourself, the easiest and fastest way to reach the amusement park is by highway bus from the Nagoya station. The nearest JR train station is Kuwana. From here you can take a shuttle bus directly to the park.

Fun Fact #1: Due to its large number of roller coasters and its location on an island right next to the sea, the park is often referred as the Cedar Point of Japan.

Fun Fact #2: The park houses a very large number of swing based rides. In no other park worldwide you can swing up to the sky in so many different variants.

A Wild Mouse in a Double Pack

Past Highlights of the Tivoli

The ride through the prop forest Joyful Waterpark (ジャンボ海水プール) or Jumbo Ocean Water Pool is the water park of the theme park Nagashima Spa Land (ナガシマスパーランド) in Kuwana near the city of Nagoya. It is one of the largest water parks in the country and offers a very large number of outstanding water slides, as well as a huge wave pool, two lazy rivers and a hot spring pool.

Fun Fact: The Tornado Slider is home to 12 water slides by WhiteWater West. It is the last remaining slide tower of its kind in Japan. A bunch of fantastic bodyslides Don’t be fooled by the size