Walygator Grand Est in Maizières-lès-Metz, Lorraine is one of the biggest theme parks in France. It started as Big Bang Stroumpf – a theme park dedicated to the Smurfs – and later became part of the Walibi Group. After some years the park was sold to French showman, who started to expand the park’s portfolio rapidly by placing many used rides into the park. Nowadays, the park is operated by the Spanish theme park operator Aspro Group.

The park features a lot of family-friendly rides and quite large roller coasters, e.g. the wooden roller coaster Anaconda or the giant inverted coaster Monster (s. picture). The park also offers a lot of shows and entertainment during the year.

As the park currently only operates during the french school holidays and on weekends, make sure to check the date of your visit in advance.

Fun Fact #1: The roller coaster Monster was once operating as Orochi in the Japanese theme park Expoland in Osaka.

Fun Fact #2: The park features its own train station. You can reach the park with the TER and even safe some money if you present your train ticket at the ticket booth of the park. 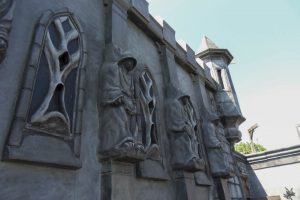 The creepy maze with the Fun House